turn on suggested results
Auto-suggest helps you quickly narrow down your search results by suggesting possible matches as you type.
Showing results for
Search instead for
Did you mean:
Options
FGC2
Level 2
15 13 0 3
Message 11 of 18
438
Flag Post

I spent a couple of days repairing the HP  ProBook 650 G4 Laptop to the same condition as before. Microsoft System Restore caused both HP Sure Click 4.1.8.2387 and Chrome Version 78.0.3904.108 (Official Build) (64-bit) to break. Since the default browser was set to Chrome, It had failed to startup, and I switched to using Firefox for the default browser. 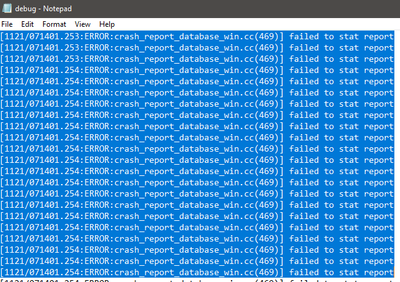 I continued testing for what caused it to break after the  System Restore Point operation was performed and learned that Microsoft Windows 10.0 OS no longer backs up the System Registry when a System Restore Point is saved. That could certainly be an issue that would affect the HP Sure Click Software's health.

I was still unable to reinstall the HP Sure Click 4.1.8.2387 software to a healthy operating condition. 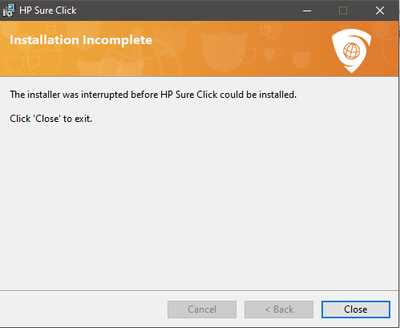 There was a few more tricks left to getting the program installed which I learned later in the testing...

Here's what HP Mentions about this issue.:

"Some files are missing from the HP Sure Click installation. This may be a result of doing a Windows System Restore. Download and install the latest version of the product to fix the corruption -"

That was where I left off before performing the System Restore and allowing the installation of the latest version sp99441.exe which worked healthy right up until the system reboot after System Restore.

I soon learned the Microsoft Windows installer program would not allow it to be installed. 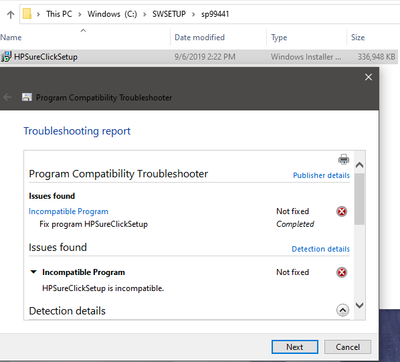 I figured out what had happened.

The Version Check was bypassed and retested for a successful installation. 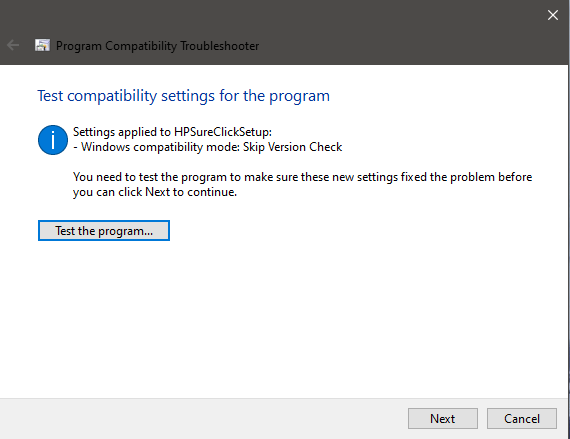 However, just like before, during installation it appeared to stall before initialization at the HP Desktop Browser Console (unhealthy). 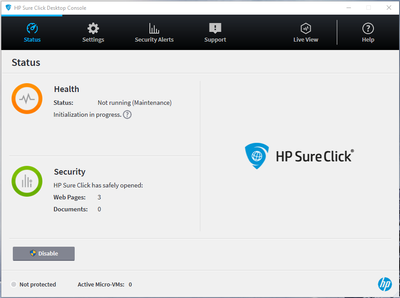 During investigation with Task Manager tool,, I determined the problem is with the default setting for UAC Virtualization during installation..

Initially, both executable programs BrHostSvr.exe and BrDesktopConsole.exe have UAC Virtualization Disabled during the installation process.

I set UAC Virtualization to Enabled immediately after I noticed the inaction for initialization on the HP Sure Click Desktop Console.

A brief  time later, the installation completed, and the HP Sure Click Desktop Console became Healthy. Afterwards, I reset the UAC Virtualization back to what it had been, Disabled. The next day after shutdown, I noticed that a reboot was required for an update to be installed for the latest version 4.1.8.2387 I allowed the reboot and hoped for the best. The HP Sure Click Software program seemed to be upgraded correctly, and most important of all, it was now Healthy. 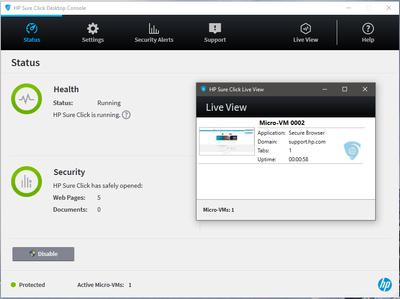 After restarting and waiting for several minutes, the HP Sure Click Desktop Console 4.1.8.3408 Status was initialized and Healthy (protected) again. 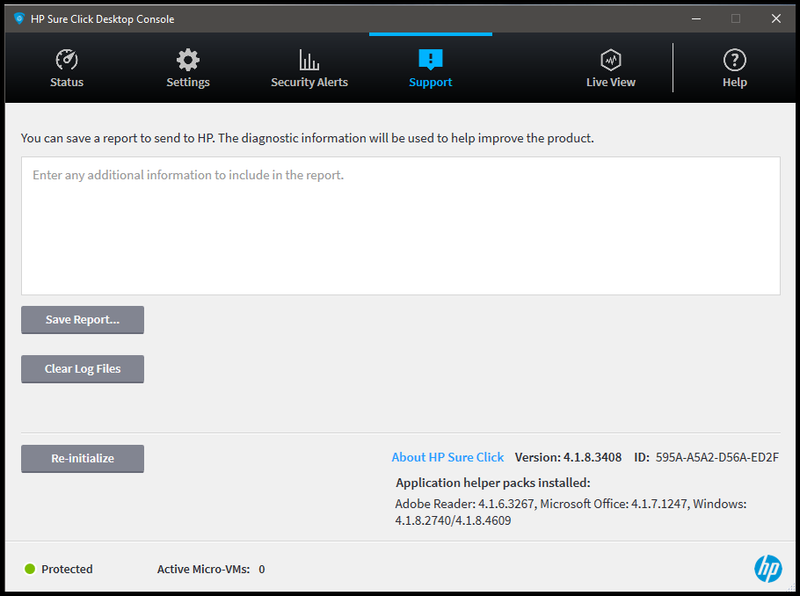 Seems like the significant change in the latest update are related to the Secure Browser SBX: Edge, SBX:Firefox, and Chromium Versions used with  Bromium's /HP Sure Click Desktop Console and Secure Browser and now the new version's generationCount is now equal to 1;

Going over the documentation for the HP Sure Click Desktop Console and Secure Browser Version 4.1.8.x, I've noted ways in which it works. Each tab appears to be in isolation using the micro-VMs; Notice the count at the bottom of the HP Sure Click Desktop Console Status Screen which indicates how many "Active micro-VMs" are currently in use. For each tab open in the Secure Browser, the count increases by one. and if you go ahead and open the Live View option they should all be displayed within it as a small sized live image rendition. 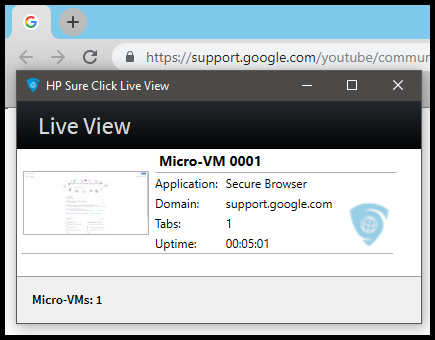 After you close the HP Sure Click Secure Browser, the count returns to zero and the isolated URL has completely been vanquished to the bit-bucket. 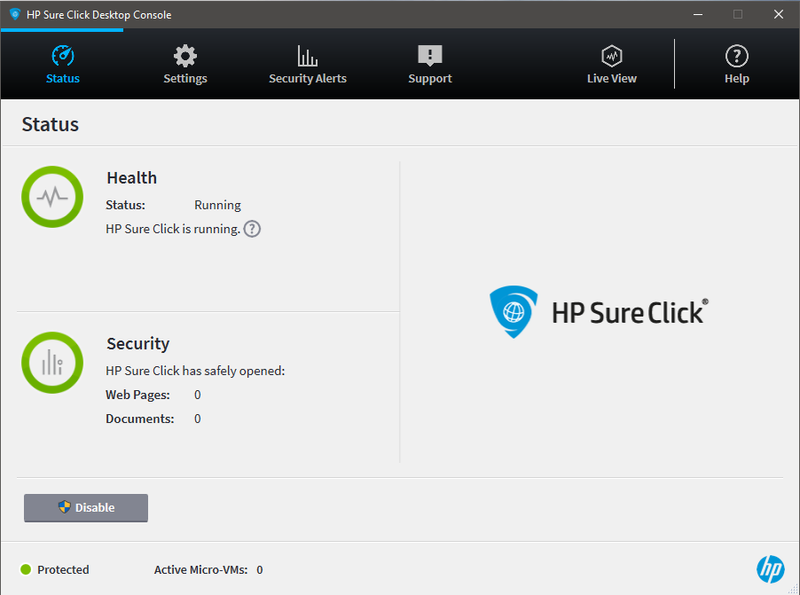 The latest minor version change update for the "HP Sure Click Software  4.1.8.xxxx" is using the same softpaq filename sp99441.exe as before.

That confirms my suspicion HP keeps using the same Softpaq Number until the next major release.

The HP Sure Click Security Software Version 4.1.8.3408 is still running, and the latest generationCount is now set to 13. 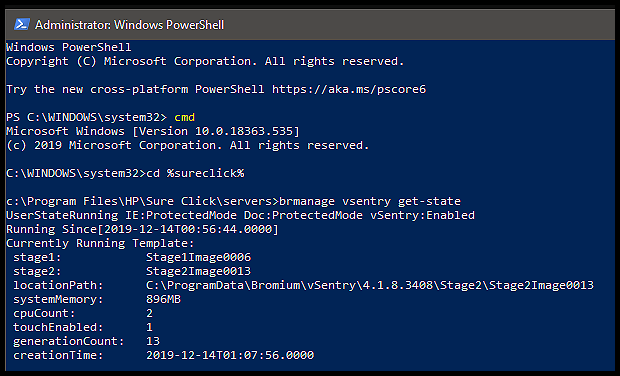 Although I've apparently opened in excess of 350 web pages (safely), I do not see where any Adobe Acrobat Reader opened documents have been verified, or checked by HP Sure Click Version 4.1.8.3408 ; 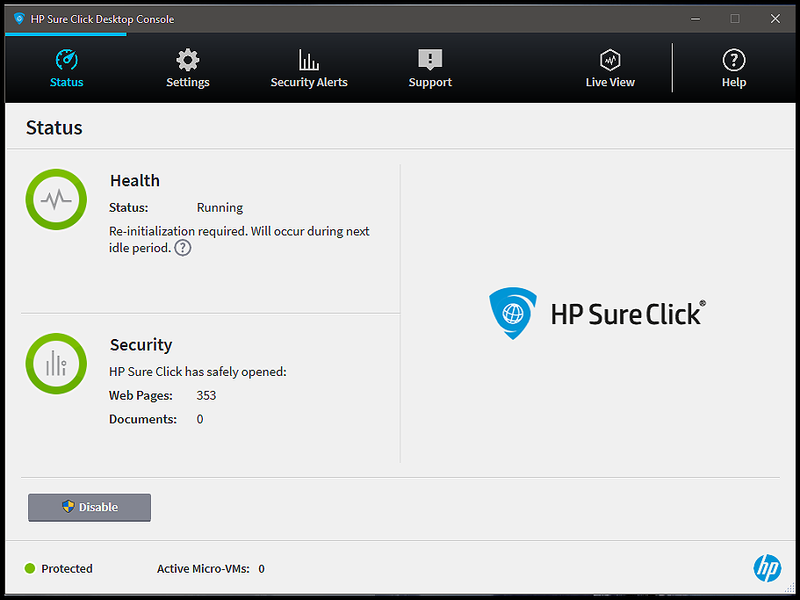 A necessary re-initialization completed successfully, and I did not notice any issues with it;

For those who still have not updated their version of HP Sure Click from Version 4.1.8.2387 to Version 4.1.8.3408;  Using the command line, you should run the BrInstaller executable program file to see what issues may need fixing to meet the minimum requirements. 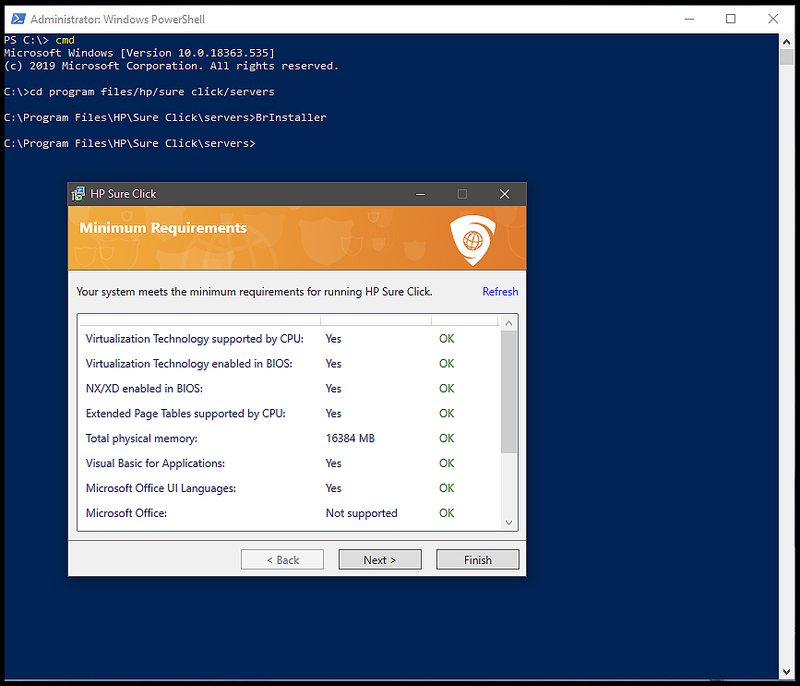 The good news is, I was finally able to successfully open an Adobe pdf format document using HP Sure Click Secure Browser Program. 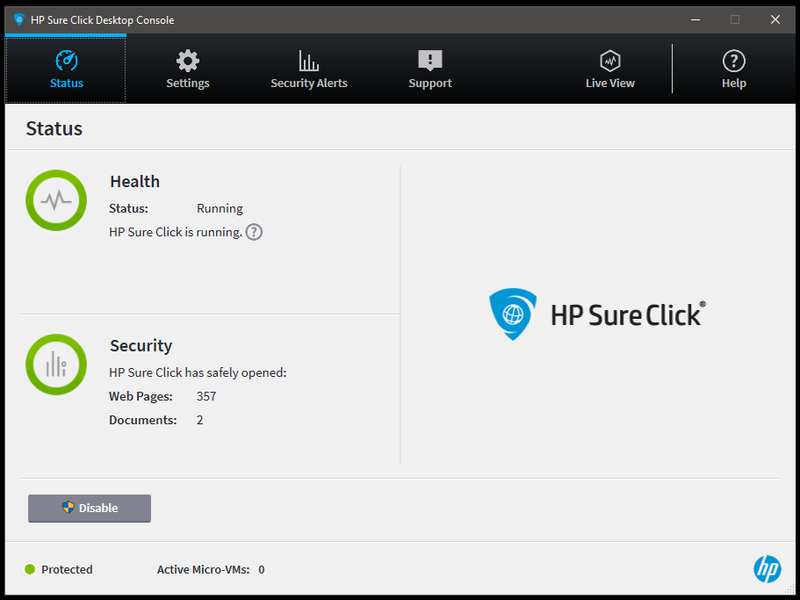 Even though I already had the Adobe Acrobat Pro DC program installed;

The workaround appears to have been installing Adobe Reader DC; 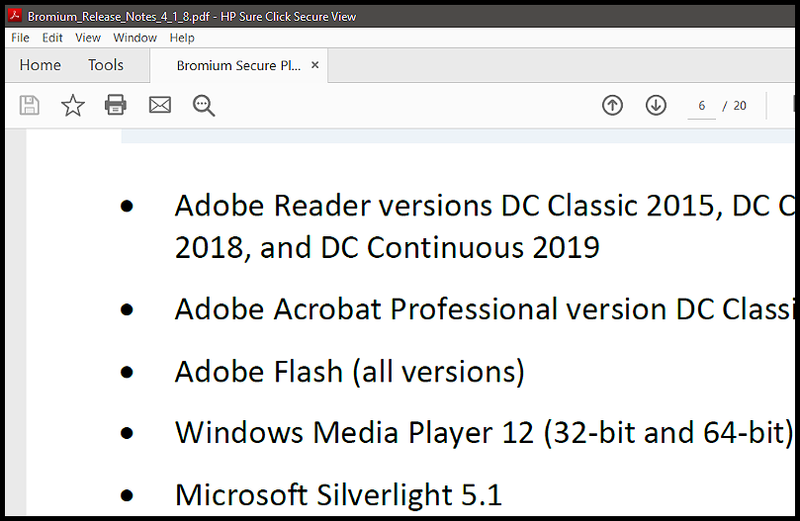 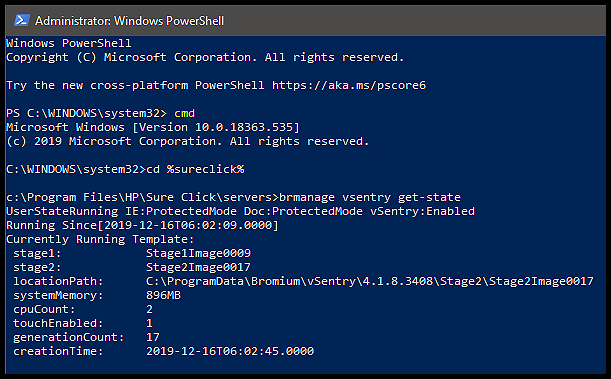 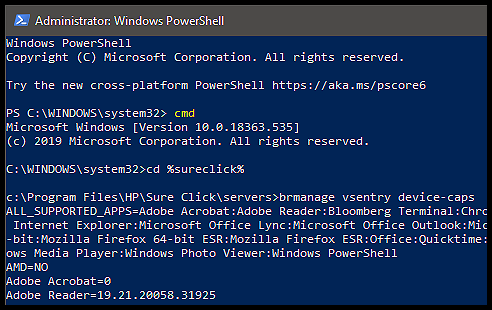 During testing, I accidentally broke a Network Connection and had to use a previously saved System Restore Point; The first restore point  I selected did not repair the OS, and the second one I attempted to use did, which brought me closer to having the original version again, which was not broken.

It was an experience seeing in action for the first time, the isolation capabilities of the HP Sure Click Security Software 4.1.8.3408 and its " HP Sure Click Secure Browser" application. For me, it helped prevent a Phishing Splash Screen popup from infecting my HP Probook 650 G4 Laptop computer through an attempted redirection to a malware dropping website. I simply closed the tab, which was opened up, and that closed it.

"HP Sure Click secures your computer when you browse the Internet or view untrusted documents.

When HP Sure Click is installed, it opens websites and untrusted documents in a micro-VM (virtual machine). The micro-VM acts as a container that prevents malware from infecting your computer. If a website or document tries to infect your computer with malicious code, it will be contained within the micro-VM. This means your computer will not be infected. If you see malware attempting to run, close the browser tab or document to end the micro-VM session and destroy the malware."

If I had been using an unsecured browser with this laptop, a Phishing Splash Screen would have been frequently popping up for me to click on.

But, simply closing the opened tab, allowed me to shut it down before any damage had occurred. 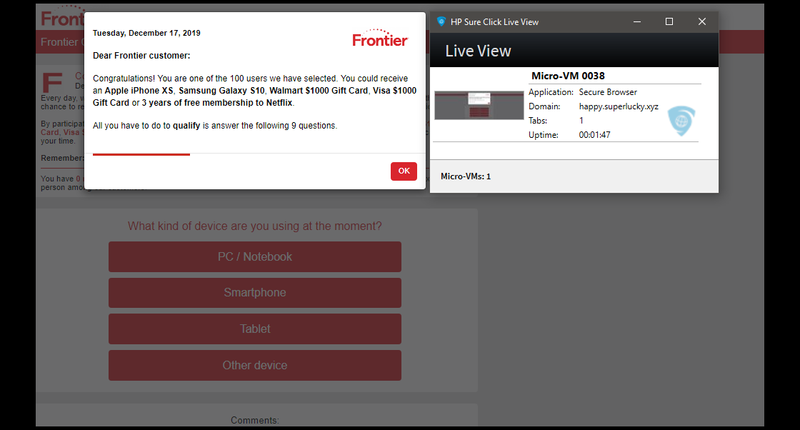