It has been a while since anyone has replied. Simply ask a new question if you would like to start the discussion again.
Highlighted
Rafalle
Level 1
3 2 0 0
Message 1 of 16
9,291
Flag Post

I wish to find a suitable cooler for my HP Z600.

The original part it is no longer available.

In fact I wish to change both of them, the original one it is already 5 years old.

So if you have some experience , maybe you can help me.

Bolt connection it is a square 80 mm.

The spring bolt a 3mm?

The original cooler has a height of 95mm

The space to insert the cooler, betwen socket 0 and 1, it is also different.

From my point of view even U3 cooler it is too big.

A cooler for 75 USD, second hand, is just insane.

All I ask was from your experience if you manage to insert another cooler.

I noticed the vga coolers are 80x80mm on the base, very rare they execeed 50 mm in heigh.

Anybody try to insert this cooler:

It is expensive , but it is brand new, at list

I will unscrew te bracket , reversed in position and will make a test.

Cost me a fraction, around 15USD.

I could not  find a intel base cooler, with copper insertion. They become rare without notice, intel plans to drop this socket, my opinion has a long life. My Z600 support 2 hexacore resulting 24 core!

I am in UK , and my workstation went down couple times just because of heating, I just remove the lateral panel, during the games and everything was OK.

I just inserted a GTX 660(MSI with heatpipes) and activate the hypertreading CPU from bios.

Should be a way to adapt the 775 coolers for 1366 socket, a frame or something else.

But I have an overheating problem. And now im desperately looking for a solution to cool down my CPUs. At full load it heats up to 100°C

I noticed that the company that refurbished it, used non original fans on the heatsink

Do you think are those the problem? They get really loud.

Im also looking for a water cooling solution, so any help would be apriciated!

I do not have experience with the z600, having two z420 and a z620,  but looking at images of z600's and considering the way the z620 is configured for cooling- quite careful clearances and special position of nearby compoents and air path, my suggestion is to first consider buying  new or used HP CPU coolers on Ebay or similar. For example:

The dimensions are crtitical.  The CPU cooler towards the rear panel has a very limited clearance to a tooless panel that appears to be the fan/shroud for memory cooling.

Otherwise,  as the z600 is Socket LGA1366,  it's possible to consider aftermarket fan .heatsinks or liquid cooling solutions, but take great care in selection as regarding dimensions. Personally, I'd use the standard HP coolers and install carefully using a good thermal paste such as Arctic Silver.

To the OP..... good luck in finding a non-HP heatsink that will fit on the Z600's motherboard amongst the components and side airflow shrouds.   There is the usual smaller "Mainstream" heatsink/fan for the Z600 and these were common and thus relatively cheap used off eBay.   And then there also is a Z600 "Performance" heatsink/fan which can be used with all power levels of the processors that are certified by HP for the Z600.  Those larger heatsink/fans are uncommon, and expensive used off eBay.  Both the Mainstream and Performance ones were custome made for the Z600 to HP specs by Foxconn.  The wiring of the Performance type of fan is a bit different, and that is how the motherboard knows that a Performance heatsink is attached.  The 4 spring loaded screws for each heatsink are 6-32, not M3.  The Mainstream and the Performance heatsinks for the Z600 and the Z800 are identical as are their spares and assembly part numbers.

The HP Z600 motherboard is a tight custom designed space..... there are two sockets, and one of the two requires the Performance heatsink/fan built for HP by Foxconn.  The other socket can accept that also, or a "Performance" level heatsink/fan that was also  built by Foxconn for HP for the single socket in the Z400.... to make ithat fit over one of the two Z600 sockets you only need to bend down the thin rear metal airflow deflector a bit.

Thank you guys for your input!

I recieved 2 original heatsinks from the company i bought the Z600 (they gave me a 1 year warranty).

Pretty much all HP parts have two part numbers for the same thing.... an Assembly and a Spares part number.  Thus, you can search with google for both and may have more luck with one than the other.

Performance:  535588-001 = 463991-001      These are for the hotter processors such as the X5690 running at 130W max TDP, and were not used a whole lot in Z600/Z800 builds because those hotter processors were so expensive at the time.  They, thus, are much more difficult to find and are expensive even used.  They have larger surface area, run a larger fan, and are specially offset from the socket they are screwed to so that they just barely amongst the other motherboard components and side air flow shrouds (see pictures below showing that offset).

I have posted on how the wiring of the fan is different between fans for a Mainstream versus a Performance heatsink, and that you can spoof the motherboard into thinking it has a Performance heatsink/fan attached when it is only a Mainstream heatsink/fan if you modify the Mainstream fan's wiring a bit.  This can be unwise unless you know what you are doing, and you should monitor whether your processor gets too hot for your type of work.  For example, if you wanted to run two X5690s in a Z600 for checking email and surfing the web you might get away with that spoof.  🙂

Now, comparing the Z600/Z800 Mainstream versus Performance heatsink/fans side by side.... these both screw onto  the LGA1366 sockets used in these workstations: 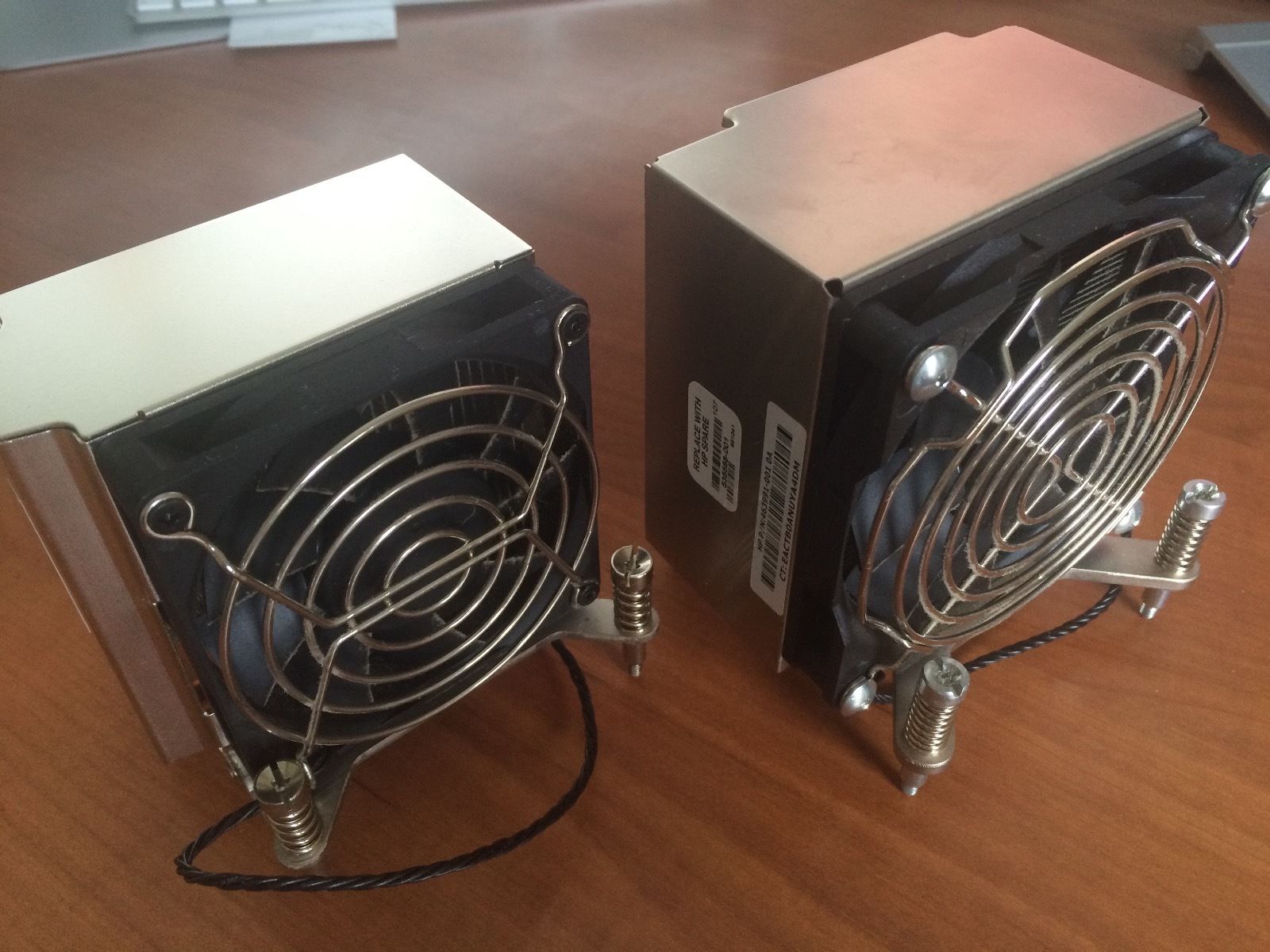 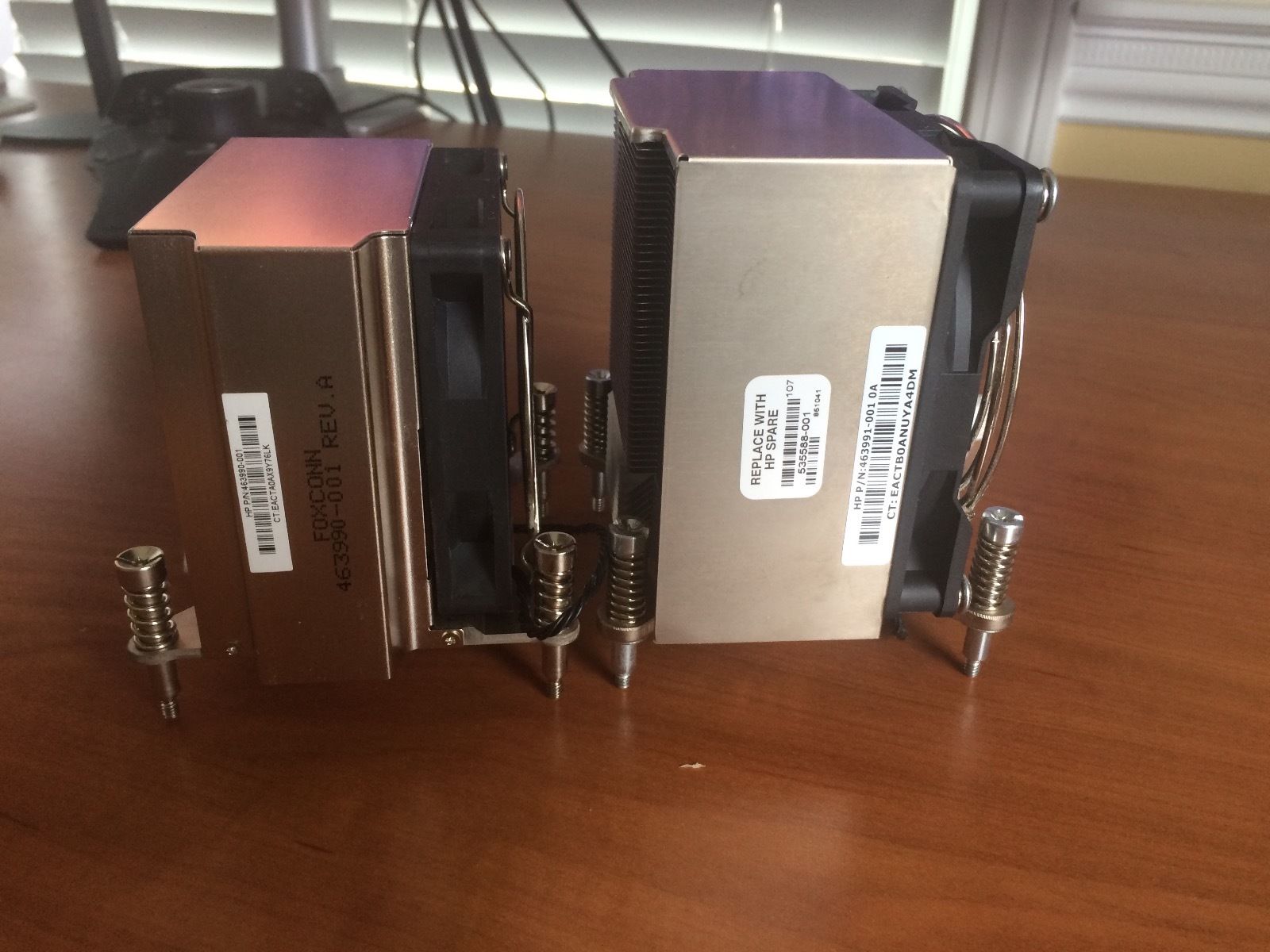 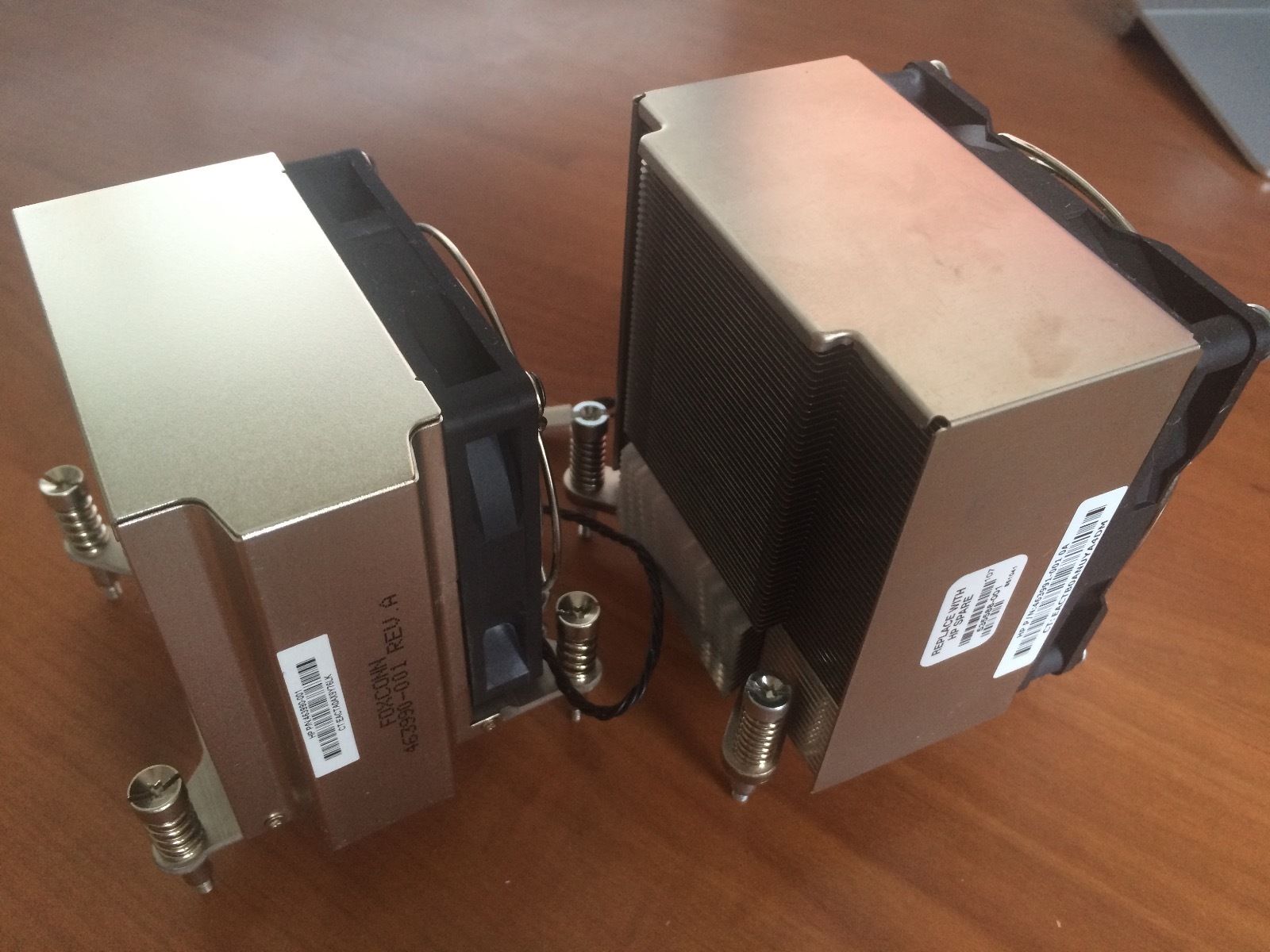 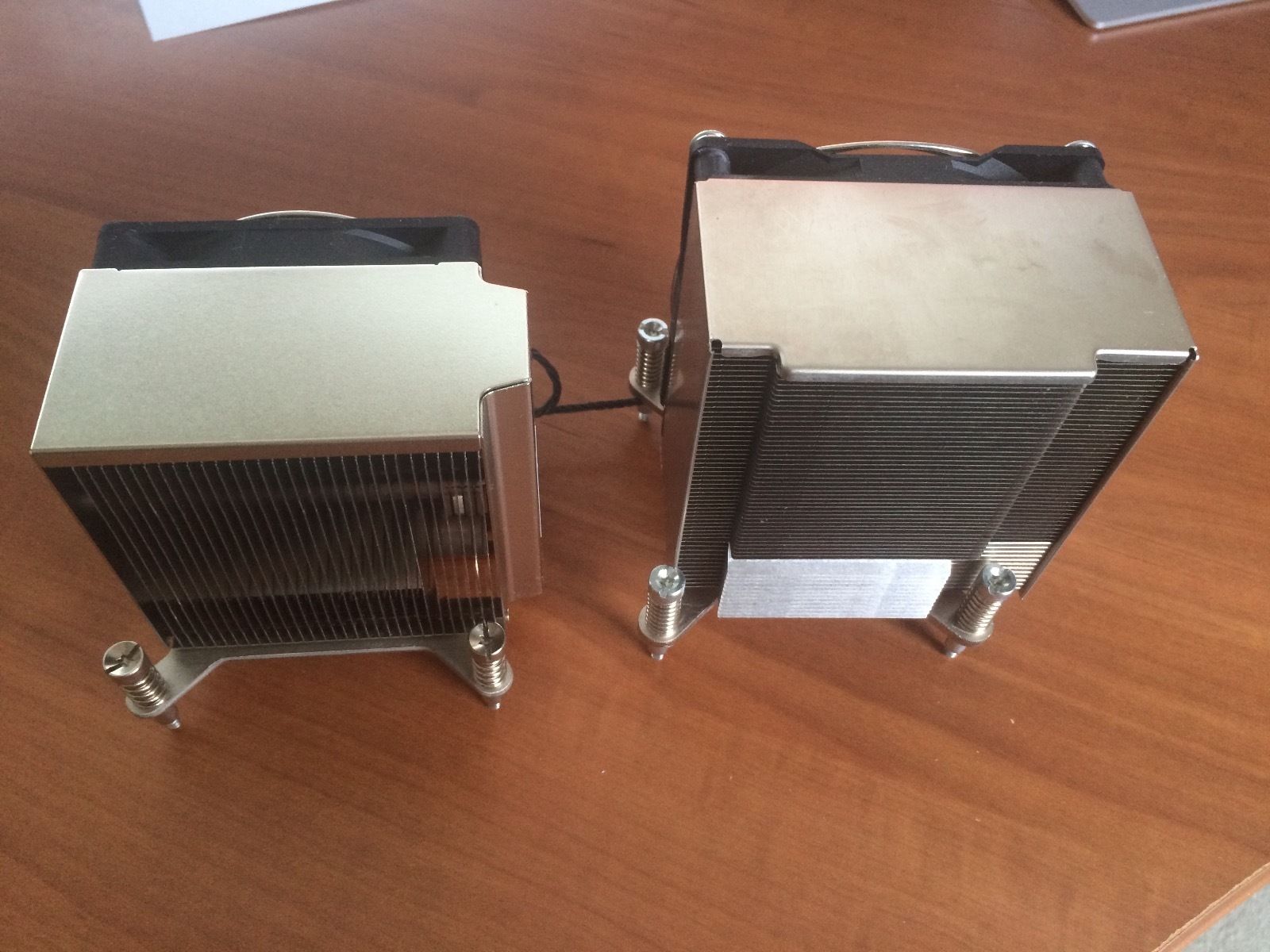 And what about this part?