Is it possible to install a GTX 1080ti graphics card in the HP Z600 Graphics Station?

Hello! It's 2021 and there was a question about upgrading my workstation. I am engaged in video processing and rendering. I'm using HP Z600 Graphics Station, HP 0B54h Motherboard, Xeon E5620 CPU, BIOS update 06/23/09. 650W power supply. Is it possible to connect a 250W video card Nvidia GTX 1080TI? The cable for connecting the video card from the power supply has a power of 150w, so I want to know whether it is possible to add residual power using an adapter from the SATA cable from CD-Rom. If someone has faced a similar problem, or knows the answer, I will be very grateful!

The Precision 390 is one generation older than the z600 with similar processor clock speeds, and importantly, is also PCIe 2.0 / SATAII / USB2.0.

Given the z600 platform limitations, in my view, a GTX 1080Ti would waste  a substantial proportion of it's performance on a 2.4GHz / DDR3-1333 /PCIe 2.0 configuration.  Plus, given the current cost of a blower-type version- in the US at least, for example:

> of $560, the GPU in this example may be worth more than the subject system.

If a high level of 3D and/or compute power is required, for a far better cost /peformance solution, consider changing to an HP z420 v2 system using a Xeon E5-1650 v2, similar to this completed sale:

If you keep the z600, consider upgrading the processor to a faster clock speed, for example Xeon X5675 (6-core @ 3.07/ 3.46GHz).  The X5675 may be used in a dual processor configuration.  Ensure that the CPU cooler is the highest rated for the z600.  Also, consider a Quadro K2200, K4200, or GTX 4GB in the  7th, or 9th series graphics card.   With graphics card, consider using the blower fan model.  Multiple fan gaming cards exhaust most of the heated air into the case , thereby heating the processor whereas blower cards exhaust out the PCIe mounting bracket.

As much I like the LGA1366 platform, having had Dell Precision T3500 and T5500, if the budget allows, in my view, an LGA-2011 E5-v2 system is much better long-term investment. Every day, Windows and modern applications become more performance demanding.

also, the z620 uses a multirail power supply not a single rail as such connecting a 250 watt video card to the supply might overload the GPU rail on the supply

checking the HP quickspecs shows a HP approved quadro k6000 card that draws 225 watts, however that setup is spec'd for systems with the upgraded 800 watt power supply

bottom line, not recommended by HP for  the stock 600 watt supply

As mentioned, the NVIDIA stated minimum power supply for the GTX 1080 Ti is 600W.  That specification is formulated to accommodate sustained 100% loads.

sorry, you are correct about the z600  however the rest of my post stands regarding installing a 250 watt supply in a HP z600/z620 workstation (the z600 max wattage is lower 150 watts)

the nvidia RECOMMENDATIONS on power supply wattage is just that a recommendation, it does not and will not apply to all systems.

since the HP workstations do not use a single rail supply, and have non ATX motherboards/power supplies the nvidia recommendation should not be used, and the HP power draw ratings should be used

last if you have a generic motherboard/power supply, know that many cheap consumer atx power supplies wattage listings are wildly inaccurate,..... and those units actually can only output a fraction of the listed wattage which is why name brand models and reading reputable reviews on supplies if highly recomended

Power up to the card from the slot is 75W max.  There is only one HP PCIe supplemental 6-wire cable feeding out of the powersupply top surface and it is rated to provide up to 18A, for a max wattage of 216W from the cable.  Those carry more than the ATX standard (75W) due to HP engineering improvements.  So, 75W from below + 216W from the cable = 291.  The card you're talking about is 250W.  Then, you add in a feed from the Z600 line that includes a 4-pin Molex connector.  We did this for another gaming card for my son's souped up Z600... but it only needed 2 6-pin plugs.  You'll have enough breathing room, from my perspective, with those 3 power sources all added together.  You need to do a good job on your part choices, however.

HP makes a high end 6-pin to 8-pin supplemental power adapter that we've gone over ad nauseum here in the forum including part numbers, sources, and difference from cheap thin-wired lousy generic ones.  There are a few brand name ones that are good too.  I would only run one of the HP ones for your 8-pin card power plugin, attaching that adapter to the P10 6-wire 18A cable that comes directly out of the power supply into your card.  Then I'd supplement that with a high quality 4-pin Molex to 6-pin plug for the second power feed into the card.

Shifting from big power hungry hard drives over to modern SSDs can give you added breathing room, and at least your boot drive in bay "0" should be a SSD.  The Z600 is a SATA II workstation but you can run SATA III SSDs in them also.  Personally I like the Intel 545s SATA III 512GB drives, but you could also buy the Intel 320 series 600GB drives used off eBay (which are SATA II native).  Sometimes you can find a great price on the 600GB ones, but with the price of more recent SSDs coming down so much it would be better to just buy a used or new Intel or Samsung SATA III one.  We had some problems with the Samsung SSDs in these workstations early on but later firmware and running a DBAN wipe on them fixed that.  I like the Intel Toolbox software, and they recently replaced that with the "Intel Memory and Storage Tool GUI" which is W10 engineered.

I'll post a pic of the wiring for that Z600.  He has hammered that workstation for years now, and never a blip.  Your card will draw more than his, but I agree with Bambi that you should be fine if you go with the HP 6-to-8 adapter and a good Molex 4-to-6 adapter.  We added in the HP USB3 card and an eSATA adapter so he had USB3 and eSATA speeds at the rear, and 2 USB3 ports at the front.  He finally built a custom rocket ship this Christmas with Covid spare time so the Z600 will probably move up to the library and finally kick the Z400 there out of its position of honor.

Here is how we did the wiring.  You want the official single Z600 PCIe supplemental power cable to go through the HP 6-to-8 pin adapter into the 8-pin power port on the card.  That second power feed from the 4-pin Molex line is frosting on the cake.  Here are the pictures: 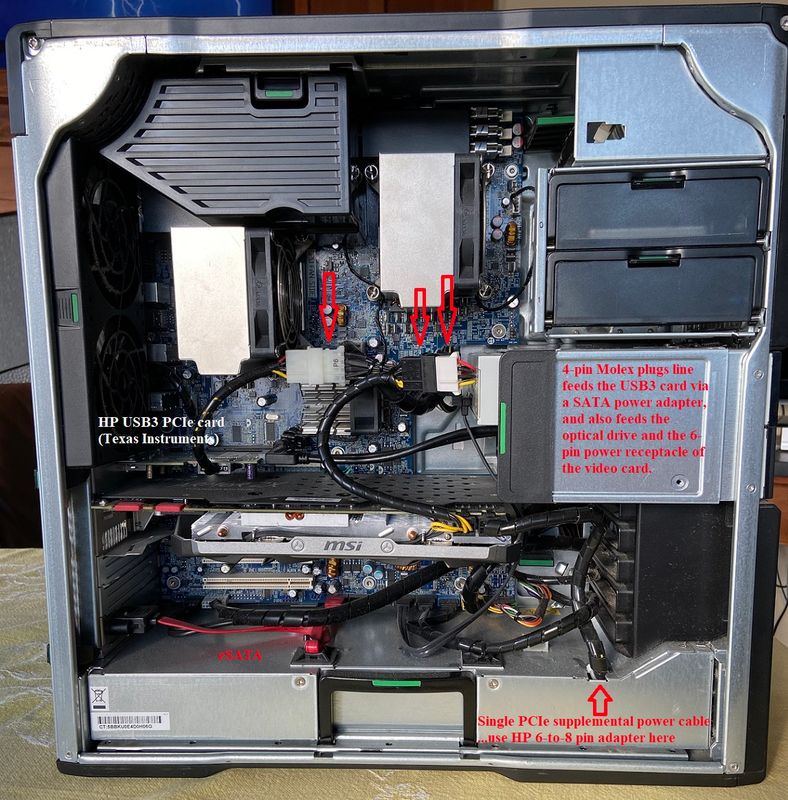