Yep, no problem with the Z600 being able to boot from a properly configured USB drive.

Again, I use my USB2 rather than USB3 added-on ports for USB boot.  I don't know if OS10 has the drivers for booting from a USB3 controller.  Sounds like you already have your W10 Pro 64 up and running.

I received my Z600 3 days ago and I am very, very satisfied.

Only thing to do is purchase USB3 and USB2 cards and later upgrade GPU to either GTX 1060 or RX 480.

I have question for you.

but i was curious do you live in GB or els where in EU, and did pay any Customs Services & Taxes?

To ship over the pc?

Sorry for my English. 🙂

On the label on the motherboard i can read:

You mean that? I am new with this workstation and I am lost with its upgrade possibilities.

Again, sorry for my English.

It has been posted over and over in this forum on how to tell the difference..... my favorite way is to simply look at the "boot block date" in BIOS.... there are two and the newer one means you have a version 2.  Look those two dates up in this forum via the search box above to the left.

A very good alternative is to look at the Spare part number on the motherboard label.... you see it there, and yours is the lower number rather than the higher number given by the other poster.  Then, if you google Z600 spare parts you'll see those spare part numbers up towards the top, and the higher number starting with 5 means it is a version 2.  Your lower SP number starting with 4 means you have version 1.  The Assembly part number is not what you want to be looking at... that starts with AS.

Here is the difference between the version 1 and the version 2 Z600 motherboards.  Red letters are my edits:

If I can not upgrade to X56, what would be the processor and maximum memory? 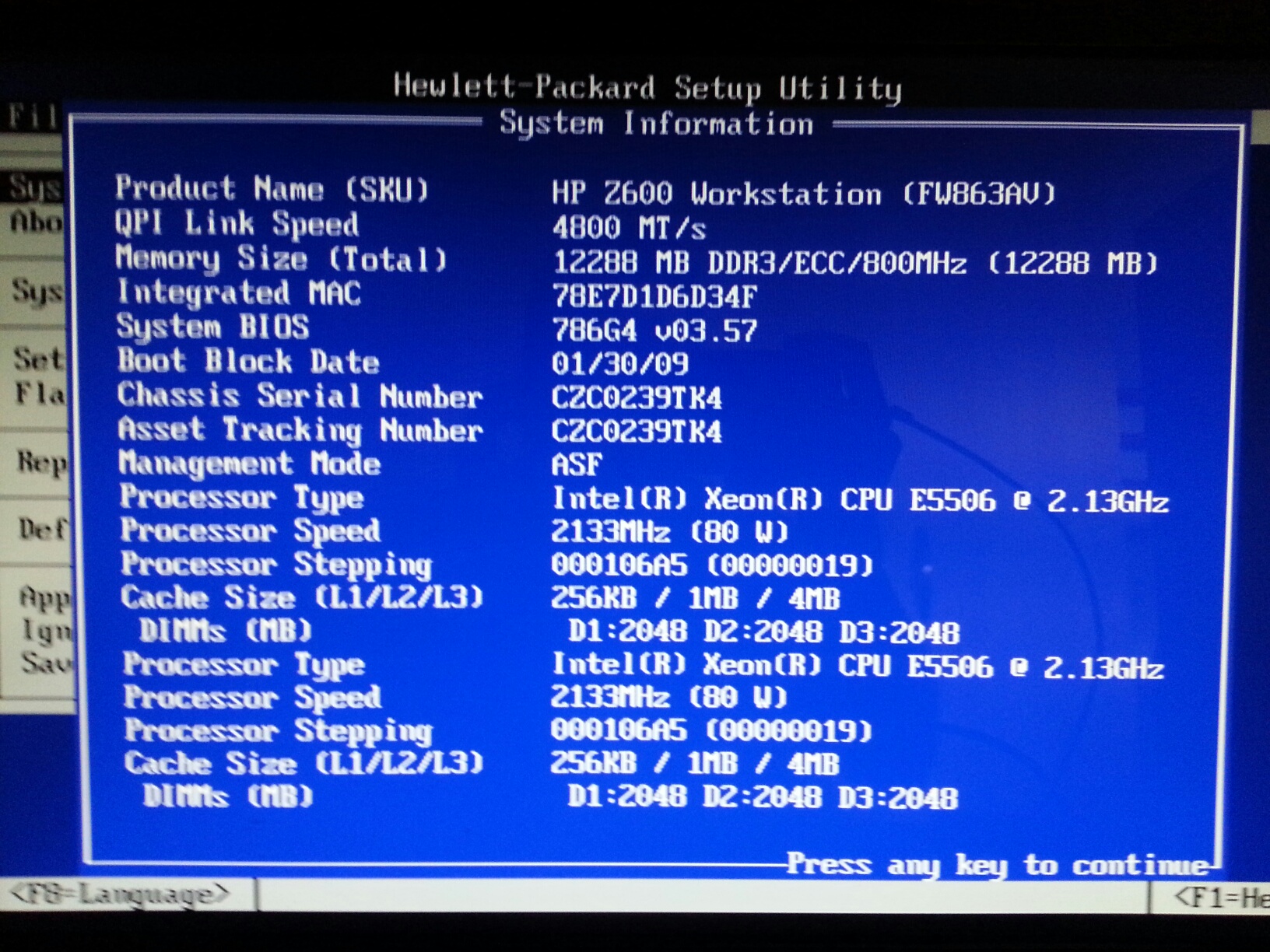 BEST BUILD FOR THOSE WITH Z600 VERSION 1 OLDER MOTHERBOARDS:

Below is HP information on the Z600 version 1 processors, from that 4/13/09 QuickSpec.... you won't be able to see this until a moderator releases it:

From your attached BIOS first tab image what you have, and what you want:

2.  12GB Memory at 800MHz is what your memory is running at... it can do much better but is being held back by your slow processors.      Your Z600 v1 should officially only run unbuffered ECC memory, with a variable memory speed of 800 or 1066 or 1333 MHz (depending on the processor present).   HP generally installed memory that was rated to run as fast as the fastest possible processor for that workstation could run, even if the installed processor could not go that fast.  In your case the memory controller has down-regulated the memory performance to match your slow processors.  When you upgrade to the fastest (1333MHz FSB equivalent) processors then your current memory will automatically run that fast too.

It is important to have all 6 memory slots filled with identical memory, and the version 1 can only run unbuffered memory (while the version 2 can run both unbuffered and buffered).  Both v1 and v2 motherboards should only be run with ECC memory.  So, ECC unbuffered is what you have already assuming it is from HP for that workstation.  If you only have one processor you can only run 3 sticks, but you have 2 and thus can utilize 6 sticks.

5.  Your processor is E5506 2.13GHz (the only one slower was E5504)...... you want two of the X5570 to max out your processor upgrades.  The X5570 has only a single sSpec code, SLBF3, and search eBay using that.  Your current two "Mainstream" heatsink/fans are rated for up to and including 95W max TDP, so you are set there.  Use Noctua thermal compound, as presented in this forum in the past, very thin application.

6.  You will notice a big jump in performance.  Make sure you also use a SSD as your system/applications drive, and I recommend the Intel 320 series (160GB or 300GB) with a 2TB or less "documents" drive.  HP recommends using SATA type II drives on these SATA type II workstations unless they are HP brand SATA III drives.  Use the latest Intel "Toolbox" software for that SSD to firmware update, configure, and maintain.

7.  There is a lot of good life left in the version 1 and version 2 Z600 workstations if you choose your upgrades wisely.  Price for one of those recommended processors, new, at introduction was $1386.00 USD.... current estimated price (used) via eBay:  $12.00-15.00 USD including shipping.  So, it is worth doing your upgrade, I'm sure.