Z8 has some bugs!

I am using Z8 Workstation!

As soon as I started using Z8 to simulate ANSYS, I knew this works had some problems!

1. CPU temperature is so high! over 95 celsius!

I bought that 1 month ago, until now rebooting is over 10 times!

I think Z8 has some inherent defects!

As the Z8 is a tested/approved system for ANSYS, ANSYS has thorough support,  and the system in question is only one month old and under warranty, I suggest that contacting both ANSYS and HP Support is in order.  ANSYS has a Platform Support site:

And that site lists the Z6 and Z8 plus acceptable GPU's and etc. I'm surpised actually that the level of hardware approved is in some cases quite modest, but these recommendations are not scalar to ANSYS potential immense compute requirements.   If a user is imputing a CATIA model to run dynamic stress analysis on a Boeing 787, the system will require more than Quadro K620.  ANSYS also has an internal benchamrk that can evaluate a system for use:

Consider running these benchmarks to see if the system is performing properly, if the fault is component underspecification for the projects, or the project setup needs consideration.

At first glance, the fault appears to be thermal- the system is overheating and shutting down to protect the components, particularly the CPU, from damage. ANSYS is amazingly capable as it can simulate anything mechanical, fluidic, structural, or electronic. Possibly, the simulation has delimited parameters or very high resolution requirements that are overwhelmingly the system.

On what kind of simulations are you working?

I am using ANSYS to simulate CFD and Structure!

But rebooting does not happen while I use ANSYS!

I think Z8 has some critical bugs in combination with Xeon 6154 CPUS, 1.5TB RAM, NVme SSD!

More serious problem is HP does not have the capability to solve this problem!

This is a mystery and difficult to understand as there are no apparent error messages as a guide to the problem. I've not heard of any problems with the Xeon scalable processors in this way, but they are quite recent.

The Xeon 6154 is rated as a 200W processor, rated to 82C so the 95C reading suggests a cooling problem.  Plus, as this system has two of those plus the maximum RAM (768GB for each CPU), a  thermal  shutdown is logical.  The 6154 is on a large die- 3647 so the large area should disappate heat well. HP would not deliver a system without adequate cooling but if only to eliminate it as possibility, consider installing HWMonitor and keep it on top while working.  It would be interested to know what the temperatures are like if there is a particularly hot core. Does that system have liquid cooling? > It should!

I am in the process of adding an external cooler to a z620 which is overclocked: an Alphacool Eiswand 360 which has a 360mm Radiator, two pumps and 6 fans and that system has only a single 8-core @ 130W.

Error messages would be most helpful. It may be possible to collect error messages by disabling the automatic restart:

Follow these steps to disable the Automatically restart option:

What changes have been made to the system since delivery?  My thought, again to eliminate it a possibility is driver conflict, so it would be interesting to know what the GPU(s) are.  There can be problem is for example the display GPU, for example could be Pascal P6000 but the the compute co-processor is a different series such as Quadro Turing or an older Tesla.  Also, if there is a digitizer tablet, or other peripheral.

Certainly CFD has to be one of the most demanding simulation categories, but the system seems to have an excellent specification- the very top standard for that application.

You mention that HP can not solve the problem. I should think that HP provides rapid on-site technical support for a sytem at this level and if they haven't visited, it may be worth starting that process so as to avoid lost work time.

That is an odd one!  I hope others will comment as well.

I did not make any changes in my Z8.

My Z8 is in a genuine condition.

Your suggestion is a good idea but  I accessed Z8 using Google remote desktop when I stay in remote area.

If in weekend I had a ble scrreen, I cannot use Z8 during weekend!

My Z8 is in a original condition and just bought it in a month ago.

HP just took my log data in 2 weeks ago

Has HP ever commented on the very high CPU temperatures? The 95C remains the only distinct condition mentioned that is linked to shutdowns. The fact that the fans are noisy AND still 95C seems to indicate inadequate cooling.

The Z8 was designed so as to run on air cooling-there is no liquid cooling option, but  I am not convinced that this configuration:

Does actually result in this airflow:

> and that the processor at the back is having equal airflow to the front CPU.  There has to be terrible turbulence blowing air  directly at a flat surface- it will not smoothly flow at an angle through a slot of an area much smaller than the intake.  Where is the exhaust from the front CPU going? It seems there is too much probability of the exhaust from the front CPU adding heat to the rear one. Overall, the shroud design appears to me would create a convoluted and restrictive airflow.

It would be interesting to note variation in temperatures between the two pcocessors. The system board has a beautiful, symmetrical layout visually, but I don't believe the airflow finds it as attractive.

I must be missing something as the aerodynamics look terrible to me. I'd like to see this diagram in a 3D model. Perhaps somewhere there is a fluid/particle flow simulation application that can model that kind of thing.

When I simulate something in 100% CPU Loading condition, Temperature diffrence between CPU0 and CPU1 is small.

I got the specification the maximum temperature of XEON gold 6154 is 82 ℃ from Intel & HP information support!

(I suppose Z8 is smaller than old models, so its capability of cooling is reduced!)

I think the cpu may have some problems!

Because HP did not test this cpu model's compatiblity, HP did not find that CPU has some problems.

This is a user-to-user but to get direct support from HP try this: https://support.hp.com/contact/desktops

Given that HP offers the Xeon 6154 as an option, it is certain that the 6154 was fully tested prior to sale. It would probably be a unique siuation to provide a product in which the full performance of a $3.500 processor was not available.

Looking at a few reviews of the 6154, there was no mention of high temperatures, but given that both CPU's are within 1 C, there is not an obvious fault in the individual processor. The 6154 does have unusual specifications as it is an 18-core with a Turbo speed of 3.7GHz and a pair of them in one review  uses 411W.

> The confusing issue that remains is the events triggering the reboots. The 95C would seem to be the cause but what are the circumstances at which the processors are reaching those temperatures if not running ANSYS?

Are any tasks  assigned to the Z8 unprecedented in your use?  It is possible to overwhelm a system with an extremely complex task with scale, precision, and resolution settings.  My local linear accelerator modelled the 18m supercooled accelerator modules to .001mm on Dell Precision T3500's! but the experiment simulations are run on 11 paralleled dual Xeon systems each having 4 Tesla co-processors.

The specification of this system is probably about the highest possible for a desktop and the frustration with HP is understandable, so the problem is to learn what event triggers the reboots.

PS:  In case- no pun intended- the airflow is inadequate, here's a 5-minute idea to improve the Z8 cooling air flow: 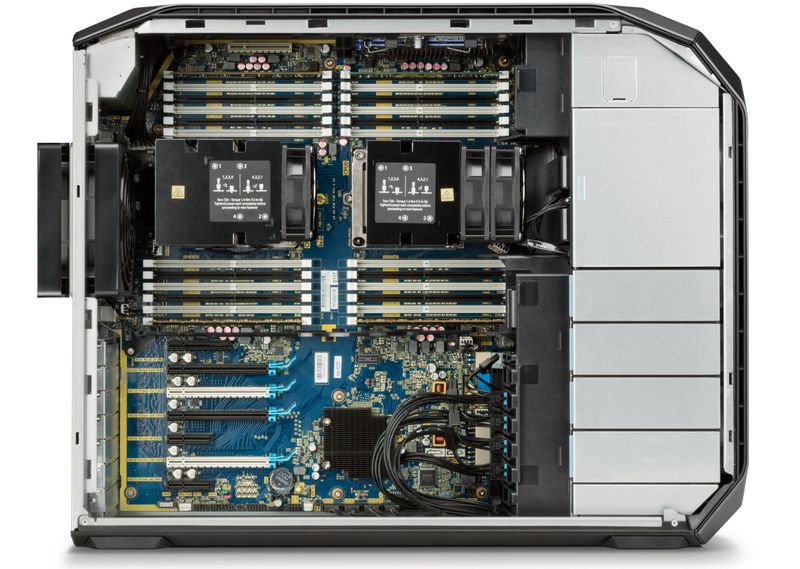 Each processor has an additional push fan and the case adds an exterior pull fan.  However, this would involve modification of the shroud to CPU 0 and would probably upset the warranty,..

Here are some ideas for an exterior liquid cooling unit intended for the office z620:

The enclosure is fabricated to match the z620:

A Thermaltake Core P100 was considered, using a 420mm radiator having 2X 140mm push and 3X 140mm pull fans, plus a variety of fabricated pedestal units of more reasonable size:

In the end, the time, effort, and cost to fabricate a unit was thought to have a low cost/benefit and a few days, the system will acquire an Alphacool Eiswand 360, which has a 360mm radiator, two pumps and 2X 3X 120mm fans at a fixed RPM to lessen noise:

This is much simpler project and similar to the other external cooling ideas, the cooler is not contributing to heat inside the case.  The fluid tubes pass through a special PCIe slot fitting and it's powered off the 4-pin Molex, so the only modification to the system is to add the waterblock to the CPU.

Thank you your advice!

My Z8's serious problem is 2 types.

First is  High CPU temperature of over 95 c.

Random rebooting does dont depend on using ANSYS or CPU full loading.

I think random rebooting depends on other reasons than over temperature.

HP is evading its responsibility about this problem,
if I install this cooling system, HP will not supply any more A/S to me!

I think Xeon 6154 and 1.5TB RAM has some problem in hardware combination(or mainboard?)