I really need help on this, basically HP has decided I can't repair or replace any of my units due to it costing HP to much(according to my case manager) I'm calling bull on what he stated as he hasn't been true to his word(for instance he promised me a year and a half of warranty, never received, received a different unit than i agreed upon in email). Due to all of this I decided to make a video(Link:https://www.youtube.com/watch?v=ulFpixXP3Cw) on this basically sharing my video evidence of all the issues as well as my experience with all 4 of the 'faulty"(Hp's words not mine) units. Basically it has come down to the point to where I have a laptop that overheats running basic things in the OMEN performance mode while the charger is plugged in. my case manager is only giving me a buyback worth $800 which isn't reasonable because A) the laptop was double the amount and is only a year old, laptops only lose 20% within the first year and B) because they have yet to properly repair it once. they can't even apply the right amount of thermal paste, a company that sells all sorts of pcs should know that applying thermal paste to the entire CPU and GPU isn't gonna prevent it from overheating.

Now my question(s) are the following: what solutions do you guys have as I know for a fact the LM won't fix it since my friends omen wasn't repaired when replaced with Liquid Metal? and (question for HP) is my case manager allowed to restrict me from getting repairs or replacements when all 4 laptops are under warranty?

P.S. to anyone that's gonna suggest undervolting, I will decline your suggestion due to the following reasons. when you under-volt you limit the voltage going to the CPU in this case, All computer components need a defined amount of voltage to performance at capacity otherwise your laptop will either free up, lag or just not preform at it's actual capabilities(PlUS HP doesn't consider it a repair but instead consider it a "Work-around"). 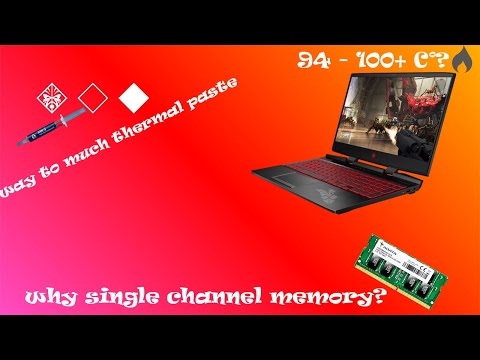 HP Omen overheats not fixable
youtube.com/watch?v=ulFpixXP3Cw
Welcome back to another tech 4 life video, today I'll be giving you my experience with HP omens and the flaws in their design. I hope you'll enjoy the video....
0 Kudos
Tags (3)
View All (3)
2 REPLIES 2

@Tech_4_Life I understand your concern and I have brought your issue to the attention of an appropriate team within HP.

We'll see how it goes,until I get the solution I desire I will not accept this as my solution which is understandable, but based on what I have tried I believe that there's no other option for me they're basically going to pass me back to my previous case manager and the same particular cycle occur where he states the only option is a buyback according to hp.