Both now have the same exact issue. Neither will boot. The screen is blank, (no signal) no beeps, no light codes. After about 30 seconds, the fans run at full speed. This has nothing to do with the OS. It doesn't get that far.

I have tried replacing the CMOS battery, pushing the CMOS reset button and removing the SSD and memory. I cannot get it to post nor can I access the BIOS. I do get the "bad or missing RAM" beep code with the RAM removed when I attempt to boot.

I think it would be too much of a coincidence for both motherboards to crap out at the same time. It seems to be a BIOS issue.

So is there any way to recover?

Welcome back to the forum.

I don't know what is going on.

Never saw two identical systems choke by changing from IDE to AHCI. I could see possible operating system problems but you cannot POST.

Fans running at full speed and no POST usually suggests a motherboard, or MB component, or a power supply problem.

I guess you are only connecting a keyboard, mouse, and monitor. I would even try only a monitor at system startup.

I tried every combo with and without SSD, memory, keyboard/mouse and monitor. I have two power supplies so I don't think both went bad at the same time.

This is so weird. I can't believe both motherboards went out at the same time. It has to have something to do with changing the BIOS settings but removing the battery and using the CMOS reset button didn't help. I even tried a new battery. I left the battery out and held the power button in for several minutes too.

I don't know what else to try. I'd chuck them in the trash if it were not for the time I spent making them look like new and installing/updating Window. 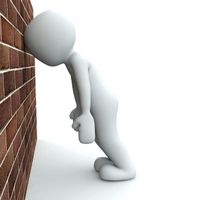 I have no idea what has happened in your scenario.

I usually recommend letting the PC sit for at least 15 minutes when resetting CMOS by removing the CR2032 MB battery.

Very strange to see two identical systems crap out like this.

I bought a used MB from eBay for $15 and that fixed one of them.

I'm guessing editing & saving the BIOS settings on the original boards must have pushed them over the edge. Maybe it killed the CMOS???

It just seems so unlikely that both units would suffer from hardware failure, at the same time, right after changing a couple of BIOS settings. Seems more like a logic issue rather than hardware but I guess anything can happen.