I updated the BIOS on a HP Envy 23-o014. The original BIOS version was 80.01. The new BIOS version is 80.10. The update process was not inturrupted and when it completed I clicked continue to reboot the computer. However, when the computer rebooted it hung at the initial screen with the HP logo. Pressing the "ESC" key reveals the Power On Self Test (POST) results including the current BIOS version. It now shows the new BIOS version as being installed but the system will not boot. Pressing escape, F9, or F10 to get into any of the boot or BIOS menus also does not work. The lable for the screen that should appear shows in the lower right corner of the screen but the selection window does not appear. This is now the only result each time the system is powered on.

In an attempt to reload the BIOS update I have created a BIOS update USB flash drive using the BIOS update utility from HP for this model computer. Following the HP instructions by inserting the prepared USB flash drive and holding the Windows + B keys while powering on the computer results in the expected 8 beeps but a screen showing the BIOS being flashed never appears. I have tried this at least 20 times even using different USB drives in case the system had an issue with a certain brand or capacity drive. This has also been tried with the hard drive both installed and removed. This has been attempted with both the HP wireless keyboard that was bundled with the system as well as a wired USB keyboard. I have tried reflashing the same new BIOS version (80.10) as well as two previous versions in case there is some issue with this latest firmware. However, even after trying to flash a previous version the POST always shows the BIOS version to be 80.10.

I have also tried removing the BIOS battery, even leaving it our for a number of days, in an attempt to reset the BIOS. However, the results are the same. I have looked for a BIOS reset jumper on this system board as well as in documentation but I don't see any reference to this model having a jumper for that purpose.

At this point I am officially stuck. I can't seem to reflash the BIOS or to interact with it in any way. A couple of pictures are attached. The picture of the POST shows the system is calling for the "Startup Menu" in response to pressing the ESC key but that menu never appears.  Your suggestions are appreciated.

I see that you tagged your post with "CMOS". Why did you add the CMOS tag? You must have had a reason for doing so. Perhaps you forget to try clearing the CMOS but entered the tag anyway.

Starting tapping F2 after power on and see it you can get the diagnostics menu to appear.

Thank you for your suggestions. During my original attempts the only thing plugged into the computer was the keyboard. When I started using the wired keyboard I even removed the USB receiver behind the access panel on the back for the HP wireless keyboard/mouse.

I added the CMOS tag since some tend to use BIOS and CMOS interchangeably. I figured the tags were used for searching the forums.

Pressing F2 at power on shows a very similar POST screen as the one pictured except in the lower right corner the lable "Diagnostics" appears since F2 is supposed to start diagnostics. However, the diagnostics panel never appears.

BIOS and CMOS and not the same.  CMOS are semi-static parameter changes to the BIOS and they can be cleared.  The BIOS can't be cleared/changed except by a reflash.

Clear the CMOS and remove the boot device and again try the F2 after power on.

The hard drive and all USB flash drives are removed. Pressing F2 at power on still only results in the "Diagnostics" label appearing in the lower right corner but the diagnostics panel never appears.

As previously mentioned, I removed the battery that provides power to retain the BIOS settings and I cannot locate a jumper to clear the CMOS. Since none of the BIOS related menus will appear I am not able to set the BIOS to defaults from within the firmware. That being the case can you tell me how to "clear the CMOS"?

You seem to be a little confused about the difference between CMOS and BIOS. That is not uncommon.  For now, just put that aside.

You might have a bad CMOS battery but it's rare with new PCs.

What happens if you press DELETE as soon as you power-on the computer?

Does it enter BIOS SETUP?

As for the "clear CMOS" jumper, I looked at:

Three different versions of the same document, but it's all annotated pictures, with no "legend" to identify each port/connector.  Sigh.

See: a fuzzy picture of the Layla (Derek & the Dominos????) motherboard,

but there is a ribbon-cable covering part of the motherboard,

and there is something black (a plastic insulator) covering a section.

I did not see any legible labelling for any "reset CMOS" jumpers -- too fuzzy.

Thanks for joining in. Pressing Delete does not seem to have any special function on this BIOS, at least not in its current state. Pressing the delete key from power on clears the HP logo display and reveals the POST results but no label appears in the lower right corner of the screen indicating that the key should have resulted in a response as it does when pressing ESC, F2, F9, or F10.

Thank you for posting links to those references in this thread. Good information about this system but like you I was unable to find any reference to a "Clear CMOS" jumper.

Below is a picture of the section of the motherboard under the access panel at the bottom back of the unit. Circled in red are the only 2 areas where I see any jumpers anywhere on the motherboard. However, these jumpers do not seem to be identified on the board itself. I've read on other forums that some HP computers have a ROM Recovery set of pins. I don't know if that is what the set of 8 pins is in the lower left of the picture or if they are for some other purpose. I pulled back the black plastic film that is around those pins but I still didn't see anything printed on the board to help identify their purpose. 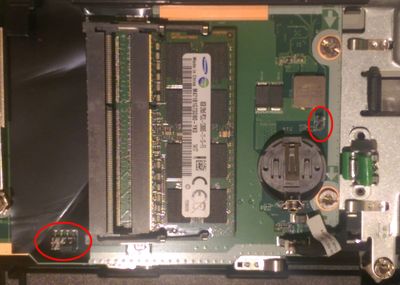 I found at least one post in a forum where the person said they had difficulty flashing the BIOS and they found that removing the 8 GB memory module and replacing it with a 2 GB module allowed the "Win + B" BIOS recovery process to work every time. I tried that as well but it did not help on this particular system.

You didn't mention checking the CMOS battery when it was removed.  Use a VOM and it should read near 3.3+ volts (new battery voltage).

Of course you reinserted the CMOS correctly, right?

> You didn't mention checking the CMOS battery when it was removed.

Also, set your multi-meter to '10 Amperes', and check the output.

I've seen too many (non-computer) batteries that can still put out the specified voltage (because that's what each chemical reaction creates) but can only put out less than 10% of the original amperage (not enough simultaneous chemical reactions).  If so, it's time to either recharge the battery (NiMh or NiCd) or responsibly recycle it (alkaline).

I learned about the above on an episode of Professor Proton, played by Arthur Jeffries.