what to do if you have two monitors with HDMI input, but you have a graphics card with only 1 HDMI and at least one displayport ..
Identify the ports to use, they are quite similar. 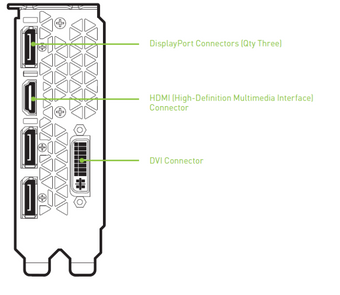 You can not therefore connect your  second HDMi screen directly to the displayport, you just need to use an adapter.
This is just an example, but it works fine with this one, if you already have the HDMi cable:

This adapter must not be able to work in the other direction, an hdmi card towards the screen in displayport

Computer off, monitors off, we simply connect the two screens in the corresponding ports of the graphics card

the first in HDMI, and the second with the adapter on the displayport
Then we turn on the screens, then the computer
Both screens must work directly, you can configure them as desired!
You just have to open the display settings (right click on the windows desktop)

you can change the order of the screens here, it's simple:

This may be useful depending on the location of your monitor.
You can then choose the function, for example
duplicate the displays, we have exactly the same two, the least used function I think
or extend these displays, you can watch a video on one screen, and open a web page for example on the other
Just simply move the windows

on the right main screen (blue ), I move to screen two, gray area

Finally select a wallpaper for each, I find that it is not well identifiable under Windows 10
Open the customize option (always with a right click on the desktop)
Simply choose the desired image and assign it to the screen: