I have a HP Pavilion All-in-One - 27-a227c.  The touchscreen and one of the USB ports stopped working.  I tried reinstalling drivers and the problem persists.  So, I decided to clone the hard drive and try a factory reset.

I created a HP USB recovery media from the cloned drive.  The restoration went smoothly until the "long" install process reached approximately 2/3 of the overall installation of software.  At this point I received a failure message.  The options were to "View Details" or "Retry".  If I select Retry, the process fails again.

I have tried the restoration process both from the hard drive and the USB drive.  Both fail.

You could have a hardware problem. I would check hardware by doing the following:

You could also, since data loss is not a problem or you have backed up data, try a clean W10 installation.

W10 installation media can be created at this site (Link).

While I was waiting for a response last night, I did perform a system check on the SSD and the HDD.  Both returned a clean bill of health.  I then performed a "clean" W10 install from a freshly created USB media.  This was successful, but the monitor only installs as a Microsoft Generic monitor when viewed in Device Manager.  I doubt that there are any hardware failures causing the Recovery process not to work since the PC was very stable and fast with no other issues besides the touch screen not working.

HP's support page describing the hardware specifics for the computer based on serial number shows that it was built and configured as a touchscreen.  Before attempting the recovery process I attempted to download and install the touchscreen file from the HP Support Page's Files and Drivers page.  It fails during the installation.  I get an error that the file is only for an Ilitek screen.  There is no other touchscreen driver I can find on that page.

The touchscreen "used to" work.  There is a similar PC in the house built without the m.2 drive.  I noticed that on the other PC, that in Device Manager, under HID devices, there is a MS Generic Touchscreen Driver loaded.  I can't find where, in the MS Update Catalog this driver exists so I can try and download it and install it.  Since the other PC has a slightly different "configuration build" I am assuming that Recovery media created on that PC will not work on the PC which has the non-functioning touchscreen.

When I performed the "clean" installation of MS W10, the installation performed correctly, but the OS takes up about 32GB of the 128GB SSD (even after running Disk Clean from the Drive Properties), and the touchscreen still does not work.  In addition, there are 2 "unknown" USB devices (even though I only have the power cord connected.  I installed the HP Advisor software and checked for missing drivers.  No missing drivers were identified.  At this point I don't know which driver(s) are missing and if this is related to the touchscreen not working.

I do know from past experience, that in less than 2 years that the m.2 SSD will fill up with old updates, temp files, etc if a standard W10 load is performed on a 128GB SSD.  I know I can force relocate user folders and files to the 1TB drive, but I'm pretty sure this is not the way this system was designed to be recovered or used.  I have also seen other assorted issues in the "long haul" using the redirect method of moving User and Program folders to another drive.

I suspect that the Recovery USB drive created in the HP W10 may be corrupt, even though it was created without error.

Does the HP W10 installation somehow keep only the "core" of W10 on that tiny m.2 128GB SSD and split the other files off onto the 1TB HDD, or does it install the OS onto the 1TB HDD and use the SSD used as a type of auxiliary memory (like Optane memory) designed to simply speed up the computer?  The BIOS for this AIO PC is woefully inadequate, and I find nothing there Storage related to configure any of the Storage Drives as anything other than a regular storage device.

Since the recovery for my model PC is not available for download using the W10 app for Cloud Recovery, if I bite the bullet and order recovery media from HP, will this recover the PC correctly back to factory defaults as it worked when it was originally unboxed as new?

I agree you probably have corruption on both the HP Recovery partition and the USB HP Recovery media you created if all hardware is good.

The HP Recovery media purchase option at the HP download site should restore the PC to factory settings.

The question is why did your PC lose some functions such as touch screen and USB; did you update to the latest version of W10?

I don't see an Optane option for your PC. Optane configurations usually include a 16 GB or 32 GB Optane NVME SSD and a platter HDD. I would think the OS is installed on the 128 GB SSD.

You could become trapped in a never ending upgrade loop and the ensuing repetitive driver issues if HP is not providing drivers capable of running newer versions of W10 and Microsoft drivers cannot fill the void.

Again, I don't know if a driver problem is the cause of your problem. Very tough to diagnose the issue in a forum.

I was finally able to speak to someone in HP support even though this PC is out of warranty.  They sent me a recovery media flash drive.  Unfortunately, I still get a failure message when trying to run the recovery.  This error message is different from the error I was originally getting (See the "failure message" pic I attached.)  This error happens when the recovery process is at about 30%.

I don't know where the "Brand name" is supposed to reside for the recovery software validation step.  I posted a picture of the System information screen.  You can see that this is indeed a 27-a227c model, and the serial number is correct.

Could this be a result of them accidentally sending me the incorrect recovery media?  Since the PC is out of warranty, I don't have a phone number I can call to troubleshoot this issue.  Now, when I visit the support page for this PC and begin the steps to order recovery media (just so I can see the correct P/N), I hit a brick wall stating that the maximum number of recovery media for this PC has already been ordered, and I can't proceed.

I have a support representative who is supposed to call me in 2 more days as a followup, but I am hoping to have this resolved before he calls again. 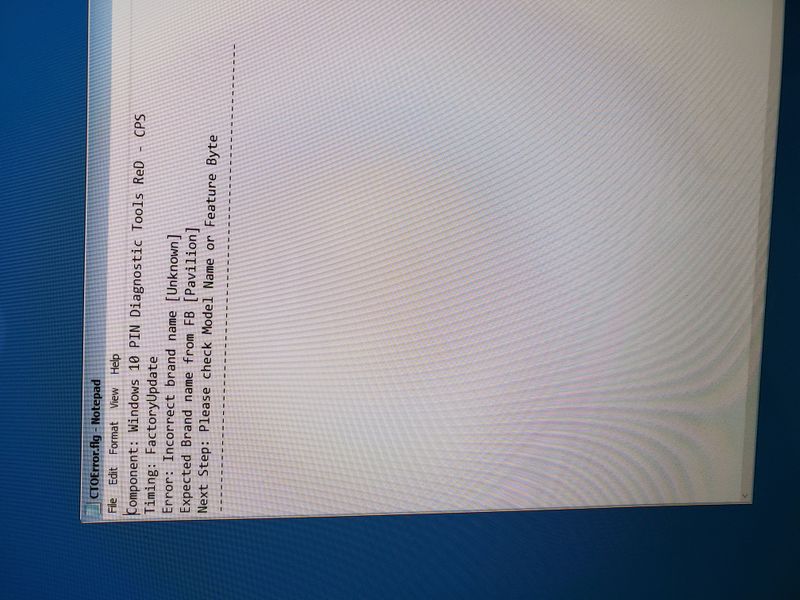 HP sent me yet another recovery USB drive.  It has the same failure.  After that, I ordered a new system board.  I still get the same failure.  I suspect that the recovery media, created by HP, can't properly read either the feature name or the brand ID.  I'm getting ready to put the original system board back in the computer and send it in for HP to fix it.