I had recently used the Card Reader on my HP PC to format and write data to 64gb MicroSD card in an adapter.

I have NOT installed anything on this PC, since I formatted the SD card last, and I can format the SD card on other PCs with or without the adapter, so I know its not the SD card or adapter, I also tried other new MicroSD cards and get the same issue.

When I check my Devices on my PC, it reports that a Universal Serial Bus Controller has the "yellow" exclamation mark next to it under Mass Storage Device, when I examine the item in question using properties it reports "This device cannot start. (Code 10), {Operation Failed}, The requested operation was unsuccessful."

Strangely I can insert a SD card into the PC, using the adapter and it detects it fine, it even allows me to open the card and read from it, but if I try and write something to it (even the new SD cards) it fails with Write Lock, but the Write Lock is off on all the cards and adapters and I have tried loads of adapters - All the SD cards format fine with or without the adapters on other PCs,

I have removed the device under the Device Manager and scanned the hardware so it adds it back, but it just adds again with the same Yellow Exclamation mark and wont load.

To test it further I also have a USB External SD and Memory Card device which supports all the SD card formats, and if I plug the card in that, then plug that into the one of the USB Socket it all works fine.

I am unsure how to sort out the driver for the "Mass Storage Device" error, as I do not know how to reinstall the relevant driver for this as its protected in the operating system. Trying to run SFC /scannow and also DISM /Repair Image fails to resolve it too.

Additionally my HP Support app fails to load which I know is a separate issue, but has worked previously, uninstalling this and installing again makes no difference.

My real problem the Mass Storage Device driver under USB devices, and I have scanned the internet trying to find out how to fix this and it fails. ALL other USB devices are working fine.

Hello
The device could be damaged!
You haven't changed anything, but it is also possible that an update is the cause of your problem
To start, just try the driver here, if it is not already done:

Thanks for that, however this has not sorted it, so its still reporting the same problem after a reboot.
Its something to do with USBSTOR, since this is the Mass Storage Device that is showing up on the Device Manager in the System Properties.

It is true there have been a few Windows Updates, but I am unsure of the time line over when I used it, the updates and its current situation now.

give screenshots of device manager
Where you can see the error messages, and the card reader driver

Card reader is listed, but cannot format or write to the SD card. 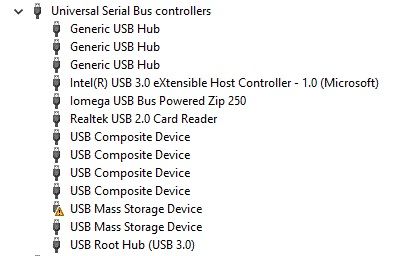 it may have nothing to do with it
but tried different updates except bios
Chipset, Intel RST driver
perform a full check:

Had a support agent chat, he wasnt much help..

1. Run Hardware Diags - Did that no errors.

I am running the Web Tests, but the problem is, it tests the basic PC functions, but I dont expect it to be testing the physical devices (i.e. Card Reader itself)

Chipset Intel RST - Not supported on this device.

Will do more checks over the weekend, I have visitors round soon.. but it is strange the Write/Format is failing, but you can open the card SD card and browse files and read files fine, its almost like there is a problem with the contacts in the physical card reader itself that enables writing etc.

Also I can take the SD adapter and even the MicroSD card and use solo or both together on another PC and its fine.

2. Backup Data and reinstall Windows.
is this done, or is what has been proposed, but not yet done?

This is what was "suggested" but NOT yet done

Sadly I seem to be doing this more and more on this PC despite its under another 12 months warranty.

I have I think reinstalled Windows on this PC about 2 times since I have had it, and it is always something hardware related in some manner that caused the whole PC to get in a mess, and I had to start again to get it back to normal (only recently too!)

I am certainly not going to reinstall Windows at present because of an issue with the card reader/mass storage device until I have done more research and troubleshooting, the amount of hassle to back it up, reinstall it and then put it back is painful especially when at present I do not know if its Windows related or actually hardware related!

I had a small USB card read which has 3 x USB ports, and 1 MicroSD and one full SD card slot delivered from Amazon this afternoon/early evening. I plugged into the HP PC USB port in the front,  plugged in the same MicroSD card in the same adapter that was giving me the errors and it worked 100%, i.e format, read, write and delete.

So its clearly its a driver related issue (or hardware) for the inbuilt SD card reader, as it was working perfectly last week and has not been used since - I just came back today to use it and found the problem and the PC has been on all the time and not had any updates.

All I need is some support agent to assist me, but the person who chatted to me was more of the Reinstall Windows rather than "it could be hardware related and its under warranty" or "let me do a support connection and try and resolve for you before you reinstall windows."