I have purchased this desktop this week, and it arrived yesterday. Yesterday evening the problem occurred for the first time (first day) and it just happened again.

The problem is as follows. The desktop is connected with an ethernet cable, which works and the internet is okay. That was until, seemingly random, my internet wasn't working anymore.

However, I was still connected to the internet. At first I thought there was something with my ISP, however, I quickly noticed my wifi still worked on my cellphone. This made me think : let's connect the desktop with wifi. Again, it connects... but it gives no internet. Weird as that is, I figured: I'll create a mobile hotspot with my cellphone and connect it through that. Again, it connects, but gives no internet.

Restarting the computer solved the issue, I immediately had internet again. I figured it might have been random and only once. However, on the second day i have this computer (today) it happened again. It is incredibly frustrating to have to restart the computer to solve the issue. Especially when gaming, the internet falling out is incredibly annoying.

In energy settings, this was ticked on. 'the computer is allowed to shut this device off to save energy'. It is an odd setting for a desktop network card, so I have ticked it off right now. I'm not sure if this will solve the problem. 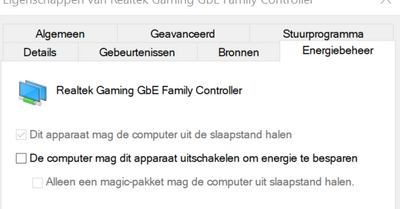 Does anyone have a suggestion what might be the problem (& solution)?

Request you to follow the below troubleshooting steps from the document:-Internet randomly stops working