On Friday, I updated my Envy 20 to Windows 10. Once the update was finished my computer started up fine, however, my antivirus software (AVG) said there was an update and I needed to restart. I did so and after the restart and HP logo screen I had a black, bu luminescent screen. After a maybe ten minutes of the screen staying like this, I held the power button down to turn the computer off and then restarted it with no problems. I turned it off Friday night normally and it ran normally all day Saturday. This morning (Sunday) when I turned the computer on the power light came on and I could hear the fans turn on, but the screen remained black. Just black, not even a luminescent black like when I did the antivirus restart. I tried a hard restart like before but nothing changed. I left the computer on like that for around an hour and nothing changed. Figuring it was maybe a heat issue, I opened up the case and dusted the fan and the heat sink but the problem remains. Any ideas on what's next? 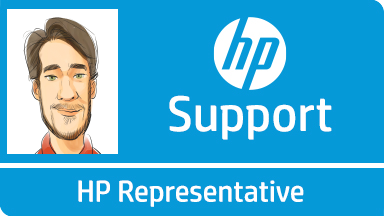 I have read your post on how your desktop computer boots to a blank screen when it is first powered on, and I would be happy to assist you in this matter!

To restore the display of your desktop, I recommend following this document on Screen is Blank after Starting the Computer. This should help to successfully boot into Windows.

If the issue continues, please contact our technical support for further assistance in this matter by clicking the link below to get the support number for your region.

Click the “Kudos, Thumbs Up" on the right to say “Thanks” for helping!
Was this reply helpful? Yes No

Shortly after a Windows 10 patch was installed (around mid October 2015) is when the blank screen issue had begun.

seems to be referencing a null page or article that doesnt exist.

gave the folliwing article for help

which has great basic troubleshooting steps for a typical desktop windows pc however this particular model is an all-in-one touch screen type (where the desktop components are actually built directly into the monitor, which itself is a touchscreen).

It would be greatly appreciated for some, more, help with this issue (the computer powers up with only the power button light on white, fans start, and hard drive spins and can be heard being accessed occasionally, there is simply no sign of life from the monitor whatsoever. Also, regardless of which USB port I plug a keyboard into, none of its lights will illuminate (ie num-lock), not even a brief flash during initial power on that can be typically seen when posting).

Thank you.
Was this reply helpful? Yes No

Did you get this issue resolved?

I tried everything...but finally got into bios after a month of advanced troubleshooting.

Let me know if you still need help.

HP Recommended
Hello Misfire, thanks for your willingness to lend a hand it's much appreciated.

Unfortunately I have not yet resolved this issue and would love some help!

Thanks, I look forward to hearing from ya!
Was this reply helpful? Yes No

HP Recommended
Hello all. Hopefully someone is still viewing this thread. Misfire and Transcend - I'm interesting to know about your resolution of this issue. Misfire - it would be great to hear how you got to your BIOS.

If you see this, could you please help me out? My problem exactly matches what Transcend describes.

Thank you in advance!
Was this reply helpful? Yes No

I have the same issue. (Keyboard LED do not light up)
and the system at times will reboot for no reason.

Has any one resolve this issue since it has been filed?

I've got the same issue, mine is the envy 20-d003la, 2 weeks ago for some reason it worked normally, but after a reboot got the blank screen again. Reading the other topics its clear that the problem arose after the Win 10 update, i doubt its a motherboard problem seeing that my envy worked perfectly fine for two whole days 2 weeks ago.
Misfire can you tell us how do you got into the bios?

I have exactly the same problem, and have tried to follow all of HP's suggestions/links/videos with no success.  It seems there is no help to be had with All in one PC's.  Really disappointed with HP, as my computer is only 2 years old. It seems that the common denominator is the Windows 10 upgrade.  I wish I'd never updated.  Not happy.

I had the same problem a few weeks ago. Now I am happy that my HP ENVY 20 TouchSmart All-In-One computer was fixed and is running flawlessly. If you like, you may wish to contact Computer Handyman George at hikarikenkyuujo@gmail.com. In your e-mail, please state the make, model name, model number, product number and the symptoms of your computer for a non-obligation consultation.

Similarly, if you would like to recycle your computer, you may wish to contact Computer Handyman George too.

Hope that you will get your computer up and running again!