I could also stay on the safe side and buy the Z Turbo Drive wich is officially supported but the Samsung SM 951 is a lot cheaper and faster!

The SM951 comes in two tastes, AHCI and NVMe. What would the best choice be for a smooth operation in the z820?

Is there any gain in performence by installing Windows 8.1 or 10 instead of 7?

you confirmed in this thread that you both succesfully installed the Intel 750 NVMe ssd. Does it still work properly and fast?

if you use the pc as a professional tool then maybe I'd play it safe and go AHCI.

I'm using mine to train CAD but don't use it for any production work so my risk is limited.

I couldn't tell whether there's actually a big difference to a conventional drive. benchmark are

updated to latest firmware due to some performance degradation in the former PC). 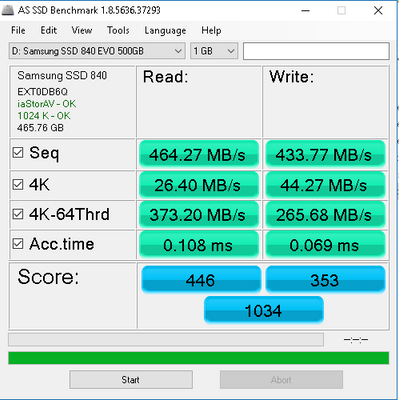 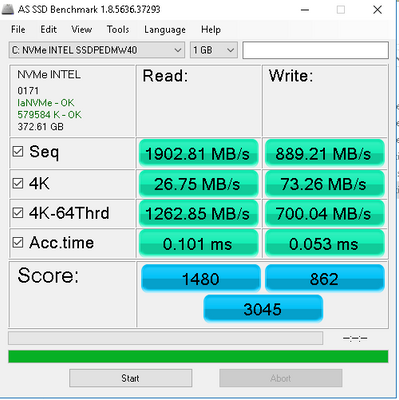 Thank you for your quick reply! Though it is a little dissapointing... haha! I mean that the whole thing with a traditional SATA ssd is the bottleneck of 600 MB/s, isn't it? While a NVMe ssd in a PCI-e 3.0 x4 slot has far less latency and much higher throughput. Or am I mistaking here?

Anyway, maybe I'm doing something wrong but I cannot see the PNG's you added. I only see 2 squares with a triangle inside and when I hoover over them all I can do is read the filenames. Can you think of a way to get that better?

I think a moderator has to approve attached pics for posting so some troll does not load in some jpeg that might hurt our innocent eyes.  I'm fine with that, and my pic posts have never been risque here but I too have the "time out".  Take a look now.... I can see them fine and could not earlier.

Hi SDH, thanks for letting me know.

Looking at the 2 benchmarks MrBike posted I see that the Intel performs a lot better than the traditional ssd from Samsung. Therefor I will continue my search for a fast PCI-e ssd.  Benchmarks show that the Samsung SM951 and 950 Pro are a lot faster than the Z Turbo Drive (first edition) and a lot cheaper. They both can be installed with the help of an adapter card, (Addonics ADM2PX4). The question now is; AHCI or NVMe?

What would be the best choice for a HP Z820?

were you able to get this working with Windows 10?

Since the z820 supports the ahci controller over the pci-e, you should have better luck with it if you want to boot from the SSD. Otherwise, having the right drivers in the OS will allow to use either ahci and nvme as data drive

I work for HP. However, all opinions and comments are my own.
0 Kudos

I spent considerable time researching my PCIE NVME SSD to boot on my Z620 so hopefully I can clear up the mis-information posted by folks claiming it cannot boot in NVME as it certainly can, however, only on specific drives. They are correct in stating HP does not support the configuration and will probably not update the BIOS to add the NVME OPROMS necessary to make the zx20 series relevant in this area. This information is from my experience only but I would have liked this posted as it would have saved me time and energy and I hope it helps someone else. That being said here is the high level that worked for me as I am using a PCIE NVME SSD (booted into Windows 10 x64) on a Z620 to type this message.

First, you will need the specific drive capable of being seen by the BIOS. Currently there are only two drives on the market that support the OPROMS needed to boot NVME on the zx20 series. Do not consider the Samsung SM951 NVME (also known as the G2 series) as it will not boot natively. Samsung has an AHCI version of the SM951 that is bootable (not confusing at all) that HP uses in the G1 series should boot without problems. I have not used the AHCI drive but it is supported by HP. I do not think the AHCI version is still available for purchase new anymore, at least as the HP Z Turbo G1 which comes with the nice adapter card and support. This post is for the NVME version as the AHCI does not seem to be an issue for folks but I feel worth mentioning.

Here are the models with the BIOS OPROMS that should boot, I know the 950 pro works and others have had success with Intel's 750 series as they have legacy OPROMS as well. I do not think Intel still sells the 750 series new either so the 950 pro was the only option I perceive to be currently viable if you are interested in purchasing a new drive to boot NVME.

Second, the drive must be formatted GPT and configured for UEFI boot.

BIOS revision should support UEFI version 2.3.1. My BIOS is revision 3.88 and the revision must be one of the newer versions although I am not sure exactly what BIOS revision added this feature. I did not try any previous BIOS revisions so it is possible an older one works but I cannot speak to any other revision and recommend updated to the latest. I had to change around some settings to get the drive to boot properly. The BIOS is incredibly simple so not many options can be changed. The secure boot options are a possible pain point since they can toggle legacy support so be aware of those features.

In addition to the BIOS the OS must have the drivers installed to boot properly. Windows 10 has an NVME driver native that was good enough to boot without custom OS installs for the 950 pro.  I have seen posts claiming thier machine needed it pre-installed others did not. I am not sure if the NVME driver is pushed to Windows 7/8 or not but I would imagine a Windows 7 install would require the NVME driver before it would fully  boot. That would be something to consider in setting up the configuration.

Finally I am not sure about the Z220, Z420 models but the Z620 and Z820 share similar BIOS functionality and should be just fine. My specific rig has dual E5-2643V2 processors. The booting functionality I believe is in the chipset and BIOS so the Sandy Bridge versions should not make a difference. As noted I am currently booting from a Samsung 950 Pro NVME to Windows 10 x64 and once I found all this information the actual setup time was actually really fast.

I can confirm what scarr500 is writing. I managed to install Windows 7 Pro 64 on the Samsung 950 Pro ssd on a HP Z820 and all works well. Benchmarks are a little slower than expected bur overall everything reacts very fast. The 950 Pro is in a PCI-e slot with the help of an adapter card, (http://www.addonics.com/products/adm2nvmpx4.php)

I copied the whole content of the HP Win 7 Pro DVD to a folder on the harddisk of my second pc. I changed some folders and added the bootmgfw.efi file  wich I found in the folder C:\Windows\Boot\EFI on my second pc, (wich has Win 7 Pro). I changed the name from bootmgfw.efi to bootx64.efi and copied it to the right folder of the copied HP Install disk on my second pc. For details, check step 11 on this website; http://www.eightforums.com/tutorials/15458-uefi-bootable-usb-flash-drive-create-windows.html

Than I created a 8 GB bootable USB stick with diskpart as described in option two on the website mentoned above.

I copied the whole content of the (now EFI bootable) install disk from the folder of my second pc to a 8 GB bootable USB stick and added a folder with the Samsung Nvme drivers. Not the .exe driver but the seperated  4 driver files including the .inf file. They can be found here;

Than I booted up the HP Z820 from the USB stick in UEFI mode. With F6 I loaded the Samsing drivers and the 950 Pro SSD was recognized by Windows. I wiped all partititions and made new ones, which will be GPT partitions, automatically made by Windows. Than I proceeded installing Windows.

Disconnect all other drives apart from the 950 Pro before installing. In the BIOS secure boot must be disabled.

Hi dan or other HP technicians!

I am a HP Z230 Tower Workstation user from China! First please forgive my poor English. I am meeting the same issue you menthioned above. I have tried a Z turbo drive G1(Samsung XP941 MZHPU256HCGL-000H1) and Z turbo drive G2 AHCI(Samsung SM951 MZHPV256HDGL-000H1). Both of them could be detected on bios and bootable. Now i am eager to running a G2 256GB or 512GB Nvme version on my mechine. I have found it could not be detected on bios but could be seen in the windows installation steps or made as a secondary disk running in windows.

Here I wanna know how you could help me slove the problem in oder to i can use a Nvme Z turbo drive G2 SSD as a bootablb one for my primary disk. Need i change some configuration or settings for making it bootalbe or will HP give out the solution for this issue?