Hello! I have just received my Reverb G2 and cannot continue because it says the headset is not detected by USB.

I installed a USB-C, 3.2Gen2 PCI-Express 1x card, part number is ORICO PE20-1C.. The driver for the card has (Microsoft) at the end as specified by the Microsoft documentation.  If i connect to the USB 3.0 HUB on my DELL S3220DGF I get an unknown device (Port reset failed). If I connect directly to the native USB-C port I don't have any unrecognized devices but the headset isn't detected. The Windows Mixed reality error is 4-1. If I follow people's recommendations and connect the device to the powered USB hub of my Dell S3220DGF I get  Unknown USB Device (port Reset Failed) device appear in my USB controllers section of Device Manager.

Can anyone figure what's wrong?

I reviewed your post and I understand that the Reverb G2 is not getting detected on the computer.

I recommend you contact support and they will assist you in this regard.

Update: After deleting the "Hololens" device and deleting it from my device manager and checking for hardware changes, I got the HP Reverb Virtual Reality to show up in device manager. However i am getting messages in device status :

This device is working properly.

If i see all event logs for the device, I have a few messages, the latest of which goes as follows:

If i check ASMEDIA events i have this one too:

After doing hours of troubleshooting, I used software to check device VS host USB version check and no matter which controller i connect it to, it always says "usb 3.0 device connected to usb 2.0 hub".

I tried a Dell Precision notebook with only USB 3.0 ports and was still getting the USB 3.0 message.

After trying a few different PCIE USB 3.0 cards, i have found that the best I can get is the 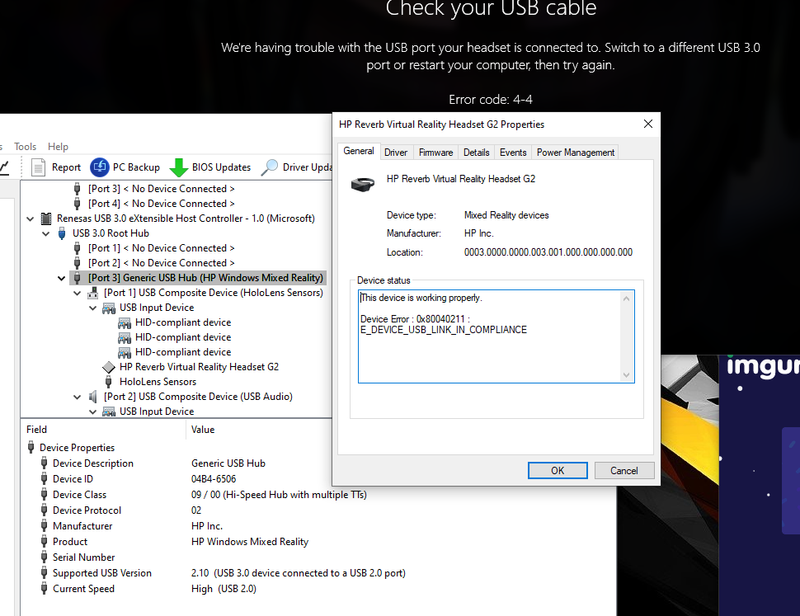 I reviewed your post and I understand that the Reverb G2 is not getting detected on the computer.

I recommend you contact support and they will assist you in this regard.

How is this problem solved its clearly not - as for the HP Support team, is this the same one that says they will call back within 24 hours and after 4 calls have not done so once?

I would be interested to note if the user got a solution - not just a phone number that basically is just a pass off.

Indeed my problem is not solved. I marked this thread as resolved because they did the best this place has to be offer, which is tell people if people have a problem unrelated to their product then direct them towards HP service in the event actual service is required. HP promised a replacement cable the next day I got my headset (December 20th). Took two more attempts before I talked to somebody on the workstation team (ChrisL) who I forwarded all my info and screenshots to. Chris promised a cable but said they had none on hand. No ETA for replacement cables either. I paid 900$CAD + HP Care pack next business day. I guess between December 20th and January 3 I guess HP isn't doing much business 🙂

I'm going to laugh so hard if I get a replacement cable and it's the main unit in the end.

Hey thanks for the clarification, really appreciated and lol sounds about right!  It's actually the worse customer service i've every experienced in over 5 years experience in the VR sector.  I'm over 40 and been around the block a few times (ex COO and now a consultant) however i have to say the total lack of support is shocking.  It is hilarious that they are trying to pitch this to enterprise and for business application by their marketing team and website.

I have thus far had 4 separate conversations all promising to get back to me within the next day or so.  No one does.  Eventually in the last few days i got what i perceive is an automated email from the system saying March for replacement unit, after chasing with numerous emails to the case number allocated.  Either that or someone that didn't want to put their name on the email.

The reason why they have no units is because they decided to not ship them to the pre order partners for spares for RMA (despite having initial feedback of DOA units)  but instead make a fast buck by selling them on their own online stores.  Even when pre order customer's still didn't have their headset.  Crazy, It's come back to bite them hard.

Anyway 3 weeks later, 4 PCIe cards and 2 hubs and literally 25+ hours of investigations and problem solving i'm no further forward except identifying that one of the Cypress chipsets will not establish a 3.1 superspeed hub.  The only comfort is that there is a lot of customers also in the exact same position although they just say USB connection speed etc.

Its a shocking product with so many connectivity issues relating to 4-1, 4-4 or 7-15.  All from people that have updated BIOS, Chipset, ME and all drivers to microsoft.  Some have had the units working for a few days for it then to never connect again.

Its not just X570 boards either - far from it.  Have a look over on the support discord groups there are so many customers with issues and so far i've yet to see anyone say they got any customer service satisfaction or a resolution to the issue.

Oh and someone else spotted that HP have been deleting posts from this forum also and that has now over 1000 upvotes on reddit.  Clearly not confident in this product either for them to try and censor issues.  Shocking to be honest but a fault of their own making.  Can't exactly complain when your paying customers keep trying to make something work out of their own pocket and don't get any communication back then post realistic feedback of how bad the situation is.

You never know one day HP might release a statement to acknowledge the issues along with a clear road map to reassure the 100's or perhaps 1000's of customers they have let down thus far.  Then again they might just choose to bury their head in the sand like they have done for the last month and let this problem exponentially grow.

Yea i think now looking at the whole situation its comical, its that bad its actually becoming like a Monty Python sketch.  Get ready for the laughs i guess,  but wish you good luck, perhaps keep updating if you hear anything more.  As for the cable, great idea making it 6m long, not using Fibre Optic and securing it with a clip that a high school student can design and make better though.  Maybe the R&D lab was shut this year, can be the only explanation as i struggle to understand how this made it out the door in its current state.

Decided to go public with this so it gets proper attention. I really don't think my cable is defective. HP Has no ETA on fix or on parts.

After connecting a USB 3.0 Hub to my Fresco logic FL1000 and connecting the reverb to the HUB i get Error 43 Port reset failed. here is the full USBTreeView x64 Dump : pastebin.com/Ktpzpyef

The manufacturer of the USB HUB inside the Reverb is Genesys Logic Inc. ( 創惟科技股份有限公司 ) it SEEMS it does not like working above USB 2.1 speeds.

Here is the device manager output.

Let's get a firmware update out and be done with this please!