I know! That's what others say!

Please click “Accept as Solution” on the post that solves your issue to help others find the same solution.
Click the “Thumbs Up” to say “Thanks” for helping!

part surfer was a dead end for this issue

If you look carefully at the below image, you will see that the OMEN 870-1xx series is provisioned to support three (3) physical hard drives. If you want use more three SATA devices then I suggest that you not use the optical drive if installed but instead use a USB connected optical drive. I even ran into this situation of not having enough SATA ports on a Z270 chipset motherboard and elected to use an USB optical drive.  I seldom use optical these days and more and more PCs are being sold without optical drives.  Optical is a dying technology. However if may still be beneficial to you. If the PCIe x1 slot is open in your PC then you could add a PCIe card to provide additional SATA ports. 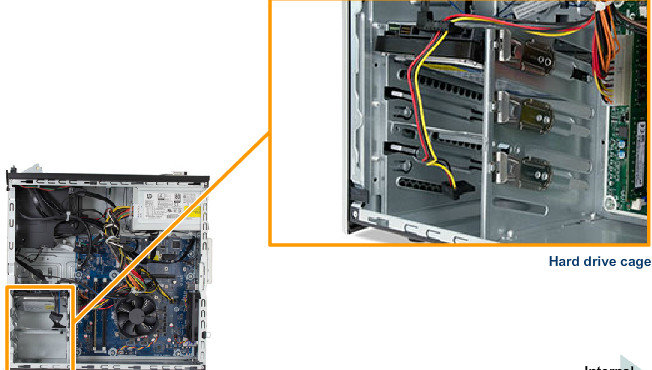 yes this is where i have finally arrived at aswell

as a problem solver for me ... nice imaging btw

" If the PCIe x1 slot is open in your PC then you could add a PCIe card to provide additional SATA ports."

for: Startech SATA Power Splitter 6in

Connect the "middle" to one of your existing power leads, and each "end" to one of the SATA devices.

seems to have FIVE sockets for SATA devices.

I opened it up, ready to install a new 3rd drive, and there's no SATA DATA cable, although there is a ribbon power cable that would allow installation of additional storage.

What am I missing? Only 3 SATA ports, one of which is connected to the Optical drive, and the two others to an 256 SSD and a skimpy 1T 7200 rpm HDD. Why bother with a power adaptor to another drive without the requesite SATA DATA cable?

I searched Startech and couldn't find a SATA data cable splitter, although did find the power splitter and ordered it for nothing. When people state there's a solution and point to a adapter/splitter, make sure you are stating that it's just for the power and not DATA, please. I'm computer/tech savvy, but am a Mac convert who's used to those 4 hot-swappable drive bays in Mac Pros of yesteryear.

So it looks as if the PCIe card is the only real solution if I don't want to condemn my Optical drive by using that cable?

Man, HP, if you're going to publish specs on websites that indicate the presence of 4 drive bays, why not just come out and state that you aren't providing the required SATA DATA cables? I need tons of HDD space and could have accomplished my objectives to a limited degree with a NAS, however I deciced I wanted the option to edit large photo and video files on a newer machine. That's why I purchased the HP. But without the physical drives to hold those numerous, large files, and to catalogue my massive archives, I might as well go back to Mac and buy a NAS.

The graphics card appears to take up all but one PCI-e slot in the machine, as it's double height. It looks as though installing a card and then using a SAS splitter is an option if I want to install two more drives, but this is ridiculous.

This is a nice machine, and probably more than enough for most users. But the advertising is what's getting my here. The tech were I bought the machine also told me that I could add two more drives.

And no, I'm not taking out the HDD, photographing the screws and posting it here. I know what they look like and so should you if you are advising in this forum.

Any suggestions re splitting or adding another SATA DATA cable (NOT power, as there are ample ports in the machine) would be greatly appreciated. Maybe I am missing something here and it's a simple fix, but I have looked everywhere and cannot find another SATA DATA port.

> What am I missing?

> It looks as if the PCIe card is the only real solution, if I don't want to condemn my Optical drive by using that cable?

Not, there are other options.

The Other Person suggested an external USB-interface CD/DVD device, to free-up the SATA cable and the drive-bay.

Or, if you have a "home computer network", you can "share" an internal CD/DVD device on some other computer,

and then connect, over your network to that shared resource.  Obviously, not bootable via this "sharing" method.

If that socket supports M.2 SSD, then you can remove the 256 2.5-inch SSD, thus freeing-up one SATA port and one power-cable.

> Why bother with a power adaptor to another drive without the co-requisite SATA DATA cable?

For HP to save $2 by not including it.

I have never heard of the existence of such a thing -- not since the stone-age of 40 (or 80) wire Parallel IDE cables.

Thanks so very much, mdklassen!

It has the same model number on the Motherboard, though, so I thought I was in the right neighborhood.

I did post another question with the right header for the correct model number, but let me reply to a few of the great suggestions you made.

The optical drive is a real issue for me because I have a lot of photos on CDs/DVDs that I need to move to HDDs, and I have a ton of them to get through and don't want to get slowed in the process. A network solution would be ok, but not ideal given how much equipment I already have on it - Come ot think of it, I already have a networked DVD player connected to my Apple Time Capsule router and TV that's also wireless. Gawd, it's horrible when you've got so much stuff you can't recall what you have.... but that's another topic.

I also don't want to use a precious USB 3 port because I have to connect several external HDDs and they will slow down with a lot of traffic if I use the hub instead of direct connecting to the machine (it's a pain to reach the USB 3 in the back, not the top of the machine).

Re the SSD - I will take a look and see what's in there. That's a great suggestion....

Also, I am not familiar with this device, but it might be something worth looking at because of my need to connect multiple drives. It's here: and it called a "Cable Matters Internal Mini SAS to SATA Cable (SFF-8087 to SATA Forward Breakout)"

I don't know if it would work or not. I found it by searching "SATA data splitter."

I assume that I am restricted in the SATA department in the same way as the one referenced due to 3 SATA ports on the motherboard. I know what these things look like, and have searched high and low to no avail. I just thought I might have missed something....

If you know anything about that device I posted a link to, and think its a viable solution, could you let me know? I'd really appreciate knowing my options before I take the SSD out and look at it. Less handling is better, imho.

It's really wierd that there are extra power SATA cables, numbered, that would allow two more drives but without obvious SATA Data ports.... That's why I am quesioning my eyesight, and the jumbled mess of cables that are shoved in around the optical drive and power supply. Maybe I am just missing something here.

Thanks again, I appreciate the speedy reply!!