I just paid $1300 for the Omen Gaming PC for windows 10 which was a waste of money. I was told that you could go to the bios and set the Power On option in the bios to have the pc boot up on specified days and a specified time. There is no such option noted and I spent a lot of money to buy this box and was told it would do that.

I did process the return and will receive a new PC that does support bios Power On support. I did not upgrade the bios either due to your comment not to above suggesting this should not be done. This issue can now be closed - thank you for your help and support.

What is the full model or product number of your Omen?

The product number is located in the HP Support Assistant.
Go to the Start menu and scroll to H>HP Help and Support>HP Support Assistant.
Open the program and click on your computer in the list.
The Product Number will be listed either on the top or bottom of the window.

And WHO is this person who told it had all these features?

It was one of the tech sales person at Best Buy. I will follow the steps you you suggested to find the number and get back here soon. A power on option should be in all PC's sold now. This is the first HP, Dell that I have not seen it in the bios. The tech also told me that the demo's do not always let you see everything on their sales boxes.

Its not listed and and you don't allow an attachment so can't even send you a screen grab. I did see an option to add a picture so here it is: well that didn't work either so will save it to google drive. The more I use this gamers omen box, the more frustrated I am getting. It would be helpful if you could add a file to send here.

I was able to get this information by going to my computer:

OK I see what you mean. Im not sure why the HP Support Assistant is not there, very strange.

This wasn't a floor model from Best Buy was it? It was new out of the box?

Here is the download for the Support Assistant... https://support.hp.com/us-en/drivers/selfservice/swdetails/omen-by-hp-875-0000-obelisk-desktop-pc-se...

You can also tap F1 at power on and get info about the product number and which version of bios is installed.

Your motherboard should be SSID: 84FD. The bios for that is F.14  https://support.hp.com/us-en/drivers/selfservice/swdetails/omen-by-hp-875-0000-obelisk-desktop-pc-se...

Every HPs bios can be a little different. The business line usually has more of those features than the HP Consumer PCs. HP's bios are probably the most locked down system on the market.

If you go into the bios, is there an Advanced Tab?

If so, does that give an option for bios power on? 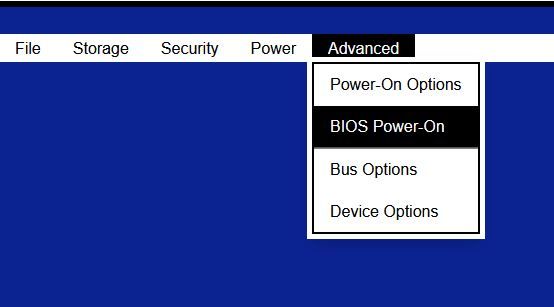 If that is there, you should be able to go to the days of the week...

If that is not there, then HP has disabled it and there would be no way of unlocking that function.

I am so happy to be talking with someone that is truly knowledgeable and it is my hope that I can keep this Oman Box and now to have to return it to Best Buy within the 14 days of trial period.

There is no advanced tabs in the bios. I get to the bios by tapping the esc button over and over at boot up until it comes to a menu screen with F1 and on. I chose F1:

Please pass on a suggestion to add a button to add an upload - most tech helps site have that and it makes it so easy for the user.

Just so you also know, I purchased two memory sticks which are faster then the one which came with it, 16 mb and now have two sticks of 16 mb. I also added a wd 4 tb internal hard drive for more storage added to the 1 tb that came with the box and the digital state drive c that came with the box - love this drive as its so fast. Also I hope to keep the game oman box as all my (3) printers (1740) are HP and the main one installed with out a hitch and asked after it found it via wireless it asked me to download and install the software for it option - so professional!!!  I hope you can help me get the auto boot up option as that is the only reason I purchased an expensive gamer is for graphic speed. Because I travel a lot I need to have all my PC's boot up by themselves so I can log in from my HP laptop to do my work from my home computer (now this gamer) box and shut it down each night. Hope this makes sense.

One other thought: for some reason you can not get to the bios options for reboot through Settings-Security Updates.

"I get to the bios by tapping the esc button over and over at boot up until it comes to a menu screen with F1 and on."

Yes the ESC button will offer a menu to choose from and F10 will be the bios shortcut. That is the best way to get into the bios.

"There is no advanced tabs in the bios. Bios tabs: Main-Security-Configuration-Boot Options-Exit"

Yep, that is how every other Omen I have looked at is setup also. So HP did not allow that option into the bios this time either. Looks like that bios feature is only available in some of HPs Business/Enterprise models still.

I purchased two memory sticks which are faster then the one which came with it, 16 mb and now have two sticks of 16 mb.

I assume you meant 16 GB (gigabytes) of ram. Thats ok if its recognizing the sticks, but how much faster are we talking about? Problem is, by default the Intel system will lower the speed back down to what it was setup with at the beginning. So if you had 2400 Mhz ram originally, and you install (for example) 3000 Mhz ram, the new ram will be down clocked to the default system setting of 2400. So you wont gain any speed, only the added capacity. There is no way to make it clock back up in a HP.

Ya, the forum doesn't allow for attachments for security reasons. You would have to take a screen shot (I use the snipping tool in Windows) and save it as a PNG or JPEG. Then upload the image with the camera icon at the top of the reply box for photo uploads.

" I hope you can help me get the auto boot up option as that is the only reason I purchased an expensive gamer is for graphic speed."

Unfortunately as I pointed out earlier, there is nothing I can do. HP Consumer PCs have the most locked down unavailable bios features of just about any other PC MFG. I dont know what other MFGs have offered in their bio's to suggest. I can only speak for HP. But if this auto boot is a MUST HAVE feature, you might want to look into a more custom built PC with a name brand motherboard. Otherwise you would have to look into an HP Enterprise business class PC.

The salesman at Best Buy should not have told you this would have those bios options, there are several OEMs out there that also have limited bio's also and apparently he has no idea. But not the first time a salesman was eager to make a sale. 🙄

Does this cover what you needed to know?

1. I was sure you were going to end up telling me that the bios does not offer a power on bios option - this is not good news and I do not understand why HP does not include this option in its PC's. This choice is not a very good marketing strategy and will keep me from purchasing HP PC's in the future. I lost $1300 on this purchase and was told my needs would be met but the power on option cannot be met per your comment-feedback. This also leaves me with concerns about HP being able to provide a basic bios option in their boxes.

3. You seemed to answer all other concerns and the only one that I need did not have a reply from you as to weather or not I need to update the bios and the steps to do so.

Sorry I didn't get that posted earlier. I don't recommend updating the bios unless its absolutely necessary. Doesn't matter what brand of computer. Bios's are a different thing altogether and if it were to fail in the process, it could brick the motherboard. But you are under warranty so you are covered.

And Im not an employee, just a dumb volunteer.