Thanks for the update. I was just reminded by another expert that HP motherboards (at least most of them that we know of), will not accept the unlocked (K) CPU's. So it would seem the specs are correct if it does not include a K model in the list of upgrade options, even though technically the mobo would generally handle 95w TDP.

The only real way to know if that CPU is working, is to test it in a different motherboard (non HP).

Although, new CPU's that are DOA (while it is possible) are not very common.

You should be good to go.

HP Recommended
Thank you. I installed the i7 gen 7 chip and stock heatsink / fan. The computer ran fine at first, I downloaded a new game that required the i7 and as I was setting it up the computer crashed - monitor said no signal. I tried multiple times to reboot without success. I reinstalled the i5 and the computer booted up fine. Any ideas?
Was this reply helpful? Yes No

Not really, which Omen product number do you have specifically to know which bios it yours in the specs page?

4.Find the System Board ID (SSID). This will enable @Photoray002 to suggest correct BIOS update. 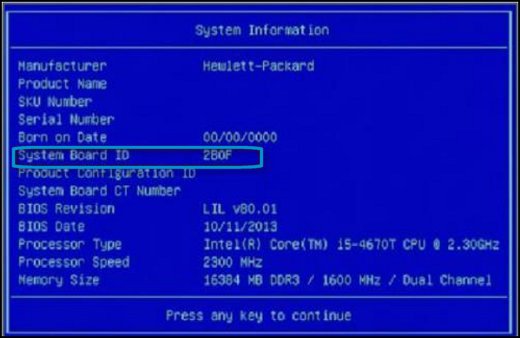 **Click Accept as Solution on a Reply that solves your issue**
***Click the "YES" button if you think this response was helpful.***

Yes, you can do that or just give us the full product/model number.

Its in the HP Support Assistant.

1. As other suggested, check that your BIOS is up to date - using the information above and comparing with what's available below:

2. As others asked already: was it 7700 or 7700k that you bought? It was never confirmed by anybody here if the latter would also be supported, or not.

And keep us posted as I'm thinking about doing the same at some stage.

HP Recommended
Sorry, forgot to respond on this point, it's an i7 7700K processor. Thanks.
Was this reply helpful? Yes No

"As others asked already: was it 7700 or 7700k that you bought? It was never confirmed by anybody here if the latter would also be supported, or not."

Thats correct Krezmien, i did not state yet until I get the facts first. 😉

While the Odense2-S has two separate specs pagees stating different supported TDP: Up to 65 W and TDP: Up to 95 W, both only state the maximum cpu allowed is the i7 7700 non K version. I have to assume the bios is set up to only accept the non K version. Specs page for this model also states it will only support an upgrade to the non k version. 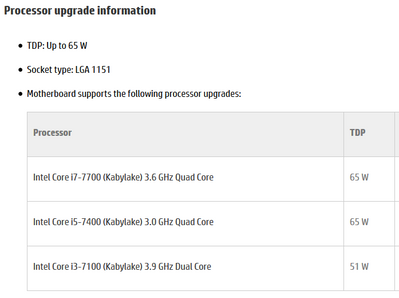 If installed, cannot be rolled back to a previous version.

There is no mention in the verions that the unlocked 7700 support was added.

All I can do now is go to HP and ask for clarification on this. I have a feeling I know the answer I will be given.

But I will ask today and see what happens. I dont know when I will get responded to, but will let you know what they say.

IF we can determine that the 7700K is indeed also supported, then you can look for a different cause for the problem.