Cpu bios Update made my laptop burning up

At the start of the month i updated the the cpu bios and from that day on, i do not hear my second fan working and the laptop has an increased temperature when idled at the right side, gets too hot when gaming.(60- 65Celsius the temp of the cpu when idled. The program used to count it is open hardware monitor). What can I do to fix this?

Sorry for my bad grammar.

Hello @morgoth1  I'll try to help best I can. Bios issues can be very tricky.

What is the current bios version you installed and how did you install it?

You can run the HP Support Assistant to find the bios information or you might be able to press Control/Alt/S to get an info menu in Windows.

Now see if it will let you revert the bios to a previous version using the Windows and B key combo...

I updated it from windows update. I read about the windows key+ B combo, but I was not able to change my bios version for some reason(It did something but when i checked the bios version it was the same as before F.19 12/12/2019). I am worried because i downloaded Speccy and Speedfan to check the temps of the laptop and the motherboard is shown to have 70 C.(That value is shown on SpeedFan, Speccy does not show the motherboard's temp). Also I set my cpu Performance on 70%, because on idle it has 65C temp and sometimes 70C. Have checked for the cpu load and is at 10% on idle, so i don't think that it gets hot because the cpu is running heavy stuff. I searched for an older version of Bios to load it from a usb, but i could not find anything from hp's site , except the newest version of bios update. My main reason for posting is because i don't hear the fan spinning a lot and in Speedfan i never see the second fan spinning higher than 140 rpm.

Read this all the way through before attempting the bios install.

Oh man, this isn't the first time Ive heard this happening when Microsoft sends a bios update to an HP system and it causes errors. You always want to download those updates yourself and run them. Not MS updates or the HP Support Assistant.

Did you also try resetting the bios after the update to see if it helped? Reboot and tap F10 until you've entered the bios. F10 to reset, then save the changes and reboot again.

You have several previous bios updates. You have to expand the Bios section, then expand the Previous Version section...

See if F.18 will reinstall, even though the Win+B key didn't work. If it still does not change, then its not going to. 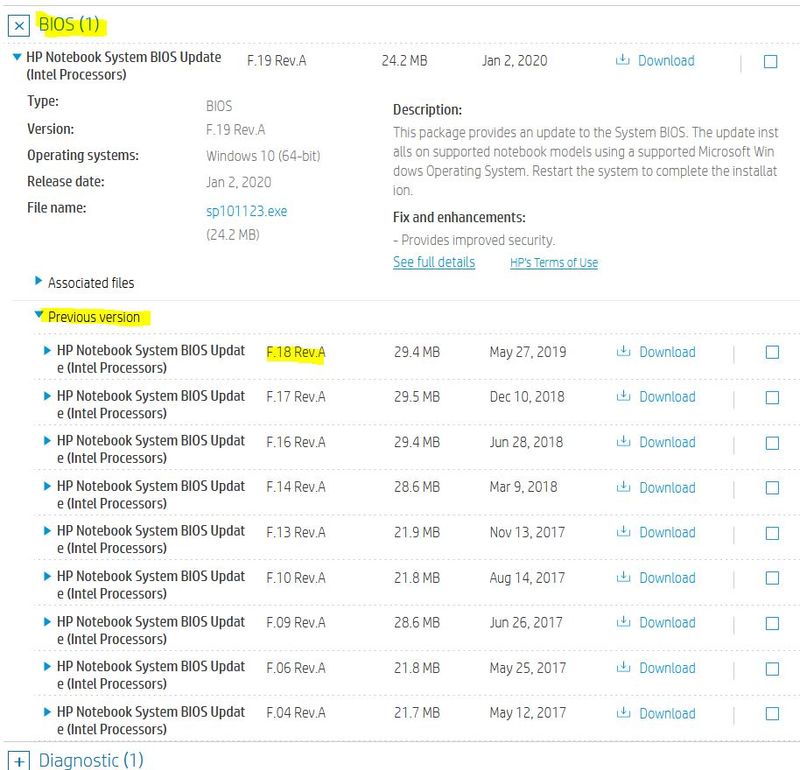 ! Do this at your own risk !   Installing Bios' can be tricky and if it were to fail during the process, it could brick your motherboard. This rarely happens, but possible.  Just so you know.

Reset everything you have tweaked in Windows to default first and also go into the bios and reset it.

Then try the bios install. I wont have any other fix to make the bios change.

The second fan does spin slower than the CPU fan, but Speed Fan does not always accurately report it on an HP. I don't care what someone else says on the internet. You cannot tweak the fan speeds so just uninstall it.

Try HWMonitor for your temperatures. HWMonitor does an excellent job on reporting temps. Use the Zip version and it wont install in Windows, just run as a stand alone that you can store and run from any drive. https://www.cpuid.com/softwares/hwmonitor.html

Reboot and only run HWMonitor and watch the temps for a while at idle to see how its doing.

Make sure you don't have any unnecessary things running in the background in Startup.

CPU Performance (this is not a fix, just a work around)... Typically, you should only have to set the Power settings Max Processor State between 94-99%. This turns off the CPU's auto turbo clocking state. (The sweet spot varies between those numbers on different systems)  This will drop the performance of the CPU a little, but the CPU temps also drop. 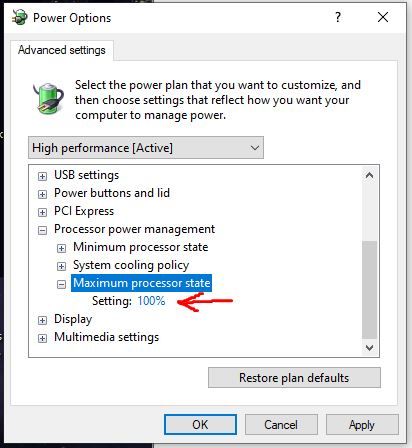 Thanks a lot for your tips have tried everything you said already, the first program to check the temps was open hardware monitor, I just did not said it, because it in v0.9.I also lessened the great changes in temperature(from 60 to 80C, by disabling the turbo boost with throttleStop(now stable 56C). Also thanks for the bios files I had not seen the previous version option. When I try the bios installation i will post the result.

Update: I tried to update the bios with the usb method, but for some reason it throws the error unable to open BIOS signature file. Also tried the bios rollback option to bios version that the pc came with, with no success.