Also, is there someplace where HP makes available older versions of BIOS, or at least the history ?    I just want to look up the update history.  Thanks for any ideas you may have.

All I see it version F12. If you expand the drop down arrow for Previous Versions, you will see what came before it.

Do you have a version F13 installed now? If so, did you run the HP Support Assistant for the update? It might have installed a newer version that HP hasn't put on the drivers page yet. 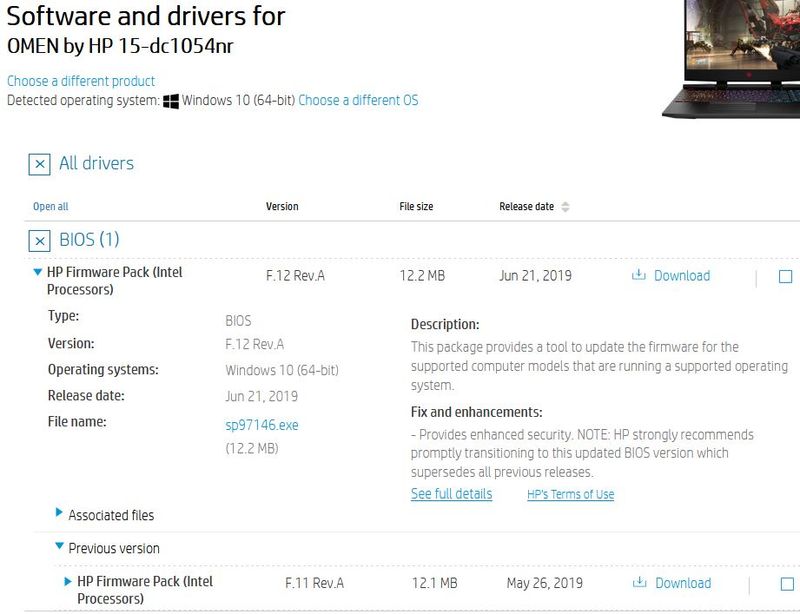 @Photoray002,  I haven't updated my BIOS.  I just went to the existing BIOS screen during bootup to see what I had, which is where I found the F.13.       I didn't know how to take a screenshot form the BIOS screen (maybe can't), but I did take a picture of it with my phone, if there is any specific information there that might be helpful.  I just find it strange that F.13 is on  my new laptop but F.12 Rev A on the website.   Thanks!

Ah OK.  One of two possibilities...

Open the HP Support Assistant and change the settings to not auto install updates.

There should be an option  to not check for them, or check but let you decided what to do.

I do not let the HPSA choose the bios for me. There have been a small few issues with that before. I personally don't update the bios unless I absolutely have to. If I do, I grab the file from the drivers page and install it.

I have also read a couple of posts where users recently claimed their bios updated through Windows Updates.

I have not had such a thing happen to me and I was told that sort of thing wouldn't happen anyways, but according so some, it has.

Okay, thanks a lot.  I'll explore that.  I was mainly just wanting to see if the manual fan control in the Command Center (which chooses between Auto and Max) had been added for Gen 2, in the same way it had been added for Gen 3.  Apparently it hadn't, thus I likely won't update my BIOS, but I still want to understand whether I have the latest.   I'll follow your guidance.

Very good then. Most likely the HPSA auto updated your bios and its not listed in the drivers pages yet. Its not completely uncommon. But yes, if your system is working with F13 (and apparently it is), then I'd say F13 is the latest bios.

As far as the command center goes, exactly what did you mean the gen 3(?) has auto and max fan control?

There is the option for Performance Control that will modify fan behavior some what. Is that what you're referring too?

Regarding Gen 3, it's how some people are referring to the latest / 2019 model of Omen 15 or Omen 17 laptops.  You can tell by looking at the hinges for example.  Below are some pictures, with Gen 2 on top showing two separated pillars to the display and Gen 3 with one larger pillar in the center.  Gen 3 has a different cooling arrangement.   Recently in Gen 3 there has been a new BIOS update that adds this new button in the command center to switch the fans between Auto and Max (see some of the other posts I've made recently).   In the 3rd picture below, look for the blue switch on in the Command Center window.    By the way, I could still use some help on whether the integrated graphics can be enabled for the GTX 1650 versions of the Gen 2.   I'll post that separately.  Thanks again. 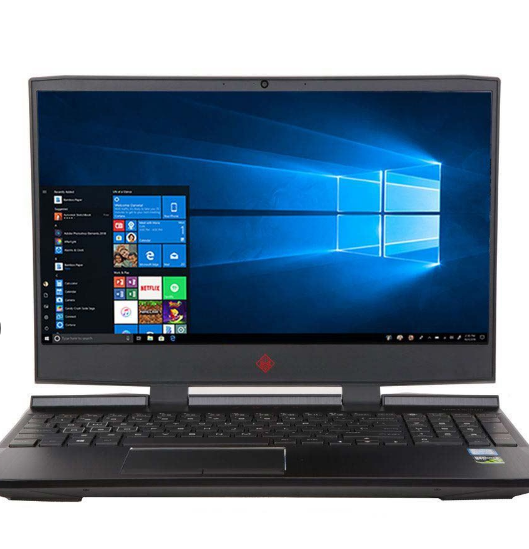 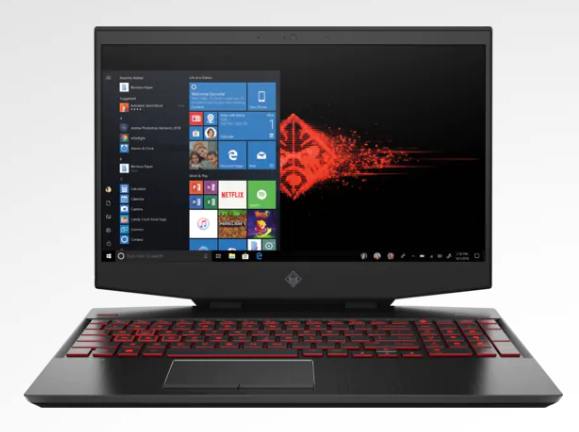 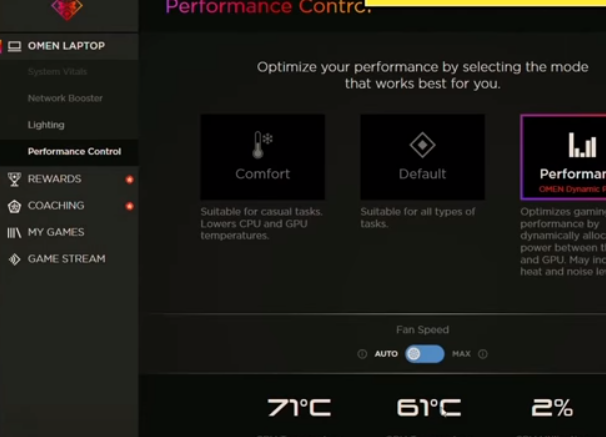 Ah OK. You're referring to Gen 3 as the Omen 15-DH0000 series. I don't know where some of these guys come up with those naming schemes. Its actually not a gen-3 to me, but depends on how you look at it. 🙂

And Thank You for the screen shots. HP does not inform any of us on the forum of changes. We are on our own. Ya, doesn't make sense. LOL

As far as the integrated graphics on Gen 2 aka: Omen 15-DC1xxx and DC0xxx.

The manual shows the DC0xxx series as having Optimus on the low end cards.

But the DC0xxx series uses the NVIDIA 1000 series, not the 2000 and I dont know if HP changed the rules on the DC1xxx series or not. Anything is possible.

If someone who has the DC1xxx series with the 1650, would come forward and give us a screen shot of the NVIDIA panel or such, it would be helpful. I would show HP and ask to have the manual corrected. Without proof, anyone I talk to wont be able to help. Best I can do. 😞

Half the time when I put a request for info out there, it goes into the wind.

OK I have personal hands on experience now as I have the DC1057nr in my hands.

Despite the information not explaining any Optimus support on that series Maintenance  Manual, the models with the GTX 1650 do have Optimus switchable graphics. Here are the screen shots (from my camera, sorry had no time to do much) that show its enabled at first power-on before any updates. 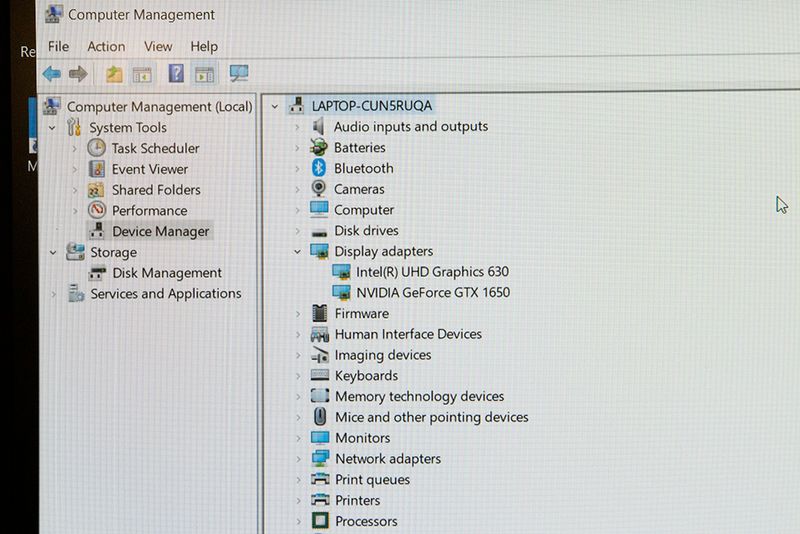 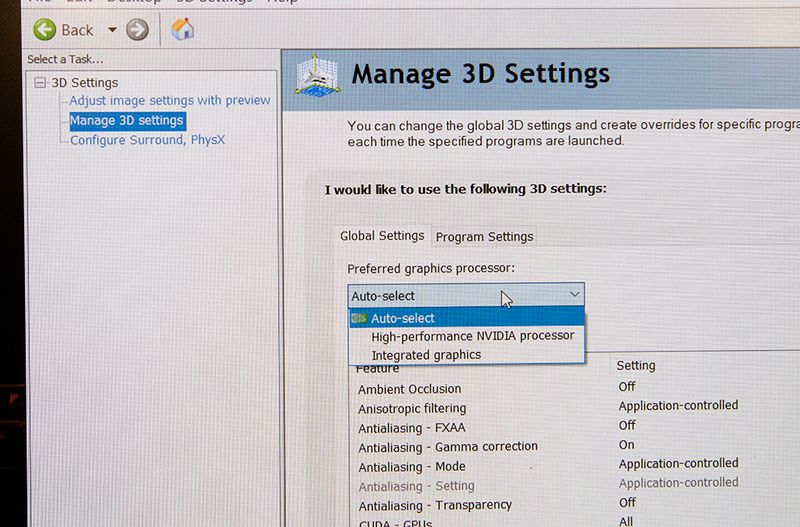 You also asked about the bottom cover vents, here is what it looks like... 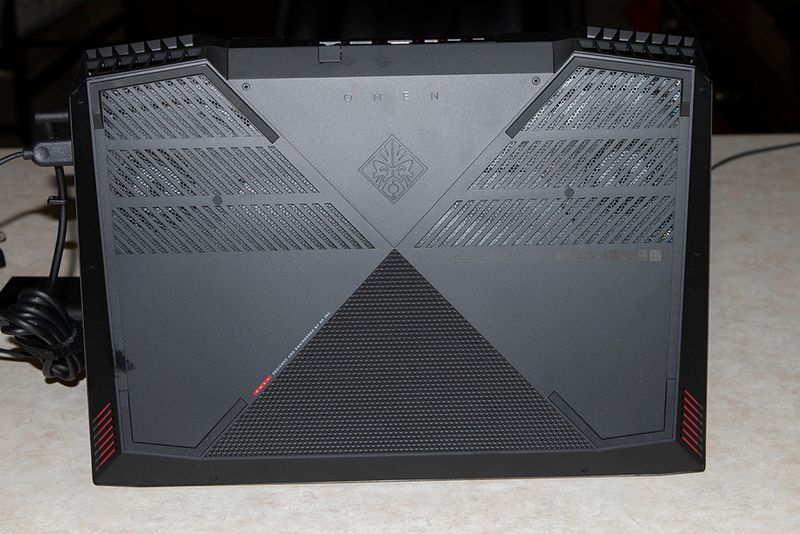 Wow, thanks a lot @Photoray002.    It kind of flies in the face of what it seems HP had been saying, but it makes sense in terms of the battery life claims for the GTX 1650 version, and in the sense that the GTX 1650 is the successor to the GTX 1050 where Optimus is supported.   Really appreciate your hard work on this.  You really went above and beyond !!!!!

It makes for an interesting dilemma.    In this forum I would suspect more than 95 % of the customers would go for the GTX 1660 ti max q version, which has roughly 30% better GPU capability (depending on the benchmark), versus the GTX 1650 version that gives the option for UHD 630 for better battery life on the road when not gaming.   But for me, I think I may go for the GTX 1650 version.  Some thinking to do.

Too bad HP doesn't go ahead and offer it for the GTX 1660 ti versions.