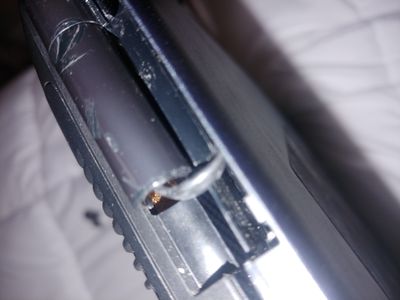 I was willing to chalk this issue up simply to wear and tear, but after looking through these forums and elsewhere on the internet, I've come to see that the hinges for this particular laptop are a pervasive problem for a lot of people who have had it.

It seems like the hinge itself literally snapped off its respective attachments inside the plastic border around the screen. This was after about 48 hours of that hinge becoming increasingly stiff and difficult to manipulate in its normal range of motion, causing the plastic housing around it to further split apart until finally, after I tried sliding it back together for the umpteenth time, something snapped off, rendering the hinge completely immobile and stuck in that "closed" position. So while the laptop still functions fine in terms of being on, the right-hand hinge is completely out of commission, putting tons of stress on the remaining hinge; its plastic housing is already starting to come apart on the other side, and the whole machine has to be handled extremely delicately to avoid everything snapping under its own weight at this point.

I don't know if my laptop is under warranty anymore - I've had it since early 2017 at this point - but like I said, there seems to be enough consternation around the hinges on this specific computer floating around that I really hope something can be done about it.

@noahzuniga I understand your concern and I have brought your issue to the attention of an appropriate team within HP.