A few weeks ago, I was typing an email and all of the sudden the computer just instantly shut off -- I was plugged in -- it was the equivalent of watching TV and the power going out.

Lately, this is happening more and more often.  There's no rhyme to reason -- its not like it only happens with using certain programs.  Ive run the HP diagnostic on all aspects of the PC and I've done the UEFI diagnostics as well -- both the fast and the extended.  Nothing shows a problem on the diagnostics.  Battery says its okay.  Maybe it isn't a power issue?  I've run HP update and Windows update to ensure all drivers and software is up-to-date.

This is so frustrating.  The computer is out of warranty; I spent a LOT of money on this machine.  Why is this stupid problem happening?  How would I even start to try and fix it?!?!?!?

Any really smart people out there have an idea on what I should do next??

My first suspicion is the magnetic switch in the case is falsely being triggered. Magnet switches are connected to the power so that when the lid is closed, the laptop can go to sleep or wake.

Are you by chance placing your cell phone on or next to the laptop? Or if you're wearing a metal object that is magnetized?

Does removing any of that solve the issue?

Some other things to try (one at a time, then test so you know which fix was the answer)... 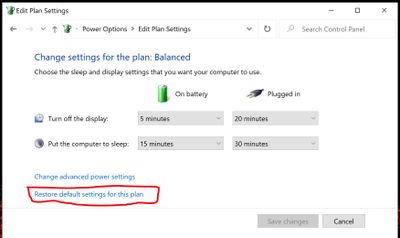 2. Disable Fast Startup... Right click on battery icon in system tray > Power options >Choose what the power buttons do >Change settings that are currently unavailable >Shutdown settings and "uncheck" Turn on fast startup. Then Save change. 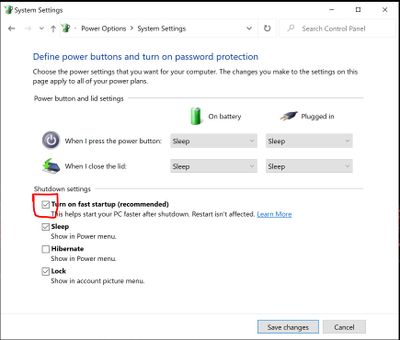 3. Change Critical Battery Action... Right click on battery icon in system tray>Power options>Change plan settings>Change advanced power settings>(in the pop up window, under the Battery category)Critical battery action (and expand the + sign) > In the list find... Plugged in: and change it to Do Nothing. 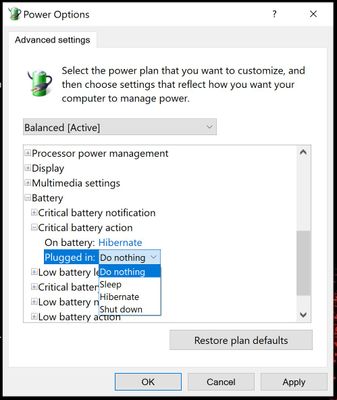 Hope one of those helps.

Thank you SO MUCH for the information, @photoray002 .  Question: how do I check that magnet?  Can I find this info in the HP documentation?

Another question, if it is heat related, how do I check the fan, clean the fan etc etc?  How can I find out how to do this?

Thank you very much for your help!

Go through the steps I gave above to see if it helps first.

As far as the magnet goes, I believe HP still uses them unless they have designed a different approach into the power board where the switch connects into.

Take a look at this article on the magnets and trouble shooting.... https://www.ifixit.com/Answers/View/486184/Lid+Switch+Location+and+Teardown

On the temps... You have the Omen Command Center, correct? Run that and see where your CPU temps are while you do stuff.  If you are getting into the mid to high 90's with the CPU, it would most likely throttle down instead or shut down completely.  You can use some canned air and blow into the vents and fans back and forth to loosen up any dirt.

If its really clogged, you would have to take the laptop apart including the fan shrouds.