My HP Omen 17-w295nr crashed earlier today and will not turn back on. I tried powering it back on normally, unplugging external monitors and turning it back on, and unplugging the power adapter, but that hasn't worked. The LED charging indicator does not turn on while it is plugged in, so I followed the maintenance & service manual to remove the back cover, unplugged the battery, held the power button down for 10 seconds, plugged the battery back in, and tried powering it on. I still have had no success, and I'm beginning to worry that it's a motherboard issue.

@hdmccullough  It literally crashed while it was on and in use?

Well there are a couple of things you can try, but if the charging light does not come on at all, something in the power route has most likely went south.  Its possible the charger failed but I doubt it if the battery was still supplying power.

You can try disconnecting parts to see if the system will come on. If you're lucky, you can fix it then.

2. disconnect the memory one at a time (pulling one stick and leaving the other in) and booting it (provided you have two sticks installed). If only one stick, swap slots that its installed in.

3. disconnect the hard drive. See if it will offer anything like a no boot device found or try F10 to get to the bios.

If you still cannot get a light to come on next to the power port, it wont start at all and your charger does work, something in the motherboard itself has failed. I'm sorry.

That's the best I can offer. 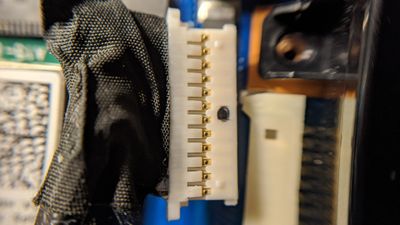 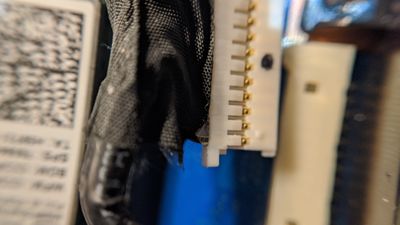 I also grabbed a couple shots of the battery's connector. I don't have the best frame of reference because I don't know what it looked like on the original battery, but it does not look great especially compared to the other cables/connectors from original parts. As best as I can tell, everything is still connected, but the tape wrapping and open wires on the left side do give me a bit of pause.

Edit: Adding an external link for the images, because they don't seem to appear on my post.

It's been something of an issue for about a year now, but it has had a habit of spontaneously crashing. This time, however, I pulled my laptop towards me on my desk, there was an audible click, a rattle, and it was gone.

I did have it serviced a year ago where I bought it at MicroCenter because the battery had started to swell and the shell had cracked around the hinges. This was my first time opening it back up and wow, I have no idea what I'm looking at. First off (and I'm kicking myself for not thinking to even check), the bottom shell case was missing 6 of the 10 screws; the two across the middle, and the four along the back. Popping the shell off, there were multiple missing screws, the battery was only being held in by 2 of the 6 screws (top middle M2.0x4.0, left top M2.0x5.0?), an M2.5 hole on the motherboard that doesn't line up with the back shell is missing a screw, hole 6 on part of the cooling assembly is missing a screw, and the rattling? That was a random M2.0x3.0 which looks like a screw used to hold down a board, like the wireless card or the M.2 SSD. I'm still not sure what it came off of, but I would need to disassemble it further to figure out where it came from.

Thank you so much for your advice -- I gave them a run though, but the charging indicator LED has yet to turn on, and I haven't been able to boot to BIOS. An additional (off-topic) question: is there a path to becoming a certified service technician? Looking at the handiwork above, I really think I could have done a better job.

Unfortunately the images dont reveal anything to me. Is the tape wrapping you are concenred about on the battery side, or the motherboard side? If the latter, you could un-tape it and see if any wires are shorting out. If the port for the Charger is loose, are the wires shorting out or broke from the soldering points? Otherwise if the other things I offered do not help, I think its an issue on the board itself somewhere. Thats all I can offer without it in my hands.

And yes, if your PC was returned with all those screws missing, the tech that worked on it did a very poor job. Its hard to find good employees, yes.  If you were in an area that has an HP facility that is hiring, you would have to ask HP what their requirements are.