I've made several attempts to copy the old harddrive onto the new one, and swap it out with the new one. I've been using a USB M.2 eclosure with the new drive, as there is only the single M.2 port in the Omen 15. I've cloned the old hard drive using both the Samsung Backup tool, and using Macrium Reflect, and each time when I try to install the new drive, I get the "OS Not Found" error on bootup.

OK all, for those that follow, I've found the problem.

So if you have this laptop you need the M.2 SATA SSDs. Those are the ones with two 'notches' on the connector side, the M and B notches.

I bought a 1Tb Samsung 860 EVO and that is working perfectly. 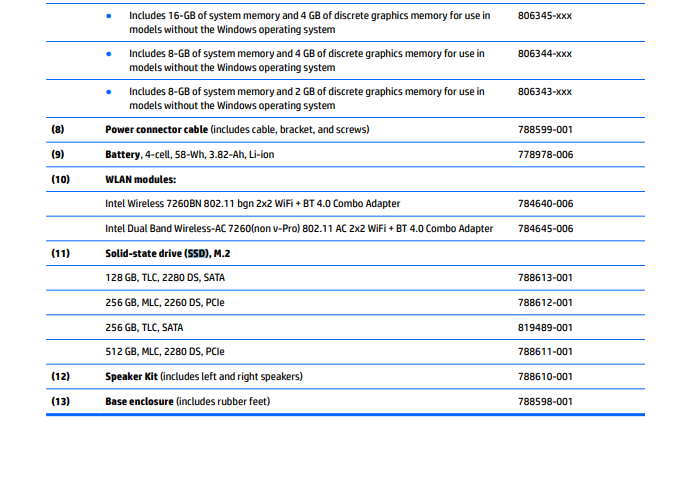 OK all, for those that follow, I've found the problem.

So if you have this laptop you need the M.2 SATA SSDs. Those are the ones with two 'notches' on the connector side, the M and B notches.

I bought a 1Tb Samsung 860 EVO and that is working perfectly.

Thanks very much for looking into this problem for me. Alas though, the potential issue you've suggested is not what has been my problem.

I did initially think that it was an addressing space issue but couldn't work out why that would be the case. I've seen addressing space issues when technology moved from 16 bit addresses, to 32 bit (I'm old and have been in IT since the early 90s) and that almost always meant that the BIOS did not read the size of the new HDD correctly when it was blank. Also FYI that extract does not match any manuals that I've found - that looks like a build list for a more recent version than the 15-5013tx . Storage is storage after all and that didn't explain why it was correctly seen with full correct volume size when unpartitioned and not seen when partitioned.

I did some trial and error and it turns out it was simply that the mobo doesn't support (or doesn't fully support at least) M.2 PCIe. It works when I used a M.2 SATA SSD with the M and B notches.

Thank you again though for looking and for being helpful! People like you rock 🙂