It has been a while since anyone has replied. Simply ask a new question if you would like to start the discussion again.
Highlighted
SteveC5
New member
5 2 0 0
Message 1 of 13
12,411
Flag Post

I have a new PC with Windows 10-64bit.  After many days I was able to install the LaserJet 3390 via USB (network connections always worked) with the Dot4x64.msi driver.  I am able to print without issue but Windows 10 does not recognize the LaserJet 3390 as a scanner - so I cannot scan (with Windows Fax and Scan or Adobe Acrobat - neither see a scanner attached to computer).

People with scan issues but with different LaserJet prints are told to clean up all HP drivers, reinstall the printer via USB and let Windows pick the correct (but very old) print driver.  I have done this multiple times - that is how I got the printer to install via a USB connection.

I even went further and cleaned up all the registry entries and reinstalled the printer via USB and Windows 10 default old HP 3390/3392 print drivers.

Very long story - short is I did remove all HP drivers using printui.exe /s "remove" and I also went into the registry and cleaned up all HP drivers (I was having issues installing the print via USB so I removed all the HP drivers).  I checked Print Manager, printui.exe /s and registry entries below and removed every HP reference:

Rebooted and verified there were no drivers on the system.  After the printer was freshly installed I tested with Windows driver and could print via USB but no scan recognition.  I ran the HP Print and Scan Doctor.  It found the printer but told me I was not running the full "software solution" on the computer - which eventually took me right back to the Universal Drivers for the printers at:

Bottom line I tried all of them and ran the HP Print and Scan Doctor after each and it keep giving me the same message - "Get Installer".

I nstalled each driver one by one.  In the end I am using the HP Universal Printing PCL 6 (v6.5.0) as this is the only driver of all of them that uses all the printer functionality (i.e. print of both sides) correctly.  The default Windows Driver has zero printer capabilities and the other drivers force manual dual side printing.  I tried all four "universal drivers" included managed services and all let me print and none let me scan (as scanner not recognized).

You are dealing with 2 different issues. The printing is done thru the drivers you have used and they seem to work fine. The scanning uses separate scanner drivers which are contained in some windows 10 applications. See the link below for how to get the scanner portion going.

Thank you for replying.  I have read the info at https://support.hp.com/us-en/document/c03501661 before.  This is talking about if the HP Scan Software is not available and not if Windows does not recognize the LaserJet3390 as a scanner.

When HP Scan software is not available, use a Windows Image Acquisition (WIA)-compliant software application such as Windows Fax and Scan when the printer is connected via a USB cable. This document is intended for HP LaserJet All-in-One printers.
This site points you back to https://support.hp.com/us-en/document/c04675396 which tells you what printers are compatible with Windows 10 and what drivers you need to use.  This site states that if you want to fax you must be USB connected (which I am), you must use the OS version of the print driver (tried this a dozen times and it makes the printer very basic) and you need to use the Windows Fax and Scan software (which I tried and without Windows recognizing the printer as a scanner you get the message below).

I have read all the HP sites and they are refer back to the same few pages that state everything I have tried (USB connected, native Windows OS driver, remove all previous HP drivers, etc.).
The problem I have is Windows 10 under any circumstance does not recognize that the HP LaserJet 3390 is a scanner so I do not have any option to even try to scan.  Tried all drivers (native OS and HP), started with fresh machine etc.

Hello, have you solved the problem? I am facing exactly to same issue. I upgraded to win 10 64bit and cant scan neither lan or usb. I tried all drivers. Thanks for any suggestions.

(it was in  hpljwia.inf_amd...  in File Repository on old machine ).

I tried to install it on new machine , but "compatibility issue". Later on I only pushed  hpljbfig.dll in \Windows\System32\Driver  and it works now.

I have the similar issue.

On a previous Windows 10 Pro System, I was able to use BOTHthe printing and scanning with the HP 3390. I see on the "older" system that when using the HP Universal Printing PCL 6 (looks like it was v 6.2.1) and Manage your device" in Windows 10 that the  dialog box stated that
"This device has a few diferrent functions. Pick one to manage settings for that function."

In the drop down was a selection for "Scanner: HP LaserJet 3390 Scanner"

Also in the driver details of the "Scanner: HP LaserJet 3390 Scanner" there was the hpljbfig.dll. Yet it had the address of \Windows\System32\hpljbfig.dll.

I can copy htis DLL to the new system, but should it be in the System32 folder or the System32\Driver folder? And how does windows "see" it?

When I used other drivers like  HP Universal Printing PCL 6 (v6.5.0) I was not getting the twosided printing option.

This is the driver that I used on the previous (older) system. Yet on the older system under the "Manage your device" in Windows 10 that the  dialog box stated that
"This device has a few diferrent functions. Pick one to manage settings for that function." 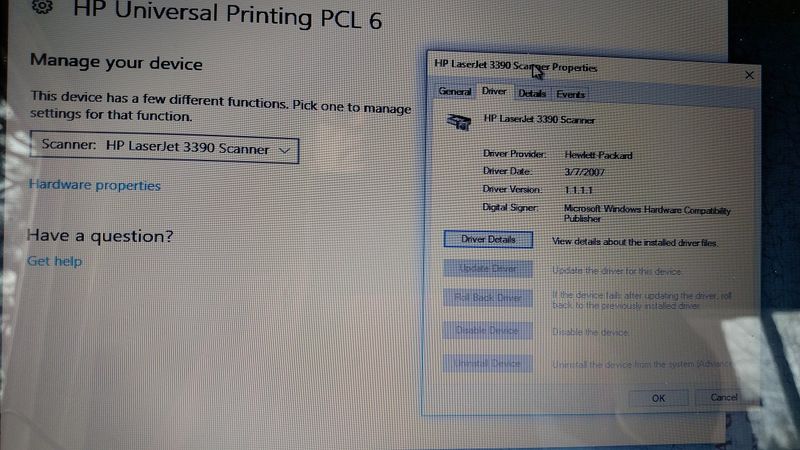 How can I get the Scanner Driver on the New system?

Here is the solution, freshly discovered and working.

Firtst thing: You can think that Windows x64 does not see Hp3390 scanner, but it detects it in a very weird way - as "HP Scan PnP Null" in "System Devices", yes yes, you can see it inside "System devices" (in device manager ofc.).

This driver ("HP Scan PnP Null") does not allow scanning, it is bad driver, but when You right-click it and update the driver from Windows Update - it will download proper driver of HP3390 Scanner, which will work and scanner will be properly placed in devices. From now on Printer HP3390/3392 will have normal menu for scanning in x64 operating system.

I discovered it after installing and cleaning up drivers of HP3390 many times. I've spotted 2 new unrecognised devices during installation of the printer, so after installation I've looked all devices and found this weird device "HP Scan PnP Null" and voila.

I didn't find this solution anywhere, so I decided to share it here. 🙂

There is second possibility of how Windows 10 x64 will detect the printer (ofc. wrongly without scaner):

- At first glance the printer is properly installed, but in device manager between USB devices search for "Universal USB Printer" (and most likely You will not find HP LaserJet 3390 there)

- right-click it and use automatic driver update - it will download from Windows Update new "HP LaserJet 3390" driver and the name will change to it. In the background it will also download and properly install "HP LaserJet 3390 Scanner".

Spoiler
Hi folks.  I have had the same problem.. and whereas now I can scan from the feeder, I still don't have the option of duplex scanning, or scanning from the scanner itself- options that were apparently available with the original factory driver CD.  Any suggestions from you smart tecchies?
0 Kudos
Qenozis
Level 1
2 2 0 3
Message 10 of 13
3,245
Flag Post

If You have option to choose between flat scanner and feeder, then You have correct driver, otherwise try to update the driver from Windows Update (go to device manager, find scanner in optical devices, rightclick the scanner and choose automatic driver update. I assume that You have left default settings to allow updating drivers from Windows Update enabled).

PS: Unfortunately even when I have option to choose between flat scanner and feeder, I dont have duplex scanning mode on feeder either. If I am correct, this printer's scanner never had duplex scanning.