Internal microphone not plugged in

Hi I bought a new HP envy x360 13 last week. I just noticed that the microphone is not being detected. The windows troubleshooter says its disconnected. There is a hardware button for it as well, which on the first day was working i.e i just pressed it and the light turned on. I didnt check if the microphone was actually working coz obviously, its a new laptop. Then i set up a dual boot Ubuntu and was setting it up when i realized that the microphone wasnt working. I put it down to Ubuntu drivers and moved on. but when i came back to windows, i realized its not working on windows anymore as well. Even the hardware button for the  mic doesnt seem to be doing anything. Any pointers to where i should be looking? I am coming from a mac so i dont have much idea about windows. 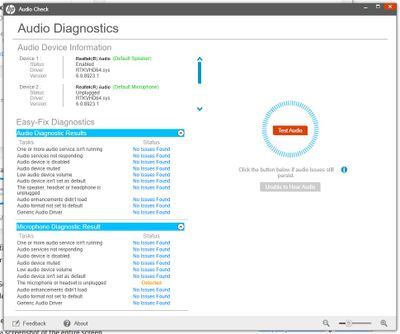 I had the same problem as of a few days ago (also with a new laptop) and the HP chat support helped me fix it.  I had to uninstall the AMD graphics driver and reinstall it.  I'm not super tech savvy so I can't recall all the steps but under device manager, under Display Adapters, you can uninstall the AMD Radeon(TM) graphics (make sure to click the uninstall driver button).  Then I re-installed the driver from this website - https://www.amd.com/en/support.  That fixed the problem for me.

I can confirm that this helped, i have the microphone visible now but the volume seems on the low side. This is on windows though, still no success on Ubuntu. But ill ask about that on an Ubuntu forum maybe. Thanks so much for the pointer @JP2426

Thank you!!! This solved it for me. I never would have suspected uninstalling/reinstalling the graphics driver would fix the microphone.