My HP14 laptop came with Intel Optane memory. I disabled it in Windows and there was nothing to disable in BIOS. I replaced it with a 256GB Samsung PM981a NVMe SSD, but it didn’t show in BIOS settings! Also, it showed an empty slot in RST UI and Win10 Optane App, but the crazy thing, it’s fully visible to Windows!  I was able to clone my system partitions (ESP, MSR, Windows, and Recovery) to it without any problems, but failed to boot from it.

My UEFI BIOS is updated to latest version F.58, and I have searched thru it with a magnifying glass, but there doesn’t seem to be any option to add a Windows boot manager entry or boot device for NVMe, or switch from RST to AHCI mode. But If I put Optane back in, it will be shown, as if it's manufactured to work with it only. By the way, I have used an identical Samsung NVMe drive in another HP laptop WITHOUT Optane, and it worked flawlessly

As a workaround and after a long and painful night of failed attempts, countless reboots and blue screens, I was finally able to run Windows from NVMe by booting it from the ESP on the HDD in a dual boot. It takes a few seconds longer than usual to boot but other than that, it works perfectly. I have completely uninstalled and deleted  ALL RST driver versions from both NVMe and HDD Windows device managers, but RST V.17.8.0.4414 still shows  in BIOS with only HDD visible, even though NVMe drive is there and working! 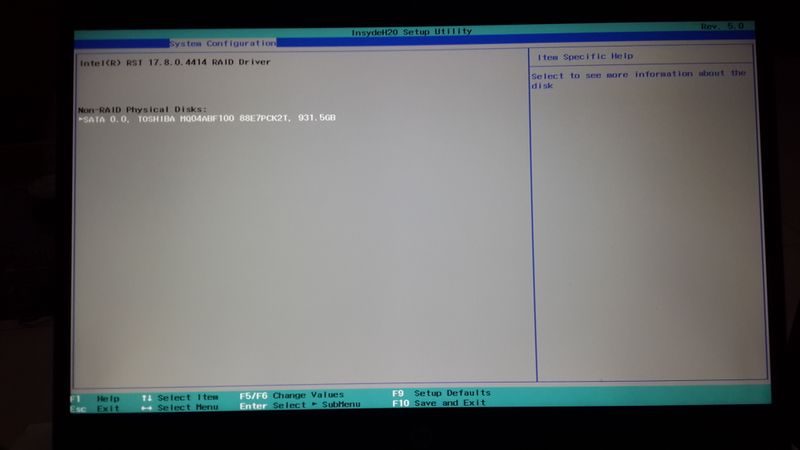 Is there any way to fix this? I.e. to make it boot directly from ESP on NVMe not HDD, since with this arrangement the NVMe drive will always be dependent on the HDD to boot? Some of my failed experiments to fix this included disconnecting HDD and installing Windows and Linux on NVMe hoping it will force it to boot, but nothing worked!

In my opinion, the only way to fully fix this is by updating the BIOS to another version from a similar pc which doesn’t have Optane. There is no chance in this lifetime or any other lifetime that I want to use this Optane crap again. I really wonder how a technology leader like Intel can make this garbage, and how top computer brand companies like HP and others put it in their machines and sell them to the public, when instead they could have for the same cost or just a little bit more put at least a 120GB SSD for Windows C: drive ! I found some good use for this Optane drive though, I put it in an NVMe-USB adapter, and it made a pretty fast USB drive 😁

I know there were other models from the same series which came with NVMe SSD  instead of Optane. How can I find them, and will it be possible to use their BIOS in my laptop?

Appreciate your answers and comments

I have done some digging, and found same series model cf0006nh has only NVMe SSD without HDD, but it has the exact same BIOS version and SP file! I have tried a BIOS rollback and update, but nothing changed. Any ideas how to completely get rid of this bloody Optane and remove its remnant RST driver from BIOS???

It's been three days, and no reply! 🤔

I'm wondering if nobody has anything to say, or if I picked the wrong time to post my question, when everyone is busy watching election news 😂