Brnad new out of box issue. All bluetooth devices have a lag to get moving after a few seconds of no use. I understand power saver after a few minutes. That is okay. Keyboard sometimes times has a huge string of same letter at beginning of typing. Devices are within one foot of computer  I have 2 other older spectre with no issues with exact same bluetooth mouse and keyboard. I click on the processes and run them as runtime priority and is better but not perfect. Built in keyboard and mouse no issues. I am fairly technical, updated all drivers, deleted and reinstalled. As one may know, without add on packages, runtime priority has to be set every time and with HID, Bluetooth and others, I can't determine which one may be helping a little. Happens whether plugged in or on battery. I turned off every sleep function I could find on everything possible in the Device manager.

I looked at Intel separate from HP and didn't see an driver updates.

You tried have done the basic troubleshooting as per the document and the notebook needs to checked taking remote access so that get to know it's a hardware or software issue?

Thank you. I thought I would get accustom to it but it is really annoying. I tried tech support when posting this but it said not available. I will try Monday. I wonder if it is the new IRIS and GPU. I was hesitant to go with the new Intel IRIS but it seemed to be only option if I wanted the latest Gen processor. Or a background process or something I don't even know at this point. I haven't installed many additional programs. It is almost same as out of box. Also additional monitor on HDMI port acts up some times. Task Manager shows me nothing I can catch running. I'll post here if tech support finds issue. It is constant and reproducible, so I imagine they will be able to find issue. Unless they say a bluetooth mouse and keyboard is unsupported and won't look into it. As I said, the exact same hardware works on a 2 year old Spectre and another desktop HP perfectly. So I think this proves it is not the bluetooth hardware I am using. I also have other bluetooth keyboards and mouse and same thing happens.

It appears to be related to Windows Bluetooth LE implementation in version 2004 and newer.  No one can yet figure out if it is a Windows, Intel,  or BIOS manifested issue.

You can try disabling Power Management features under USB Root Hubs and Thunderbolt in Device Manager.  It won't fix the issue , but it may lessen he amount of stutter/lag.

It is remarkably annoying that there isn't a fix for this yet.  Surely developers use BT mice on these modern devices and have noticed it.

I'm also have the same issues.  It doesn't happen every time but often.  If I don't use the mouse (Logitech MX Anywhere 2S) for a little bit, it can sometimes take a second or two until it starts responding.  Also my keyboard will seem to not respond if I press a key (Logitech MX Keys) and then I'll get multiple key presses on the screen.  I've tried disabling power management for USB Root Hubs, Bluetooth Low Energy GATT compliant HID device (under Human Interface Devices and not Bluetooth in Device Manager) , adding a registry entry under HKEY_LOCAL_MACHINE\SYSTEM\CurrentControlSet\Control\Power and adding a new DWORD value of "CsEnabled" and setting it to 0, and I downloaded the latest BT drivers from Intel and updated them.  I also contacted HP support via chat yesterday and the idiot on there was about as useful as a pair of gloves to a man with no hands.  His response was for me to connect my bluetooth headphones to my laptop and if they worked fine, there was no issue.  What a joke Afsar was.  BTW, I only experience this issue with my Envy x360, which I've had for about a week and three days now and not on my Spectre x360 which I've had since August.  I use the mouse and keyboard with both machines.  I'm trying to scour message boards looking for some answer but so far, I can't find anything definitive.

BTW, there are optional updates under windows update but I don't just want to install any of these because sometimes they could make things worse so I don't know if any of these could possibly help. 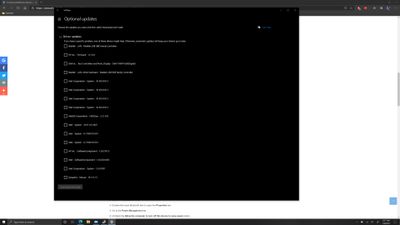 I'm considering to move to 1909 windows 10 version, someone has been tried this or facing issues with drivers for optane and all intel EVO platform drivers. For me, it's annoying to have this issue with a brand new laptop and I could blame Windows 10 for sure after all nightmare they created implementing all tracking user options into windows 10 2004

Try this.  This driver fixed my issue.  For some reason it doesn't show when using the Intel DL Manager.

Its the wifi card driver, not the BT one, but my stutters are gone.

I had hope that wifi driver could solve my issue, but lag still remains, I have warranty, do I need to send my laptop  back?

Frankly I don't think this is something that HP will cover under warranty but I could be wrong.  I know people online with other brands are expressing the same issue.  Someone else said they believe this issue only seems to affect the 11th gen models and I have to agree with that because I only experience this on my Envy x360 (11th gen) and not my Spectre x360 (10th gen).  I just don't know if this is an Intel issue or Microsoft (Windows) issue.