My patience with HP is now wearing a little thin. I don't feel that HP support are really taking this particularly seriously. I seem to be talking with first level support (case still open), who seem to operate on a weekly schedule, but this is out of their scope, so they've passed it onto 'second level' support, but all communication is getting relayed via first level support. I'm not convinced whether they're conveying the exact nature or significance of the problem.

"We have verified the situation with our colleagues from the engineering and we would like to escalate the situation so a proper BIOS version can be created. We would require a few data files from your unit."

Which I thought great! Finally they've investigated at the HP end, and confirmed the problem themselves. Great, finally a solution might be in sight. And on the evidence that I'm seeing, a 'proper' BIOS would probably be the expected resolution, so the comment re. the BIOS seemed great! My hopes were raised.

I'm not seeing anything that leads to believe there's any fundamental hardware problem - the fact it ran well with F28 BIOS - when I was able to revert to it - seemed to prove that. And reliably so when I switched back and forth from F28 to F31 and vice versa.

So I promptly rung them up to assist them obtaining the 'data files' they wanted. Given the nature of the problem, I had anticipated that they wanted some diagnostic logging related to the thermals, or diagnostic readings related to sensors, etc, so they could see the data that the BIOS was seeing.

Why would I think that?

Because the key question here is, - in my view - why does the BIOS feel the need to "POWER Limit Throttle"?

The key question that surely HP engineers should be trying to answer to fix this - I believe - is - what is the BIOS looking at that is causing it to bring into play the POWER Limit Throttling so frequently (in fact immediately any time the CPU is put under the slightest elevated load)?

That is what I thought the HP support engineer would want to be investigating.

Even if the BIOS isn't interpreting the inputs correctly, surely the HP engineer would want to see what inputs my BIOS is receiving so that they could then investigate why the BIOS doesn't appear to be interpreting or responding to them correctly.

That is what I thought they would want to be looking at when they asked to remotely connect to my computer.

But sadly, no. All the first line support engineer took (they asked me to email the files to them, so I could see exactly what the took, and I was watching the whole remote session while they obtained them) was just an inventory of the installed software and what processes were running, and static information related to driver versions, and IRQs, etc. I can't see any kind of diagnostic data in the logs they took related to the operating state of the system in relation to power management / thermals / etc, that might help answer the question "what is the BIOS seeing to cause it to restrict the TDP to around 10W with the POWER limit Throttling?"

I suppose I couldn't rule out an interplay with some other software HP factory installed - I already spent an age trying to figure out why my attempts to simply extend the time before power saving turned the screen off, kept getting undone ... it turned out that it was an intel utility (that I believe HP factory installed on the PC) which was overriding the normal windows settings for 'display off' and sleep.

So I guess I couldn't rule out some interplay between other drivers and the BIOS - though again, why doesn't (or rather didn't ) F28 BIOS have the same issue (when I was able to revert back to it).

This is getting really frustrating...

Here is a screenshot of my computer supposedly running on best performance ... all I did was refresh a YouTube page running in Google Chrome... the HP thermal profile is set to "Performance"... the processor was already below 2.2Ghz before I hit refresh - the moment it started to refresh... wham... the CPU frequency plummets further while the page is (slowly) re-loading ... it's several years ago since 0.79GHz was considered a 'high performance' CPU!

Maybe, just maybe, the HP second level support are genuinely onto the case, and have properly reproduced it and fully determined the root cause of the issue, and are currently actively working on a fix as a matter of priority and putting it through proper testing. (I'm a software engineer myself, I can understand why they wouldn't want to, and shouldn't, just rush out a quick untested fix, and I'd be fine with HP wanting to do this properly).

The problem here may just be lack of communication...

I can only speak for myself here, but if you could reassure us (your customers) that you're on top of the issue, and give a realistic estimate (that you will be able to keep to) as to when we could realistically expect a resolution, then I can be patient for a little bit longer (but I do have one eye on the clock in relation to the initial 6 month period under Consumer Rights regulations in the UK; other than this issue, I do like the PC, so if you can resolve this issue, I would much prefer to keep the computer - but if you can't resolve this issue, then sorry, it just isn't fit for purpose and I may yet feel I have no option but to fall back on the Consumer Rights regs... but I really would prefer not to!)

As it is, I'm sat here getting very frustrated with a PC that's not performing anywhere near the spec that it should be - I'm not able to get on with doing the productive work that I wanted to be getting on with (and paid the premium price to be able to do!). Instead I'm sat here writing this post.

The only notable attempt at a fix so far - BIOS F32 - doesn't seem to have made any difference. It's not filling me with confidence that HP technical team have yet fully identified the root cause.

In the Intel XTU - screenshot above - it reports the BIOS is manufactured by AMI.... do HP even have any control of this, or are they reliant on AMI to investigate and fix BIOS issues? Are HP just treading water and playing for time, hoping with fingers crossed that AMI happen to release a new BIOS? Or are HP actively working with AMI on this?

And this worked fine at high performance with the original F28 BIOS. 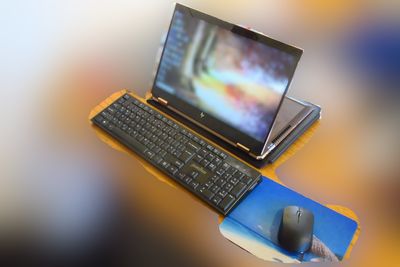 I think it speaks volumes that even though I hide the computer away every day when I go out (so I'm always putting it back in its case, and setting it back up again daily), for the past 3 months the thought didn't even cross my mind to try it in a different position to the above when setting it back up on the desk. Why would I, when it worked at high performance in that position when I first received it?

Now with BIOS F32, there isn't the option to push the built in keyboard out of the way and still get high performance. For high performance, I'm going to have to be using it like this.... which isn't satisfactory. 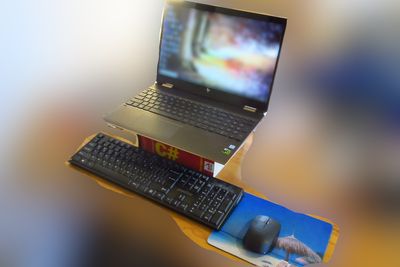 (To be fair, anyone reading this shouldn't infer this as a criticism of the built in keyboard on this model. It's very nice as built in keyboards go. And the fact it has a num-pad on it, was a factor in me choosing this HP over Dell's equivalent which doesn't have a num-pad. When using it away from home when I don't want the hassle of carrying around a separate keyboard, then the built in keyboard on this model is very nice. But a flat, built in keyboard, no matter how good, is never (in my view) going to be quite as productive as a proper, tilted, full size keyboard, which is why when at home, I really would like to be able to push it back out of the way when doing productive stuff - and on BIOS F28 I could!)

I hope HP find a solution as going backwards from F.31 to F.28 seems retrograde. The pc should not have the fan going when all I have open are the browswer to write this and Outlook.  Why when the pc is absolutly idling along would teh fan be required?