New Battery replacement not charging beyond 43%.

This is long only because I have painstakingly tried to provide as much relevant information as possible in the first post. I will really appreciate your help.

My battery life (for a 5-year-old battery) became very poor. A few days ago, my PC suddenly died on unplugging the AC power adapter, at a time when the battery should have been fully charged.

When I reconnected it and tried to boot up again, I got a message saying the system had determined that my battery could no longer hold a charge and needed to be replaced.

I assumed that was understandable and took out the battery for a few minutes to check for a part number, I then put it back into the PC and left it.

I was to shop for a new battery the next day, but first I had the idea of trying to check it again.

To my surprise, my battery had seemingly come alive, my PC got turned on with the old battery, albeit with only an hour of battery life on its full charge. I decided to get the new battery nonetheless.

I bought a spare at a trusted store in my city and replaced the old one.

However, even after 70 minutes of charging it in the store, the LED didn't go from orange to white (which would show a full charge).

The store staff booted it up, we saw it was at "40% available, Plugged In" and they shut it down and told me to continue charging it at home.

I did about 5 hours of charging without booting up, only to find it still not showing a red LED and not white.

I then booted it up a second time to investigate, and found only "43% available, Plugged In".

Without shutting down, I watched it for about an hour and it didn't change.

I did the "remove the battery and hold down the power button for one minute" trick. It did not change.

I then watched how fast the battery dropped and found it took an hour to drop from 40% to 23%.

I have since charged it, it got to 43% and stopped again.

Also, right now, I am typing this message without a battery in place, with my PC being powered solely by said power adapter, which I think is an index of the adapter's health (and possibly the charging port's too?).

About software updates, I have done the usual uninstall and reinstall of drivers. Also, I did install a windows update a few hours before the PC first died on me with the old battery.

I have heard that some people replace their system board due to battery issues and it doesn't fix their issue, usually. I'm scared of that. I would really be glad if it turned out to be that only the replacement battery is faulty or incompatible, but more importantly, I want a real solution to this whole problem, even if it costs me something.

I still have the old battery. Are there any checks I can do involving placing back the old battery and observing the PC's behaviour, to provide more information?

Please help me. Thanks in advance.

So let me summarize: you are using a nonstandard adapter, your battery was 5 years old. You replaced it with a new battery you bought at a store. It only charged to about 43% after many hours of charging.

Without seeing or knowing the part number of the adapter, or the maker of the battery you bought, it's hard to troubleshoot from here. I would say its unlikely there is any problem with the adapter other than it may not be the right specs for the laptop. Also the signs point toward this new battery. It is unlikely the motherboard charging is bad if it was able to add a charge to the battery, even if it stopped short of a full charge. If you can boot the laptop up with the battery in it, try running the battery check from HP Support Assistant. It may provide some information even about a non-HP battery. Privide the advanced results, please.

Thank you for responding!

I have replaced the old battery into the PC, charged it up, and ran BIOS on it, as well as the battery check. These are the results of the old battery and then the new battery. Unfortunately, I don't have the BIOS option to test my power adapter. I hope I have uploaded the images correctly.

And now for the new battery:

The new battery, plugged in.

So I had the idea of refreshing the diagnostics tool and this happened! It is now charged up to 43% (the problem point). 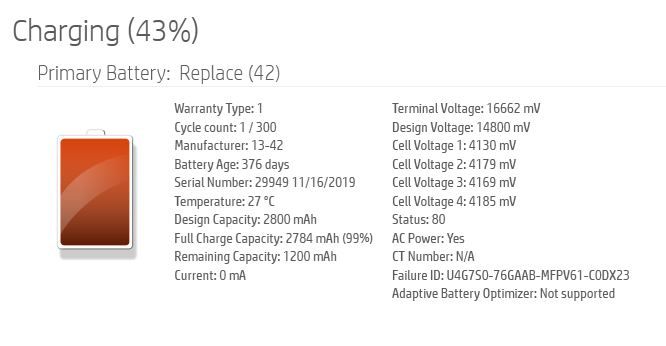 I refreshed the diagnostics tool for the new battery!

Its a new battery but has been on the shelf over a year. Needs calibration. I can't see the last picture yet. Will ask the censor to release it.

The last picture has yet different information. Can you see it now or is there something I need to do to enable you see it?

Also, calibration seems to involve charging up the battery to 100%, which is what I've been unable to do so far. It's somehow not going past the 40s. I turned it off and charged it up for another 4 hours and it's now on 45% (from 43%).

Seems self-explanatory. You bought a bad battery. Happens to me every once in a while. Most sellers will stand behind it.

I will activate my warranty and hope it all solves itself after.