I am having RAM memory issues with my HP Pavilion g6 1384 SA Notebook. Afew years ago I was advised to have the memory increased in anticipation of future software requirements. This I had done. HP data advised the maximum RAM memory the device was capable of was 6Gb. This I did. Recently the performance has become unusably slow.  Checking Computer Properties it shows "Installed memory (RAM):  6.00GB (2.00GB Usable).

I need advice and guidance on what to do to get maximum RAM from my Notebook?

After reading your post, I did go through the Product specifications of your product and found that your computer supports up to 8gb ram.
Refer to http://h10032.www1.hp.com/ctg/Manual/c03094322 4 Chapter 1 Product description

Further investigation showed that the  upgraded consisted of  a 4GB 1600MHz chip being added to an original 2GB 1333MHz chip.

Investigation  showed that although the Notebook was registering 6Gb of Ram it stated only 2Gb was useable? 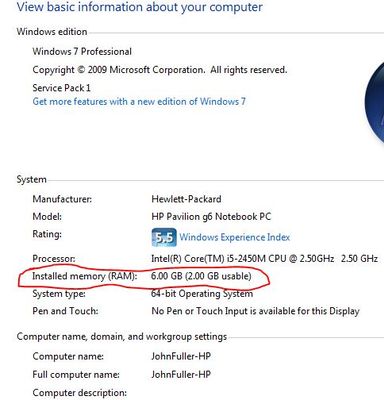 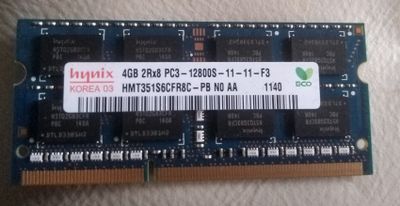 The initial advice was that there was a conflict between the two different frequency chips.

As a test both chips were removed and the 4Gb 1600MHz replaced in slot 0 and slot 1 left empty. 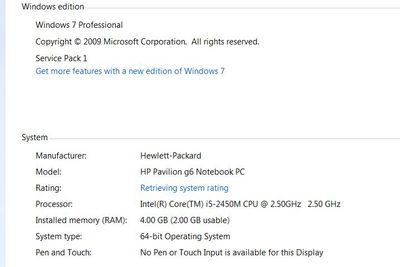 The Notebook recognised the 4Gb chip, but stated only 2Gb was useable? Notebook operated fine, the fastest it had for a long time.

Latest advice is that there may be a change in the BIOS required as memory may be diverted to support the Graphics Card?

I went to HP Support for my Notebook to check the BIOS and my Notebook reported the recommended F66, but I took opportunity to reload in case they were corrupt.  I then went through the Avised Driver list and loaded all. A couple reported File existing. Some it was difficult to tell if they loaded or not? At final shut down there was a very........very long delay as the Notebook Updated!

I also validated the OS Licence, all OK. Notebook was originally Windows 7 Premium but had been upgraded to Professional, HD replaced with 1Tb  SSD and RAM memory upgrade.

If I do need to modify the BIOS I have no idea how to!.

Current status is the Notebook is good no issues since swapping memory chips around, but still reporting 6.00Gb 2Gb useable). I have 50Gb+ BT Internet connection,  but Notebook frequently times out due to slow connection not suffered by any other device connected.

If I can sort the memory issue I will upgrade to 8Gb. Many thanks for that nougat!

Thanks for your input, but believe I have covered all the bases you have advised.  Would be grateful for any additional advice or tests to try.

I cannot believe I am the first to have this problem on such an old, but potentially adequate Notebook.

I appreciate your efforts to try and resolve the issue. I would request you to contact our Support and our Support Engineers should be able to Remote into your computer and sort this out. HP Support can be reached by clicking on the following link: www.hp.com/contacthp/

Thanks for you aid. After a very long weekend of trial and error and research I have a solution.

2) When Program appears in New Box above click on it. A new program window will appear.

I appreciate your efforts to try and resolve the issue. 👍 Please reach out again for any further assistance.

Have a nice day ahead.