Hi Paul. I've stumbled across this forum. I'm hoping I'm in the same situation as the original poster. I have an HP Spectre x360

(All specs taken from the machine system info, not internet)

So I can buy 2x 16 ram even though the guide states 2x8 ( assuming that model didn't come from the factory with 16 gb, hence the option is not in the manual). And I should buy 2666 MHz ? Can I buy any faster RAM 4000MHZ?  I've upgraded a handful of laptops and desktops in the past. So I'm comfortable with the process of installation, Just want to make sure I get the correct parts before I open anything up.

Sorry for all the questions. I'm getting a larger SSD and thought while its open upgrade the ram. Anyways I'm super hoping I can upgrade the model I purchased.  Any help would be amazing. And if the OP could let us know how the install went, that would be great as well.

I have the same question
3 REPLIES 3
Highlighted

Yes, your situation would be the same.

You can install 2 x 16 GB of memory in your notebook, and definitely get DDR4-2666 because your notebook's processor should run the memory at the full 2666 MHz speed and not bridge to 2400 MHz as it does with most of the Intel 8th gen processors.

Adding faster memory than 2666 MHz would only bridge to 2666 MHz, so no performance benefit would be derived.

The parts list for your notebook's product number shows a single 8 GB memory chip came with the unit.

Your notebook must have the Intel/Nvidia switchable graphics if you see two GPU's listed under the display adapters device manager category.

Switchable graphics were developed around 10 years ago to help conserve battery power.

Most of the time the PC will use the onboard Intel graphics to run basic applications such as web surfing, checking e-mails and whatnot, but if a heavy demand is placed on the Intel GPU it automatically switches to the more powerful Nvidia GPU for apps such as games and video editing.

See if you can get that kit part number cheaper, such as on Amazon.

Sometimes Crucial has the best price, sometimes not.

Ok, Awesome. When I get home tonight, Ill check out amazon ebay, etc since Crucial.com is out of stock Any other brands or is crucial kinda the GOTO with HP?  I really appreciate you explaining the MHZ 2400, 2666, 4000 etc. I was looking at more expensive ram that I would not have benefited from.

I purchased the HP refurbed from HP ( possibly why the machine says 2x4. gb). Any chance you could recommend a SSD for this machine, I've probably been looking at SSD's that I cant benefit from or do not quit need. It has 256 now. Does this machine have room for 2 SSD's or just the one? Id like to get close to 1tb without going to crazy$$$. I've recently past couple months been using adobe for some graphics stuff, and will start using premiere in the next 3-4 weeks. I was a console gamer, but have been using my Xbox live Ultimate pass more on the Spectre than I have the console. Long story short, while i could probably manage with my specs, the RAM and SSD seem like solid choices considering the use. I would have purchased more RAM and a larger SSD but I didn't intend on using it how I currently do.

Again, I really appreciate the help and all the info.

Yes, since the PC was refurbed, they may have put 2 x 4 GB in there which provide better performance than 1 x 8 GB, and then used that chip on a notebook where they installed 2 x 8 GB of memory.

Unfortunately, I can't recommend any other memory that that kit because I looked up the Crucial memory compatibility list for your notebook's model series and that is what came up.

No doubt there are other compatible kits from Kingston or other manufacturers, so you can see if you can find compatible memory from them.

Amazon has the Crucial kit for over $20 more than Crucial.

I did find a kit on NewEgg from one of their partner sellers, but I am not too keen on the seller's 69% positive feedback rating.

I believe that there is only one M.2 slot that supports NMMe drives.

Here are two Crucial 1 TB NVMe drives that are recommended as compatible for your notebook.

The P5 has faster read/write speeds than the P2.

Hopefully, Crucial has the one you want in stock. 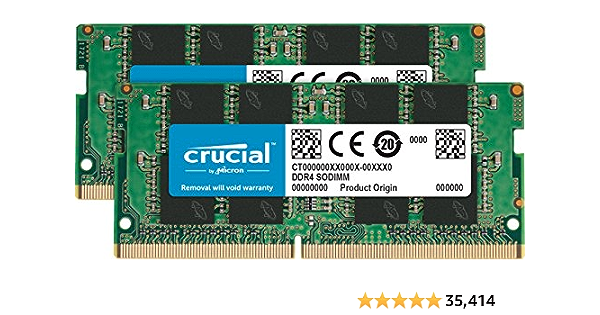