turn on suggested results
Auto-suggest helps you quickly narrow down your search results by suggesting possible matches as you type.
Showing results for
Search instead for
Did you mean:
Options
g2flyer
Level 1
5 4 1 0
Message 1 of 9
1,787
Flag Post

The pointing stick (trackpoint) of the ZBook 15 G5 i've just received is super-sensitive in detecting a click even when i just try to move the mouse. This in turn leads to all kind of accidental and unintentional actions (e.g., it cause accidental drag'n'drop of windows, folders and alike).

On my older 840 G2 (and windows 8.1) the synaptics driver had some related configuration. However, as far as i can tell the ZBook 15 G5 has alps hw & driver and that driver doesn't seem to have any visible configuration regarding the pointing stick, only the touchpad.

I like trackpoints and have used them for decades, initially on thinkpads and now on HP.  While the trackpoint on the 840 G2 was a step back from the thinkpads, it was still ok to use. However, the ZB 15 G5's click behaviour makes it almost unusable 😞

is there any way to disable the click/selection of the trackpoint or change the sensitivity?  Thanks for any help and pointers!

PS: According to HP Support Assistant (and softPaq) i do have latest version of alps driver as i do have latest firmware/bios or other drivers. also latest update for windows 10 (based on 1709)

BTW: to be able to scroll as with a wheel mouse would be great too but judging from https://h30434.www3.hp.com/t5/Notebook-Software-and-How-To-Questions/ZBook-15-G5-Scrolling-with-poin... there doesn't seem to be any option for this either?

Update: The Alps driver update (8.2206.1717.1013) which just showed up with HP Support Assistant solved my issue. By default (a) it seems to have disabled the click-on-point-stick and (b) scroll-mouse also works!  Exactly what i wanted 🙂   As i eventually discovered, it also added an configuration app:  AlpsAlpine TouchPad Settings Manager (note that afaik it is not  linked to the usual settings but you will have to invoke it separatedly, e.g., via WIN-S "AlpsAlpine .." ..

Hi, I had the same issue. I could not scroll with the middle button. I understand, that you solved this issue by installing the latest driver. I could not reproduce this.

There is no option for the middle button in the ALPS software (see screenshots), to enable scrolling.

How does it look for you? 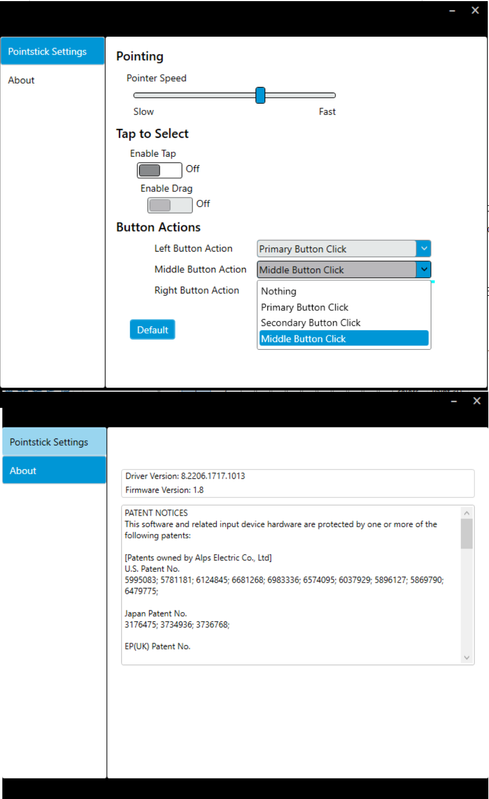 I didn't enable anything special for scroll mouse to work: all button actions are in their default position as it seems in your case. One difference i notice, though, is that i have an "Enable PointStick" selector above the "Pointing" and "pointing Speed slider" which i don't see in your screen shot. But then i guess the PointStick does work from what you say? Not sure whether it makes a difference but i also have the touchpad (and hence also the lower row of buttons) disabled.  Working scroll-mouse, though, might also depend on the particular applications? (e.g., for me it does work in chrome but does not work in gnu-emacs)

Thanks for your reply!

The pointing stick in general works (scrolling and "dead seconds", where it does not react for a short period of time every now and then, left aside)

My touchpad is disabled as well.

I got a new zbook 15 G5 last week. I am reinstalling the windows by myself. I found the Alps driver couldn't be installed correctly. It seems like the installation was crashed. I found the driver was installed, but I can't find the configuration application. Can you please show me where I can find the " AlpsAlpine TouchPad Settings Manager" as you mentioned. Thanks.

Thanks for your reply. I will try it this evening.

I found this utility. But I couldn't assign the middle key to scrolling.