Until a few days ago i was very happy with my Probook 470 G5. Im using Windows 10 Pro - Release 1909, it has a M.2 NVMe SSD with 8 GB RAM, Hybrid Graphics with Intel UHD 620 and GeForce 930 MX, latest BIOS.  But a few days ago, and all of a sudden, i do not recognize the device again. It is laggy like hell, Graphics are stuttery and sloppy, even these **bleep**ty AppGames from King are acting like on a SATA Notebook with a way too old graphic card.
The read/write performance of the SSD as well as the WLAN Connection is not affected, no performance issues here. But starting an App or a programm takes time. E.g. starting Firefox shows up a white page for 5-6 seconds before something happens on the screen.

There were no intentional changes to the System, the only thing i noticed is that Windows Update reported that Win10 Release 2004 is not yet compliant, but later i found out that the Connexant Audio seems to be a major issue for Release 2004.

So my guess is that Windows Update overrided some chipset or graphics systemdrivers, but i cannot find out which one is the problem.

I barely ran every available Hardware Check Utility from HP - no Problem found, did Long-Term-Memory Tests - no MEM Problem. The latest HP Support Assisant says there is no Problem or missig driver, and its integrated TuneUp Tool didn't change a thing either.

After fumbling around with Drivers on the Windows Devicemanager with no success, i decided to roll back to an image snapshot which i took on Win10-Release 1803, using an imaging tool. After rollback i brought the system back to release 1909 using explicitely the drivers that HP offers on the support page. But no matter what i do, Windows Update is overriding the drivers from HP.

It seems to be a strange combination with chipset and/or Onboard Graphics (Intel UHD 620), so also i tried the most recent drivers from Intel, disabled Intel UHD Graphics as well as the GeForce 930 ... also did not help at all. While checking the original Intel drivers, i stumbled accross the following Article from Intel:

I have a Core i5 8th Genaration Processor here, and an Intel UHD 620, but this Article describes almost all issues that i have.

So i take it for granted that there are issues with some Intel Graphics on Windows 10. Intel recommends to use HP drivers and i've installed the latest driver offered by HP, which is Version 26.20.100.7757 ... but shortly after that, Windows Update services comes across and overrides that with Version 27.20.100.8189

The latest stable graphics driver version according to Intel would be 27.20.100.8336

I'm absolutely clueless what else to do in orde to get rid of this nasty issue. I hate Microsoft for exchanging drivers without being asked, but thats the way it is and it seems we have to deal with it.

Does anyone have similar experiences an found a solution for it ? Im grateful for any hint that may help.

here's an update on this. In the meantime i've reimaged the system a second time, but on this trial i've disabled Microsofts Windows Update Driver Support by Grouppolicy to make sure that only HP verified drivers are in use.

But unfortunately, it did'nt change a thing. So my conclusion would be that this issue is not caused by drivers.

Finally, i've checked the performance of the CPU, and i've discovered that it is running constantly at ~400 MHz for some reason. 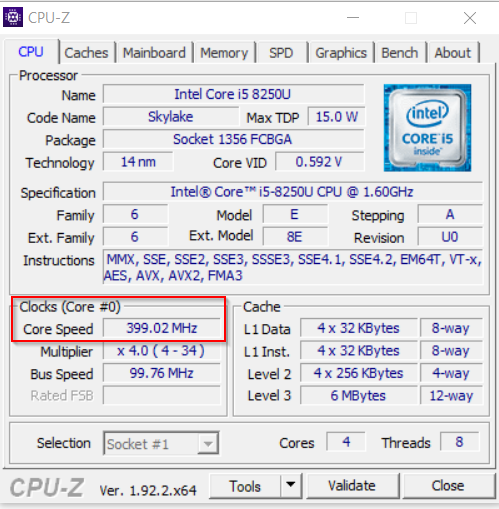 No Bechmark or whatsoever software is able to get it stressed higher that this. Turbo boost on BIOS is enabled, so that is not the cause.

It ought to me that this is a kind of Emergency-Throttle to save the CPU from overheating, but it is also active when the system just started and the CPU is at average temperature. So it may be that the BIOS is not able to read the fan speed any more or similar.

Besides that the "Intel Dynamic Platform an Thermal framework" may play a major role on that problem, as it is responsilble for thermal surveilance und intervention to protect the CPU. Actually there is the latest driver from the HP Support Website installed, so i guess it is a hardware issue with Mainboard and/or CPU.

Does anyone know a tool that can read the current system fan speeds ?

The BIOS gives me no information on that, also the HP PC Diagnostics App does not help here. It seems not to care about System Fan speeds and CPU Temperature, too bad ☹️

Last update on this:

Finally i found a solution which solved the problem. After Power-Reseting the system, the CPU is running at normal Speed again. CPU-Z is showing up Core Speeds up to 3 GHz again, the overall Performance is like i used to know it.