I recently got an HP Omen running Windows 10. I love it, but it has one problem. I'm a graphic designer who frequently uses Adobe Creative Suite and shortcuts like Ctrl+Alt+Shift+S. However, even if I have an Adobe program open, using that shortcut opens up a System Information window and doesn't do what it's supposed to do in Adobe. I'm quickly becoming frustrated with that.

I have searched these forums and it seems like the only solution anyone has found is to rename a SysInfo.exe file. The problem is, I can't find this file anywhere. I do have the see "Hidden items" box checked in Explorer. I also can't find a HP System Event folder, which is where many people said they found SysInfo.exe.

Places I have checked:

In the Start Menu, I was able to type in "System Information" and bring up a shortcut, right-click, and select Properties. Someone on the forum had previously found the solution was to remove "Shift-Ctrl-Alt-S" from the Shortcut key box of this window. But mine already says None. (see attached screenshot). 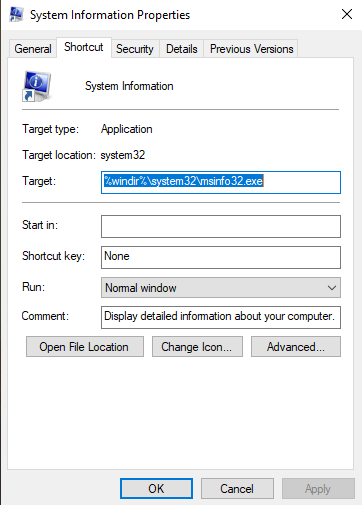 I don't know what to do at this point. Does anyone know where I can locate the SysInfo file, or better yet, turn off this shortcut some other way. (Really, HP? People have apparently been asking about this since at least 2015.)

And rename it to SysInfo2.exe and it should fix the issue.

Thank you for trying, but as I mentioned, there is no file path like that. The only folder I have called Hewlett-Packard is in Program Data (not Program Files), and it does not contain a HP System Event folder.

I know I need to rename the SysInfo file, but part of the problem is that I can't locate SysInfo anywhere.

The suggestions offered for this concern are not recommended by HP as the CTRL+ALT+Shift+S is designed to work only with the system information, and if the workaround isn't available or working, I'm afraid it's just the way it is, it cannot be changed.

You could, however, check with a local tech at your own discretion for further assistance with this issue.

The HP System Event Utility handles that shortcut/popup. I uninstalled it, which is probably not recommended by HP (please advise if I break any forum rules).

It is supposed to also control shortcuts for screen brightness and some HP special keys, but everything seems to work fine without it on my new Spectre x360 2019.

Please give a look at this solution and see if it works: https://h30434.www3.hp.com/t5/Notebook-Operating-System-and-Recovery/Pressing-ctrl-alt-s-opens-the-s...

Thank you, that actually helped me find the file path to the SysInfoEx.exe file. I can't rename it because I don't have permission, but hopefully I can figure that out. At least I finally found the darn thing! Thank you!