so today i tried to replace my wifi module with a new model that supports wifi 6, the AX201NGW from intel.

unfortunatly i noticed that the laptop won't turn on after the replacement.

when i re-insert the original wifi module(9560ngw) the laptop works fine again.

Here is also a compare between the 2 : Intel Compare

Does anyone know why this new wifi module is causing my laptop to stay off (blinking power-on button) ?? 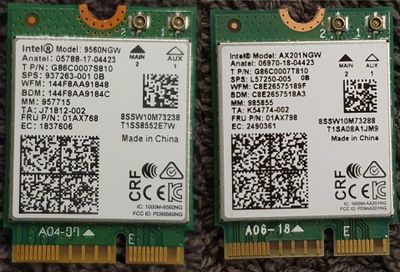 if that is the model you bought, if the notebook did not have a BIOS restriction, it should have worked.

I suggest you buy the specific AX200 card in the manual...

This seller will ship to Belgium.

There are only two reasons that I know of in which that would happen.

1. Your notebook has a BIOS whitelist which prevents the installation of any wifi card not listed in your notebook's service manual from working, and the card must have the HP part number on it, or it will not work.

HP does not release any info on what models do and don't have BIOS whitelists.

Normally models made in 2014 or later don't have them but some do.

2. You bought the vPro version of the card, and the only versions of the Intel cards that will work in consumer class notebooks are the non-vPro cards.

See chapter 3 of the service manual for the list of supported wifi cards with their HP part numbers...

Thank you for your answer! i have ordered the non-Vpro version here. can you see anything wrong there ?

if that is the model you bought, if the notebook did not have a BIOS restriction, it should have worked.

I suggest you buy the specific AX200 card in the manual...

This seller will ship to Belgium.

Oh Shoot, you are absolutely right! i will get the ax200!