It has been a while since anyone has replied. Simply ask a new question if you would like to start the discussion again.
JayAtMpd
Level 2
16 6 0 1
Message 1 of 12
37,319
Flag Post

I have too many post regarding search of LJ 5 driver for windows 10 64bit. but I have not found any solution yet. 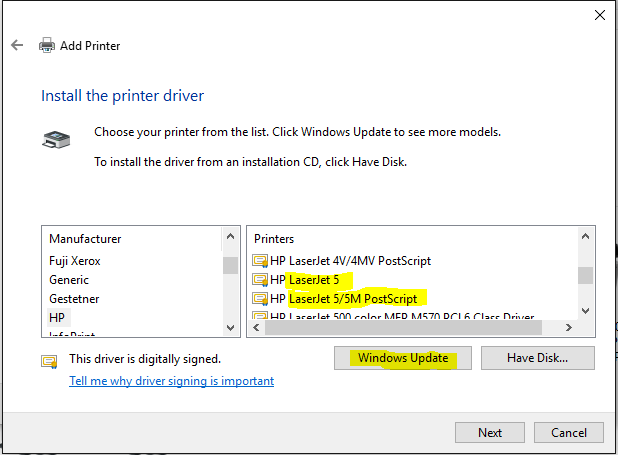 You may have to click the Windows Update button in the Add Printerdialogue, then wait (perhaps for several minutes) whilst additional drivers are downloaded, before the list is repopulated.

Of course, I have no idea if these drivers will work successfully, or if they will provide all of the features that you may want.

Thanks for your reply.

I tried that, was able to install the driver. however when I send a print job to it,  The print out have characters that is not recogniziable. It looks like something wrong with printer driver.

Also, I should mentioned that , my pc doesn't have paralel port so, I am using usb to paralel (Ieee) cable adapter. The driver for that is fine and correctly installed however the print out still have characters.

so, I am not sure what the problem is, I will try printing from windows XP to see if I have the same problem.

i.e. the print out is corrupted - presumably you are getting lots of odd symbols printed (posssibly only on the first line or two of every page).

Perhaps; but a more likely explanation is that the USB-to-parallel-port converter is corrupting the data - these converters are notoriously unreliable; if you search these forums, you may find recommendations for a particular cable which works with Windows 10.

I have Windows 10 installation. I need a printer driver for the HP Laserjet 5 Printer.  I tried the update and didn't see anything.

Laserjet 5 works fine from the XP,  is not recognized on Windows 10.

Yes, I did the same thing and the new updates still does not recognize the Laserjet 5.  It works fine on my XP system.

Today, I replaced my Win 7 with Win 10, and as others have reported the drivers for my older printer did not load.

Although it is a HP Laserjet 4 plus, that appars to be not so important, other than the fact that the original cable has been replaced with one with a USB connector for my more modern laptop.

After struggling and Googling for far too much time, here is what worked very well.

--press teh Windows icon in the lower left corner

--scroll down to "add a local printer"

--it is possible that if you are using the original cable that the default LPT1 is the correct choice.

--you may need to make that your default printer

Try HP LaserJet Pro CP 1525 PCL6 Class Driver. I did a search by ip address and that is the driver Windows 10 installed. It printed a test page. Hope this works for you.

In recent months Microsoft and HP must have apparrently removed/replaced the print driver for the network workhorse ... "HP LaserJet 5N".

We purchased our first three Windows 10 laptops in 2017 and early 2018.  During the process of adding this LaserJet 5n, the driver was not listed as an option when I went to install Windows 10.  But when I pressed the Windows Updates button, and waited a few minutes, the "HP LaserJet 5N" was part of the updated list.  And when entering a static IP, it created a handshake with the "HP LaserJet 5N", and installed the driver.  Our HP LaserJet 5N has a duplexer on it, which works fine on the first 3 laptops.

I recently purchased another 4th HP laptop and went through the same installation procedure.  At the point when I selected HP Laser 5N from the updated list of printers, it would not install the driver.  I contacted both HP and Microsoft (There English was pretty god), and after 2-3 days of continually trying everything they recommended, I was told that the "HP LaserJet 5N" was no longer supported and that there is no work around.

So I took the 4th laptop cak to Costco, where we purchased it.  This laptop was an x360 model, which has the screen flip around to the rear of the laptop and becomes a Windows 10 laptop.  Since the first 3 laptops continue to work perfectly on the network, thinking that maybe HP added some drivers or software for the flip screen that maybe was conflicting with the HP LaserJet 5N, I then purchased an simple, entry HP laptop from Costco yesterday.  I ran into similar failures on this laptop ... but it didn't make sense, since it was just a faster processor and larger hard drive that the three older units.  The only thing that I could think of today was that recent Windows uprades in the last few months must be using upgraded drivers that do not support older HP lasers using PCL.  So I went searching the Internet for the old universal driver.   The driver file is "upd-pcl5-x64-6.1.0.20062.exe",   I could not find it on HP's support site, so I did a search, and found several locations listing this universal driver set.  I found a site that didn't charge, but did plant a cookie ... which I will now have to elliminate.  BUT, IT WORKS!!!  I can't guarantee that it will work for you, but I suspect that it will work for several PCL printers "no longer supported".

Why MIcrosoft and HP did what they did, I can only surmise!  (Maybe prompting buers to replace a perfectly good workhorse with a much less reliable laser printer?)  ... But it must be costing the various manufacturers that are "refurbishing" returns like the x360 I took back yesterday!