HP Recommended
Product: SCX-3405F
Operating System: Microsoft Windows 10 (64-bit)
After upgrading to WIndows 10 version 1803, I can no longer use my Samsung SCX-3405F multifunction printer to scan and send faxes with Samsung software, while printing works regularly. The error that comes out to me is the following: "I / O error during communication with the device"; below the screen shot: 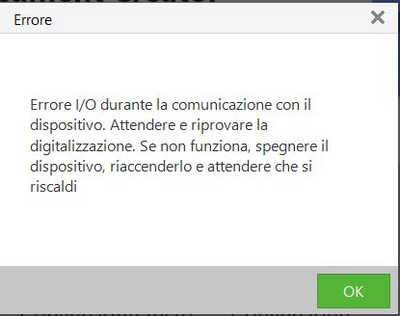 Needless to say, switching off and on again does not change anything and even waiting for it to heat up ...

I tried to uninstall and reinstall all the drivers, because an incorrect functioning of my multifunction had already happened to me after the previous updates of Windows and I always solved by reinstalling them. This time it did not work.

He also points out that the scanner works regularly with the Windows "Scanner" app and also with the "Windows Fax and Scan" program, but it no longer works with Samsung drivers and software. Only before the upgrade to Windows 10 version 1803 worked fine.

The Samsung Printer Diagnostics software says it is "Can not connect to the download server", then detects the following error: "The scanning software is not installed"; below the screen shot: 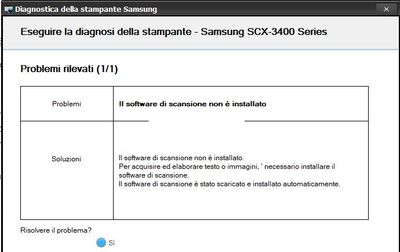 And if I say YES, it tells me again: "Can not connect to the download server".
Then the following error message comes out: "The scanning software (Samsung Easy Printer Manager) is not installed"; below the screen shot:

Yet I can not find Samsung Easy Printer Manager anywhere and I have not installed it.

I will try and help. The way i would have tried to solve the problem is to un install the drivers and remove all  entries in the registry file.Then i would install the previous driver that worked.Not sure this will help but maybe worth a try.

I am A certified Copier Technician.
It is so nice to give some help where possible and the forum is a great idea Thank You.Sometimes a picture speaks louder than words to find a solution.Should you find my help use full just give some credit for my effort please.
.Thank You.Copier-Pro
If you found this post helpful, you can let others know and also show your appreciation by clicking the “Accept as Solution”button, “Thumbs up" button!

How do I remove all  entries in the registry file?

Hi i am having the exact same issue and we have 3 of these printers not working now after the April 1803 updates. Let me know if you get a solution.

I tried to overcome the problem.
To scans I'm using the Windows "Scanner" app, if I need to scan a single page, and "NAPS2", if I have to scan multiple pages.
To fax, I have not yet searched for a replacement program.

I hope however an update will soon arrive.

I am having a similar problem. I have the updated Window 1803 update with a Samsung MultiExpress X4300XL (which I can't find on the support centre for HP). After the update and the abolishment of the homegroup option I had 5 computers that were no longer connected so I had to set up file sharing between them.

After spending a lot of time on this I found that the scanning option on our printer had also stop working. I have tried all the diagnostics, turned on the Windows Image Acquisition in services and contacted Microsoft who did remote access and could still not solve the problem (they were much better than HP as I can only contact a virtual assistant via live chat and these technical matters are very difficult to resolve over the phone). I can scan using the Samsung Easy Document Creator but this is a very long method compared to the one we had where we just scan and send via SMB to folders in our desktop. The error is a server connection error with the IP address but none of these details have changed and all of this worked in the previous versions of Windows where HomeGroup was set up. I can't find my scanner in the Samsung Print and Scan Doctor or the Windows Fax & Scan and Microsoft suggested that the cause is that a patch is required to upgrade the the drivers to be compatible with the new version of Windows.

HP really have to consider their duty to Samsung customers to resolve this issue as it is seriously affecting business with devices like this and I don't have time to revert all 5 computers to the previous version of Windows 10 after waiting hours for them to update and also spending hours fixing the HomeGroup problems.

Does anyone have any resolve for this? Or will we just have to wait for the update?

The solution is here:

Can you perhaps translate the solution from Italian into English

The HOTFIX win10_rs4_patch_adding_pcfax-fix (released by Samsung)
solved all the problems.

It can be downloaded from the following link:
http://org.downloadcenter.samsung.com/downloadfile/ContentsFile.aspx?CDSite=UNI_SEC&CttFileID=703966...

Thank you. It worked (not from the printer, but at least from the Easy Print Manager)