On advice by Scott, thank you for your reply, posting my question on the forum.

I'm a totally a noob, but ready to learn and understand. I purchased a Z800 with the c2 mobo, which will be delivered tomorrow.

What's is in the machine at delivery:

- NO OS (windows 7 pro 64 license included for self installing, as I want, and if necessary free upgrading to W10Pro)

What I want to add and configure:

- Soundcard (not decided which)

What do I need to know and in which order to make it all work perfectly?

Many, many thanks in advance. Can't wait to see the machine results.

Three things I'd do:

Add in a HP USB3 card, and run its spare cable from its header out front to an Akasa 5.25 to 3.5" interface for one of your spare 5.25" bays.  I've posted in here all the very specific part numbers and the Texas Instruments based card details (rather than the earlier NEC/Renasus HP card that you do not want).  Same drivers and chip were used in the Z620, so you can always find latest drivers from HP via that.  You get a free copy of Acronis from Kingston with your Predator.  I buy directly from Kingston for the 256 size one, but you may want larger.

This is a bit "old school" but I find it very handy to have an eSATA interface on the backplane.  In BIOS you can tune for eSATA on a few of the SATA ports, and most of my cloning and image capture is via external drives with eSATA interfaces.  It is a very handy way to jump onto the SATA bus.  I can post on my favorite quality adapters if you wish.

I'd also get a Kingston Predator M.2 card in their PCIe interface card.  That adds quite a bit of snap.  The Z800 like the Z400 and Z600 are still SATA II rather than SATA III workstations, so you can jump that hurdle for your boot/applications drive by using this way to get the speed of your PCIe bus.  I've posted in here on what Storage Controller driver to use..... that is the key breakthrough, and if you use the wrong one you will get a hard blue screen crash once you've moved through BIOS.  The right driver is the key, and I actually create the build on a similar sized SSD and load the correct Storage Controller driver onto that, and then use Acronis to clone from that over to the Predator.

I have tried a HP Z Turbo Drive G1 (AHCI controller, not the NVMe controller of the ZTD G2) in the Z600.... no go.  Kingston has the magic to pull this off.  The ZTDG1 works in the Z620 and Z640, the ZTDG2 works only in the Z640, and neither work in earlier generation HP workstations I've tried.

The Predator has a max of PCIe Gen II and needs 4 electrical lanes to go at its top speed.  It can also work great in a Z620, but the ZTD G1 can use PCIe Gen III and 8 electrical lanes of a Z620 (supposedly.... I cannot find HP confirmation of this yet).  I run that in the slot 4 of the Z620.

So, what PCIe slot to use for your KingPredM.2?  In the Z400 and Z600 I run it in slot 1.  In the xw6600 because only the two PCIe x16 video slots are PCIe Gen II I run it in the lower of the two video card slots.  That is a great solution unless you need to run two video cards in the xw6600.  For the Z800 I'd run it in the top slot 1, but there are other options available too.  It fits there at the top in slot 1 quite nicely. 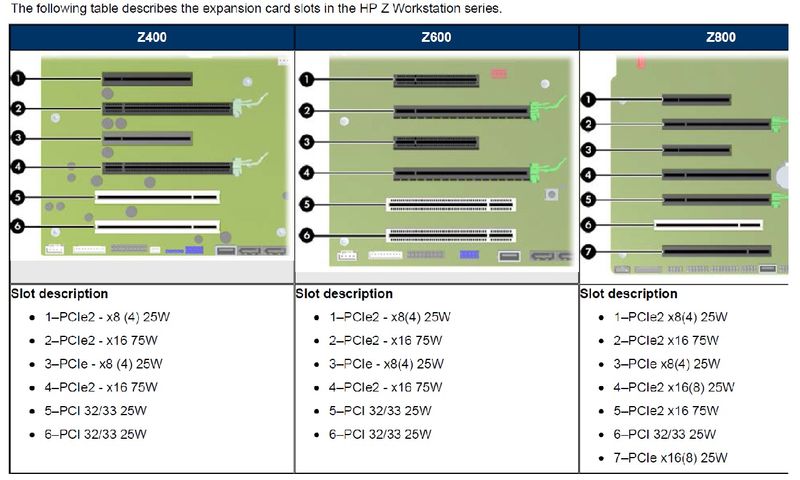 I guess a 4th idea is to have an internal SATA II SSD as your documents drive rather than an internal HDD.  Depends on how much data you need to store...... it is amazing how inexpensive larger used SATA II SSDs are, and they often have 97-100 percent of their usable life left when you probe them.

A 5th idea.... you can have multiple boot drives and one of my Z600s has a Kingston Predator M.2 PCIe card boot drive, with two alternative SSDs as boot drives, and that way I can easily experiment with W10/W7/and different major software platforms using one set of hardware.

Given that you have a version 2 of the Z800 you should get the latest service guide from HP for your workstation..... search on Google for 504632-004.  That is the part number of the manual you want.

Here is a PCIe slot guide from that: 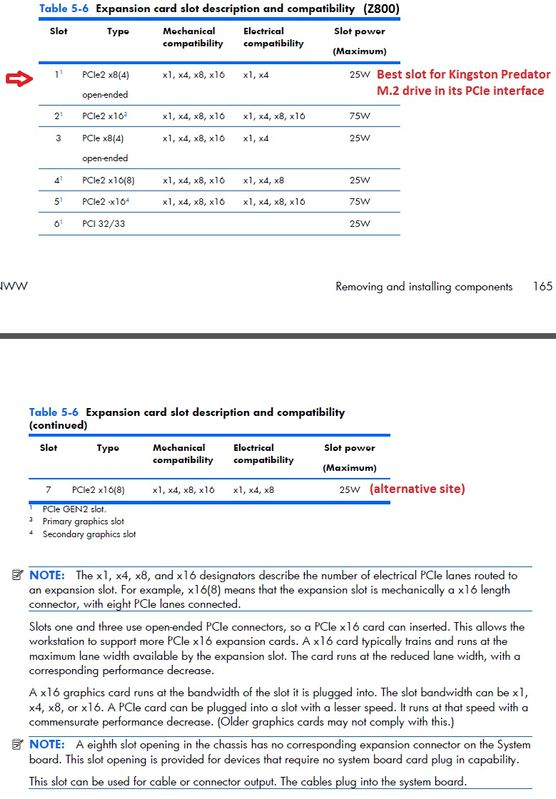 If you are getting that Z800 used be aware that the original owner may have altered the BIOS settings..... you may wish to set them back to factory settings.  The manual tells you how to do that.  From there you can fine tune them for faster boot speeds, etc.  If things are working fine you may want to just leave them alone.  You can learn about BIOS "replicated setup" so you can capture your BIOS settings and reload them or archive them as needed.

A thousand times thanks,

This is what I have learned and the steps I need to do as far as I have understood:

> SSD Samsung SM863 480GB in Akasa bracket
4 BIOS > All the correct settings, including for eSata.and the Kingston card. I do need help with the bios setting, do not want to screw this up.
5 W7 > USB Clean install on SSD
6 BIOS > Set SSD as boot
7 Install HP Drivers, especially 9.6.0.1014
8 Install GPU drivers
9 Full format Kingston GPT
10 Clone W7 image to eSata external drive
11 Clone W7 image to Kingston from eSata drive
12 Installing the rest of my SSD's/HDD's and quick format to GPT (all Sata)

> SSD in Akasha bracket will be used as a scratch disk

I wonder if there is a shortage of sata ports for alle the devices and have understood the possibility of using sas ports without headache, right?

I always relocated my temp and user folders, separating from the OS disk. What does your whisdom say?

HP Recommended
I thought SATA 3 SSD devices were backwards compatible with SATA 2.....I Read an another post that the z800 only reckonized SATA 2 to my understamdimg front the topic "Z800 problem cpu leds"

I'm Thinking to use the Icydock dual SSD metal bracket for the 3.5 Bay. Does anyone know if this is alligned with the backplane SATA connector? If SATA 3 is working on SATA 2 connector then I would like to place 4 SSD with 2 of this brackets (bay 0 and Bay 1). Bracket raid function on jbod and put the 4 SSD as raid striped in the bios. All advise and opinions greatly welcome.
Was this reply helpful? Yes No

I use a Kingston 2.5" to 3.5" SSD & SATA Drive Converter for the system disc in the and that one fits in the Z800. AFAIK it has been discontinued but i found it here: https://www.kingstonmemoryshop.co.uk/kingston-ssd-2-5-inch-to-3-5-inch-sata-carrier-enclosure-drive-...

Do you have link to the Icydock bracket? Since it contains two discs at least one of them wont align with the backplane SATA connector in the Z800. I kept sevaral SSD´s on the inside, on the top of the DVD writer and in the very top of the chassis. I also bougt one HP 2-in-1 Carrier - storage drive carrier: https://www.cdw.com/shop/products/HP-2-in-1-Carrier-storage-drive-carrier-caddy/3694491.aspx

The HP 2-in-1 Carrier - storage drive carrier is expensive but it did fit in my Z440 were it sits today so i still use it.

HP Recommended
Thanks Roger, for ketting my heart beat again. SATA is no issue then.

Here is the Icydock link

Would be Nice if its fit. There is An archived topic before but never continued, see

HP Recommended
Ritindra, I think the Icydock you linked to will fit perfect in the Z800. 🙂
Was this reply helpful? Yes No

Holy cow what have I gotten myself into, just reading this forum post makes my head hurt this seems so complicated but really cool at the same time

I got almost all my hardware and want to install everything tomorrow.

Just now I wanted to download the drivers from the HP support page and don't know which drivers/firmware/hp software etc to download, could you be so polite to enlighten me what to download?

As for installing the pcie cards, what would be the best slot?

What need to be installed, my guess: