I need to know which of the following motherboards are either v1, v2 or v3 and which one supports faster E5 v2 or E5 v3 processors?

can anyone please clarify?

the bios bootblock date is what determines cpu model compatibility

the bios bootblock date is what determines cpu model compatibility

No, it is much more complex than that.  The way to get a v2 motherboard is to ignore the "PCB REV" number printed on the motherboard above the special bar code label, as DGroves said.  The key info from BIOS is to see what boot block date is listed via BIOS.  The 2013 one means you have a v2 motherboard.  The 2011 one means you have a v1 motherboard.  Here is a dogmatic statement:  You never ever will be able to update a v1 to a v2 on the same motherboard (unless you are a microsoldering EEPROM-reflashing genius, which none of us are).  Even if I was it would be better to just know what is presented in this post with the attached PDFs below. 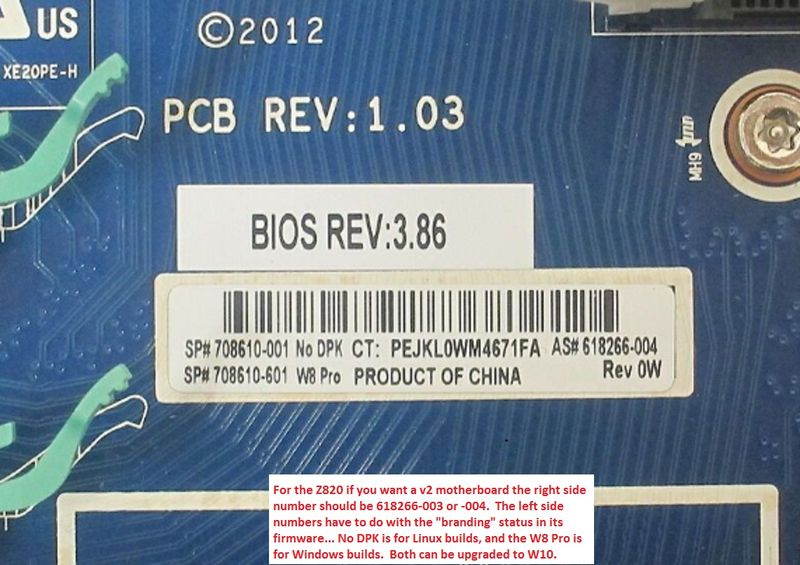 How many eBay Z820 motherboard sellers will have a picture of the BIOS first page showing the boot block date to send along with a used Z820 motherboard?  Never seen that.  How often will you see a motherboard being sold intact with a V2 Xeon still installed from the original build?  Very rare, but I have seen that. If it came from HP with 1 or 2 v2 Xeons installed it surely is a v2 motherboard.  How many Z820 motherboards are shown on eBay with a legible central motherboard bar code label showing?  Quite often, and you even could ask the seller to send you that pic if they did not include that, or tell them exactly what you need to have related to that bar code label.  That tips your hand, however... but do communicate to the seller that you want only the one shown in the ad, based on its bar code label.  I have seen innocent mixups happen and a v2 was shown but a v1 was sent.  Avoid that hassle.

I've attached a few PDFs below and in the converted .txt one there is a lot of info, plus a link at the bottom of that that is still live with much added info if you want it.  Of interest, there was hope by HP that the ZX20 v1 workstations would be able to accept the not-yet-released v2 Xeon processors (that is from a ZX20-release press conference in Europe by the top dog from HP USA workstation division).  That did not work out.  However, there is no such v3 vs v4 Xeon motherboard issue with the ZX40 generation of HP workstations.  All the early ones can run both the v3 and v4 HP-approved processors.

Finally, branding:  When a brand new "virgin" motherboard is shipped from HP it will be unbranded.  The branding process generally is done by a HP field service engineer and is based on codes that are on labels on the outside of your HP workstation.  Properly entering those will result in a motherboard that matches what came to you from the factory with your workstation (except the motherboard UUID).  I have done the branding process on a couple of virgin Z620 motherboards... it is not easy.  Those will run fine as virgins too, but will not be recognized by your HP Restore disc set.

Usually you will not know the branding of an eBay used HP motherboard.... unless it has the rare little "Replace with..." label giving you the Spares P/N info to correlate with the PDF decoder info below.  See attached:

as far as restore disks, that's somewhat of a moot point for most people since win 7 is no longer a actively supported OS and win 10 was never offered on the z820 by HP so no win 10 HP restore disks exist

You would think so on the Linux vs Windows branding, but I've gotten a surprising number of Linux branded Z620  v2 motherboards.  Maybe that is because the Linux ones for some reason are being parted out more, and maybe same for Z820.

Regarding value of the W7Pro64 HP Restore disc sets.... I'm still converting v1 Z620s to v2 via the motherboard upgrade pathway.  I get a v2 Windows-branded Z620 motherboard from eBay, load it quick and easily from the HP Restore discs to W7Pro64, and then immediately convert on up to W10.  Free W10Pro64 licensing still exists this way.  I'm sure same would work for the Z820.

For those who don't know... the W10Pro64 upgrade process remains free for any W7Pro64 build, and includes a step whereby the UUID of the motherboard gets auto-registered on the MS W10 licensing servers.  From that time on it is quite easy to clone builds from one same-type HP Z workstation to another same-type one, and also to reload clean W10 builds without needing to look up your license codes.  Because the UUID comes from the motherboard you need to do this step with every bricked MB or upgrade MB project when using a motherboard bought used from eBay.  Hence, I'm keeping my HP Restore disc sets safe and sound, partly also to prove I'm legal if ever needed.

I have HP Z820 with following motherboards:

Agree.... 1 and 2 can easily be upgraded from v1 to v2 processors.  Now comes the question of what versions of the v2 processor(s) you will choose.

The upgrade of 3,4, and 5 would include swapping in a v2 motherboard that you now know how to identify.  The Z820 has more room in the case so it actually is easier to upgrade its motherboard than a Z620.  Since all the other parts can be reused it is a pretty inexpensive upgrade overall, and fairly easy.  Roughly a 45 minute job after you've done the first.

Thanks for your valued time and suggestions 🙂

I'm looking for the best possible v2 Processors and open to suggestions.

I will be looking out for motherboards to swap.

Once again, thanks for your time, you're credit to HP Community.

Thank you, and many others helped me.  Passing on the favor.  I miss our favorite HP engineer Dan_WGBU.  He may have helped us too much!

The best choices for upgrading to Xeon v2 processors will be based on what you plan to do with these workstations.  Our forum friends Bambi from the US, Brian from Great Britain, and DGroves also from the US will be the best sources for that issue and hopefully they will chime in.

Find the very latest Z820 QuickSpecs you can ( FOR EXAMPLE  ) and look at the processors listen on pages 3-4.  You'll want a processor running at 1866 (and matching 1866 memory).  You'd want a QPI speed of 8.0.  That gives you 11 to pick from.  All those 11 are v2 processors with dual QPI links (needed to run 2 of them simultaneously).  Lots of cache is nice.... even better is lots of cash.  Nothing that money can't fix... but it is amazing the discount time gives you on these.  It helps that the processors and memory to match were used in a large number of servers that have been retired.  Supply is up, and demand is down.

DGroves will know at what level you need to step up to a significantly higher cooling capacity heatsink solution.