i have a verry irritating issues with my HPz800

problem is if i use more than 2 ram slots on CPU 1 and more than 1 on cpu0 the system freezes up with 2 cpu's installed!

when i install only CPU 0 with all RAM ports filled the system boots up FINE (24gb ECC) IF i fill all slots up on both cpu;s with BOTH cpu's intalled i got ALLOT of ram issues! is there a way to fix this? im realy getting sick of this HP z800, i even swapped the cpu;s with 4 other xeon cpú's spares i have around no luck what so ever i also swapped with another HP z800 mainboard dit solve the problem either, i also shecked the sockets for bend pins with a powerful lamp and magnefied glass

1.  From the fist page in BIOS what is your boot block date?

3.  Is it ECC buffered or ECC unbuffered? 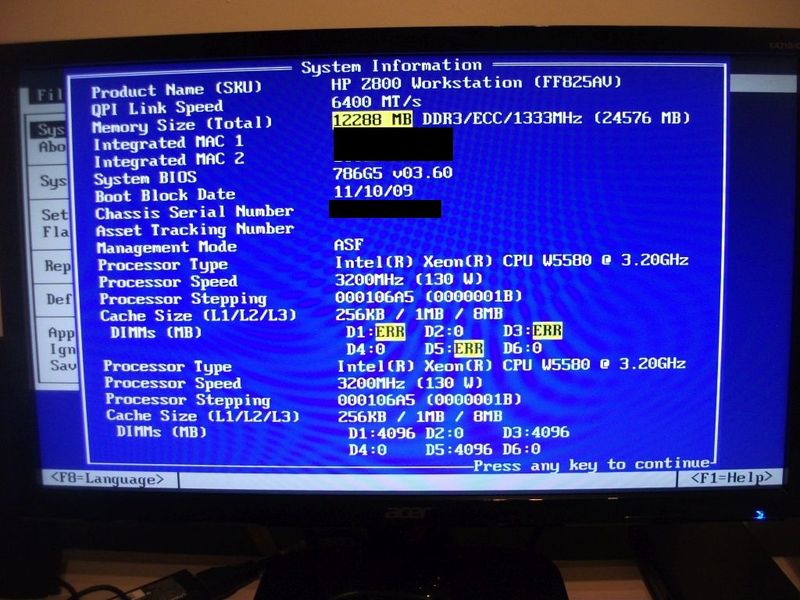 about brand is sheck later today, they all do have a HP sticker on it

The reason I asked about your boot block date is that the earlier version ran on ECC unbuffered RAM.  Your version 2 should be able to run on both buffered and unbuffered RAM, both ECC.  Of interest, the Z600 and Z800 can run with the ECC buffered sticks I have (like yours), but the Z400 cannot.... all these are version 2 workstations.  The earlier boot block date for the version 1 Z800 is 1/30/09.

What you have as your RAM from the codes should work with both processors, from all I can see.

The workstations can be picky about memory sticks, but it sounds like yours are all identical.

yea sure what are those offical part numbers??

Here those are..... these will get you the HP images in eBay and from those you can dig around and look for the exact OEM's code, and find identical ones (including HP holographic sticker ones) that way too.

You can't mix buffered with unbuffered.  These all are ECC plus unbuffered.  The first number if more than one is what is on the stick's label.  The ideal is to fill all slots with identical RAM.  Generally you can mix different OEM ones if they have the same HP sticker number.  A few of the 4GB numbers are for identical HP RAM that was for servers.  I've used all of the 1, 2 and 4GB numbers below.

Added tips:  In the version 1 of the Z600 (and I'll assume also the Z800) only ECC unbuffered sticks were supported.  Then came the version 1 to version 2 motherboard roll, and the details (for the Z600) are presented related to memory types and the fact that only the version 2 supported buffered ECC sticks.  Same is true with the Z800 v2.  The PDF link is  HERE:

You have the version 2 Z800, and that PDF is worth reading.

Here's an added screen capture from another HP PDF of the DDR memory QuickSpecs, and this is for the version 2 workstations:

btw i found this picture

That illustration is for the Z600 which has a total of 6 memory sockets and which can only use 3 of the 6 if only one processor is present.  Do not use that diagram.  Yours has 12 total sockets, as you know.  The Z800 memory controller and load order is more complex than with the Z600.  Look at the engineer's blog post linked below, the lower diagram, for load order for a dual processor Z800.

One tip..... look closely on the motherboard for the name of each memory socket.  The physical name on the motherboard and in BIOS does not necessarily match the order of plugging them in.  Just physically match the Z800 load order diagram for whether you are testing with 1 or with 2 processors and you'll have that correct.  See pages 161 and 162 of the tech manual below, and note you fill the brown sockets first in both cases.

There also is added Z800 info from a AutoDesk engineer  HERE:

Finally, please let us know what the final issues were.

thanks for the info i keep it in mind, just gota wait til saterday and see what they wil do with my rig