So I installed a 22 in 1 card reader in a media bay and I had to screw it in.  the media bay I had to use a screen. I thought these were tooless? Also, I have been looking for the motherboard diagram for the z420 so I know where to plug the card reader in. it comes with a USB 2 and firewire port as well.

The media card readers from HP came in many versions, and the later ones came with USB 3 as their output but with a USB 3-to-USB-2 adapter.  The card reader, as you know, is a 3.5" form factor.  HP shipped a very nice "toolless" that in fact did not need a screwdriver with some of the media card readers, but not all.  Did you get yours straight from HP in an unopened box?

Many of the media card readers from eBay have been separated from the nice 5.25-to-3.5" form factor adapter from HP.  I do know the "toolless" adapter's part number.... let me know if you want a picture of that and the part number(s) to search for.  I got a stash of these at $15.00 each including the media card reader and use that adapter for different projects that require a 3.5" device.  That is as low a cost as I've ever seen over the years, so expect to pay more.

The adapter requires 4 M3 shouldered round Torx screws to be present, 2 on each side.  Then it slides into the desired 5.25" bay without use of tools, and clicks into place.  HP quality.... A+.

I got these on ebay from link of other users here to order.  for the media holder is this.

The card reader is this.

Most HP workstation motherboards do not have a native USB3 type plug built in to allow use of that type of USB3 plug end so without the adapter that one is worthless to most of us.  There is the "2x2" PCIe HP USB3 card that has two ports on its backplane and one of these USB3 headers.

And, there are ones in between that came with a USB2 plug on the end of the cord.

Here is an image of that adapter... best quality... 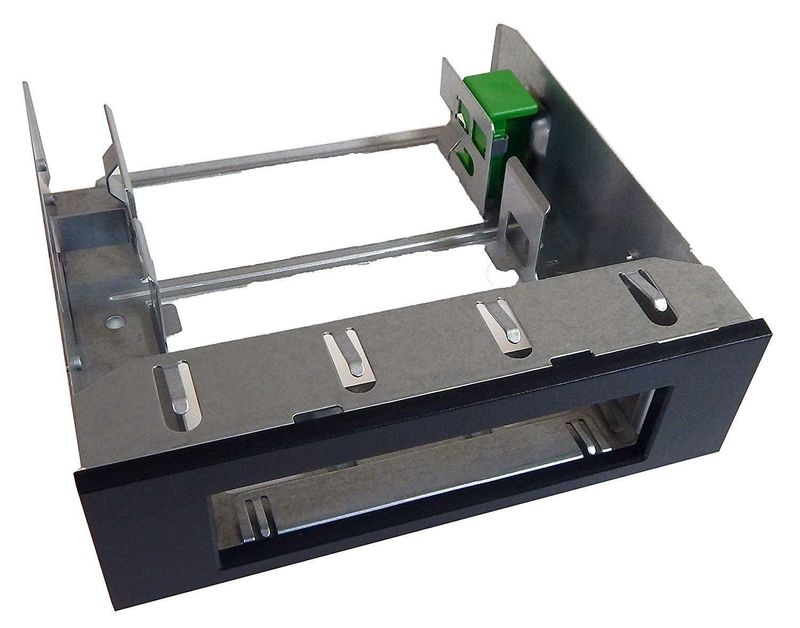 HP support told me the 22 in one would work too.  I just have to find the spot on the motherboard to connect the media reader. My z420 is a recycled workstation and that is why I want to upgrade to parts that work and know what it needs to be mounted. 😉

OK, now I get what you are going for.  Here is your HP media card reader, and it has the capability of providing In/Out data transfer both by USB2 and FireWire (1394):

Below will be some pictures showing the two cables coming out of the reader..... USB2 and 1394.  I394 has kind of gone into history with the speeds of USB3.  I'm going to tell you what I would do and then answer your questions.

I personally would junk that media card reader and keep your very high quality 3.5 to 5.25 adapter.  I'd instead buy one of the HP media card readers I mentioned that has native USB3 output (I can get you the part number if you want that).  I would buy one of the HP "2x2" cards that uses the same Texas Instruments chipset as the Z420 motherboard does (all the ZX20 workstations use that same chip on motherboard).  I have posted in here all about that card which is excellent.  I would mount that card in the proper PCIe slot and feed the USB3 cable from the USB3 HP media card reader to the on-card "motherboard type" socket.  That way your card reader will have I/O performance way above USB2.  You already have a 1394 port on the front and rear of that workstation.

Now, if you want to keep what you have and live with USB2 speeds:  You can detach the current front 1394 cable and use the Media Card Reader's 1394 cable and attach it to the 1394 motherboard header.  That is on the bottom edge, second in from the rear.  See motherboard diagram below.

For the USB2 cable just plug it into one of the 3 internal USB headers.  They all are the same and each has a missing pin on one side that corresponds to the filled hole on the black plug at the end of the cable.  It thus can only go on one orientation.  That filled hole is called a "blank".

Here are some liinks to generic HP media card install and the manual for your workstation: 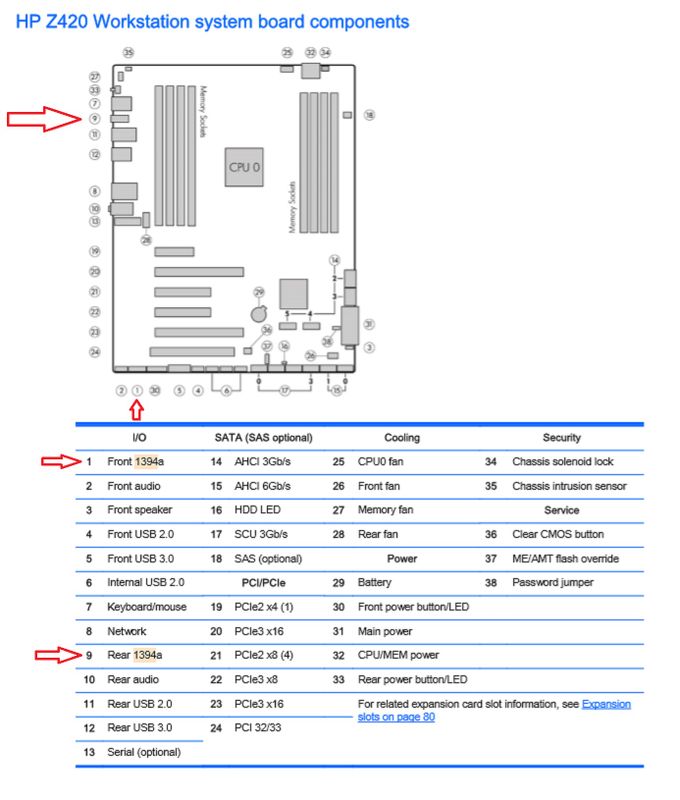 Some added pics of your card reader: 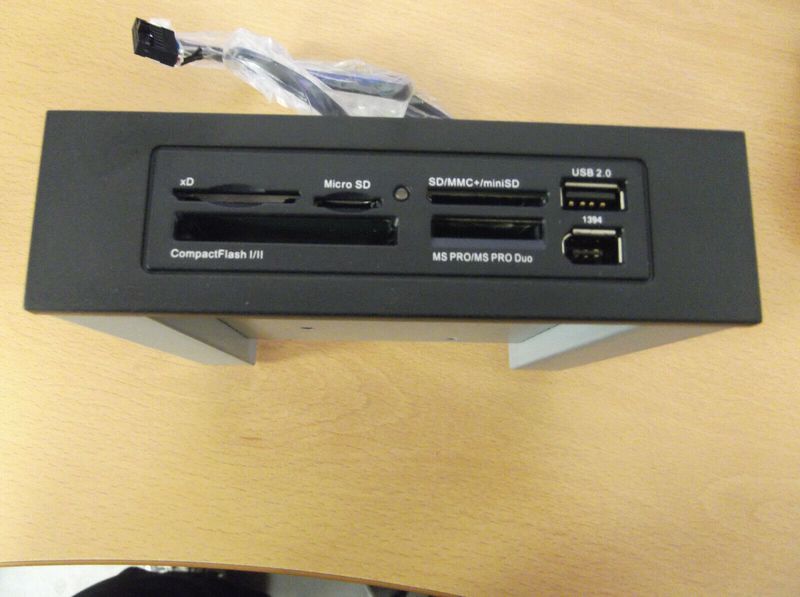 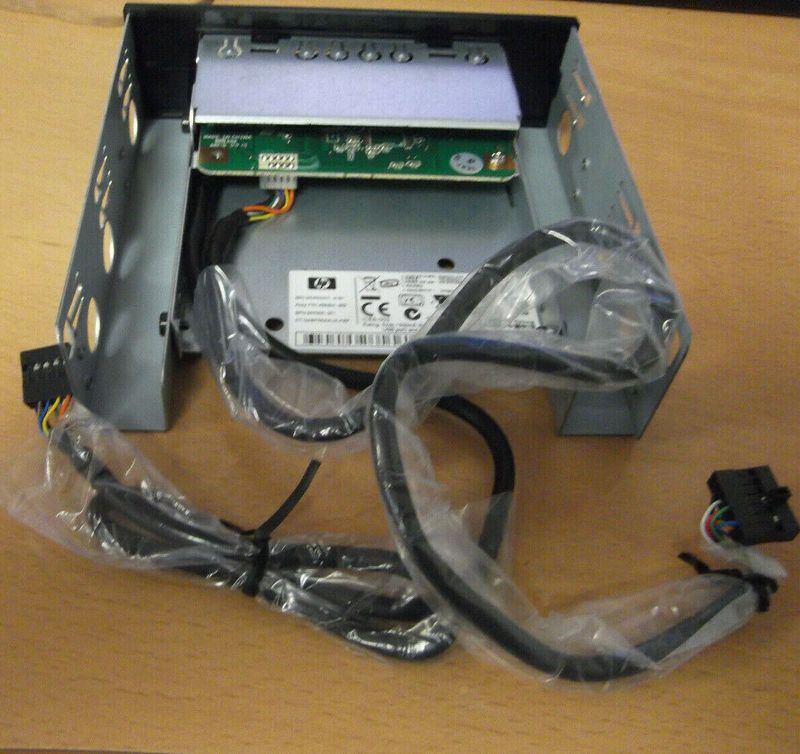 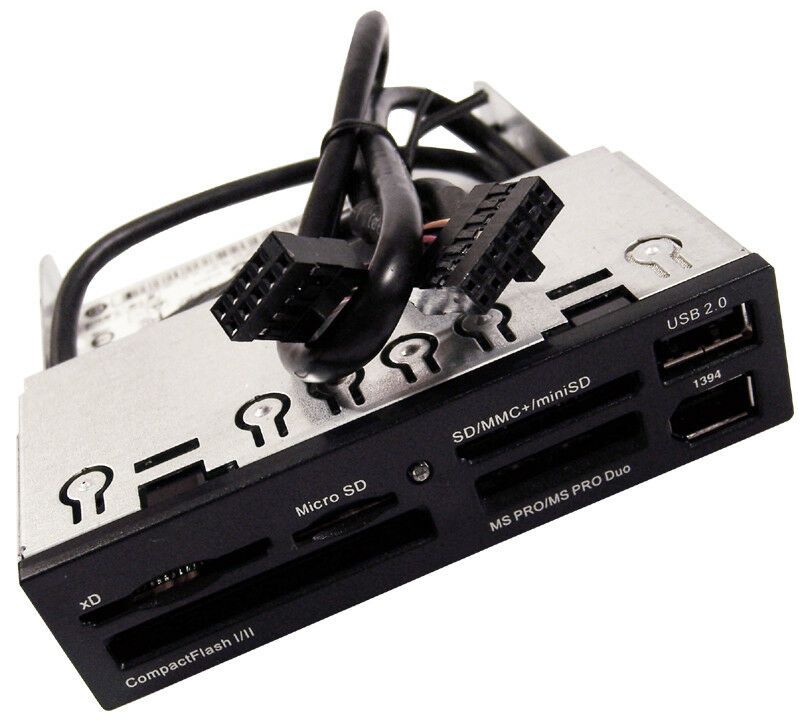 Finally, here is a picture of the excellent USB3 card from HP/Texas Instruments: 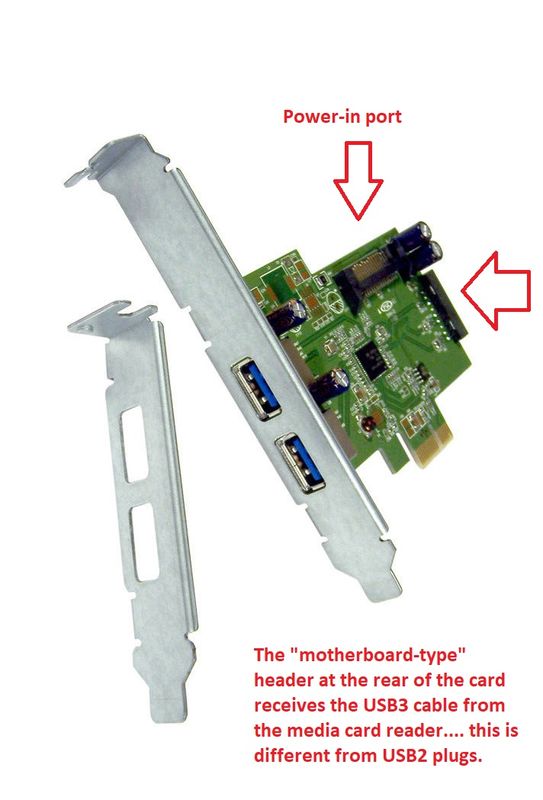 Thanks. I will have a look inside and see what I can do. The chord does not seem that long but then again I just have the drive in there just for looks at the moment. lol, Thank you for all your help.

A little added info about speeds, and I'll go dig out one of my HP USB3 readers and its USB3 to USB2 adapters to add in a few more pics.  When you understand the speed differences you'll see why USB3 truly is the way to go unless you almost never use the card reader.

So, faster USB3 via the card I mention is worth thinking about, and the drivers for it are the same as for your internal USB3 on the Z420's motherboard.  As a result of using the same TI chipset the drivers for the motherboard also drive the card, and this incluses auto-install with a W10Pro64 installation..