It has been a while since anyone has replied. Simply ask a new question if you would like to start the discussion again.
Highlighted
Yimiki
Level 1
5 3 0 1
Message 1 of 5
2,122
Flag Post

I've bought a new HP Omen 17 (running on Windows 10) about a year ago. It's been working like a charm, but lately, it's been acting a bit weird.

I have it on a heightened platform (the heat can get out just fine), with another keyboard in front. Sometimes during typing, I notice that the keys are randomly either:

- Being unresponsive until pressed multiple times; I'd have to hit "E" 3 times for the letter to appear

- Being typed in continuously after pressing the key; hitting "E" once types "EEEEEEEEEEEEEEEEEEE" and keeps going

I've tested this both with the Omen's keyboard (without the other one plugged in) and with the plug-in keyboard. It still happens. I have no idea what is causing it. The only change I've made recently is that second keyboard. The strangest thing is that both keyboards seem fine upon startup, but when I leave them alone for a while, or after a long period of typing, it starts to act up until I restart the computer (then it usually stops. Sometimes it persists through the restart, though, leading to me not being able to type in my password.)

Would this be solved by simply re-installing the keyboard drivers? Or should I try something else?

Thank you very much in advance! If you need any more details, I'll try my best to provide.

You say this happens no matter if you use the built in keyboard or the usb keyboard?

If you know how to go into the Device Manager and delete the HID Keyboard Devices, Yes you can do that.

Then go down to Universal Serial Bus controllers and delete any greyed out USB Composite Devices also.

Reboot the laptop and give it a minute to reinstall the drivers when it opens.

Dont connect/install the usb keyboard until you test the built in keyboard first.

Also go to the Search Bar and type Turn on easy access keys and hit Enter.

Make sure the main check boxes are all unticked, like this... 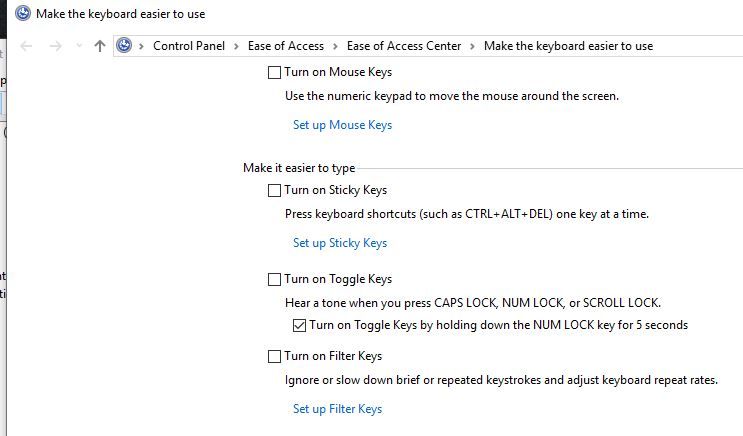 Thank you very much! I'll give it a try as soon as I'm home and let you know.

That does seem to have helped! I haven't tested it extensively yet, but so far it seems back to normal. Thank you very much!

Made me wonder what caused it, though. There were a bunch of keyboards listed under keyboard devices even though I only use two - maybe that was causing confusion?

Thank you very much either way - I can type normally again! =D

Several keyboards together might have been conflicting in some way.

Good to know its working now.