I've had this problem since first using my laptop which is the HP Spectre x360 with Radeon Vega M GL graphics. While playing a game Windows OS comes up with a blue screen, starts collecting data then reboots. The error code is VIDEO_TDR_FAILURE (ATIKMPAG.SYS) which I understand is an issue with an AMD graphics driver.

Also while playing games such as DRL the game runs very poorly the screen is constantly freezing then catching up with itself even at 1920 x 1080 resolution and it isn't even fully utilising the CPU or GPU so there is no reason the game should be lagging as I have a laptop from 2014 that can run the game just fine with the same vram and an older CPU. The GPU even delays on playback of video content.

I hoped that downloading driver updates would help but it hasn't.

If anyone has any suggestions on how to stop the error code  VIDEO_TDR_FAILURE (ATIKMPAG.SYS)  that would be great.

I reviewed your post and I understand that the computer is freezing, and you are getting an error when you play games.

The computer that you have is not designed for gaming. However, I recommend you update the BIOS and the graphics driver from the below link and check if it helps.

I updated the BIOS and the AMD drivers but the Intel driver gave me this message! I'm guessing I should keep the new newer driver i already have? 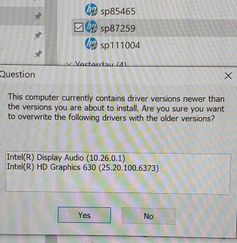 Help me with your region (Country) in a private message and I will share the contact information.

I am also facing same problem, If you found any solution please let me know! Thanks in Advance

Hi I haven't found a solution yet. Please let me know if you have any luck.