White solution/ Paste/ Dust on the fans from the back of the laptop?

I have a Hp omen laptop dc 1011nq with 32 GB RAM, i7 8 serie and RTX 2070 for 11 months. The laptop is fantastic but for some weeks maybe 2-3 months I see that sometimes after I use it that over the fans from the back of the laptop it is some sort of white paste / soution/ thing/ dust ( I do not know exactly what it is). When I play solid games I use a oxid 250 cooler because I feel that the laptop it heats alot when I play on ultra graphics. Do you know what exactly is that thing? Now I cleaned it, but i will take a photo next time when I'll see that thing if it helps. Also how I clean correctly the fans from the backside and from the rear side of the laptop? Some tips and tricks? If you need serial number tell me and I'll copy paste here.

Click here to see this video in full screen on YouTube to reduce Heat Inside the Laptop to Prevent Overheating, alternatively, you can Click here for step by step instructions.

Also, to resolve issues such as Fan is Noisy and Spins Constantly:

I will read this days about it and I will check. When everything will be ok I'll mark the answer.

Yes, you can try these steps at your leisure and let me know how it goes.

So everything is ok, vents are cleared. The temperature is aroud 90-95 for CPU while I'm playing games like GTA 5 online, LOL on ultra settings and GPU I think around 60-70. I know this are normal values for ultra graphics so I'm not afraid. I don't have fps drops, I have around 240 fps on LOL. What I want to fix now is that after some updates(windows or drivers) I had this problem. In LOL or Gta online after around 15 minutes of first game my screen goes black, no video signal, only sound ( I can hear it). I press the power button to shut down the laptop, wait 10 seconds, turn on again and after this the problem seems to be ok. I don't figure out what cause this everytime.... All windows updates are up to date, GPU/CPU/BIOs drivers are all up to date( GPU from nvidia panel- gaming drivers, CPU/Bios from hp assistant).After a windows update the pc entered automatically in repair mode, something was not good with that microsoft update, but I don't know which one because the laptop made 3 system updates in once( I hate windows 10 for this crap, now Ubuntu seems to be more stable than windows lol). And about the white thing on the vents I forgot to make a photo, now it does not appear in the same quantity, but I still can see a little bit of this white thing on the back fans, it look like a thermal paste, not dust ( I cealr the vents with compressed air).

I used hp diagnostics tool for a quick scan of my laptop and everytest was past. On stressed test for CPU he was on 54 degrees celsius in the conditions that stress test put all cores in 100%, so i think everything is fine with it, only what i had wrote up in this comment make me worry

Could you send a picture of the vents, with the thing that looks like thermal paste as it should be on the vents, also?

Meanwhile:- create a new user account and check if that works better, here are the steps:- Click here

@Sandytechy20 For some time I don't see the white thing, I see the dust from the plastic and I am not sure if on the plastic net is it dust too ( i think yes I put the photo in attach). I clear the vents with compressed air 1 time a week. This photo was taken before the cleaning.

As for the new user, a new windows user will not make my issue to disappear, it is something bad with a driver or a windows update, but I can't figure out whichone. A new windows user will have the same drivers, the same updates, so the same issues. This issue starts after a nvidia update+ windows update on the same day, aroud 1-4 of May If I remember the date correctly. Every test from HP diagnosis tool were Passed so I don't figure where to search to find what is messing up. Now I am with all updates up to date and drivers and still the issue exists. Bios is up to date too. 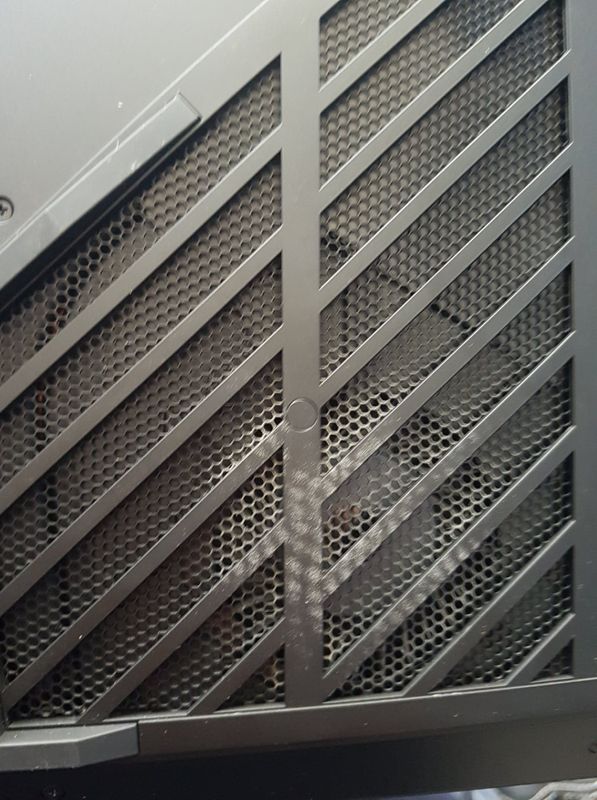