turn on suggested results
Auto-suggest helps you quickly narrow down your search results by suggesting possible matches as you type.
Showing results for
Search instead for
Did you mean:
Options
Scott_Chicago
New member
5 4 0 0
Message 1 of 8
285
Flag Post

Hooked up my old workhorse, HP Laserjet 5100 and surprisingly it was found with plug n play.

Tried a test page and machine gave an error to clear jam - to open and close front panel.

Did that then it printed out a blank page that only reads:

Followed tutorial on this board:

Rebooted system, then turned on HP 5100.

Went to universal driver (shows in my list of printers) and clicked test print, got error printer not there.

Any suggestions? Does this work with windows 10 or am I wasting my time trying to make it happen??

There was a post on here recently  and what someone found worked with another older printer was to change the print processor in the driver from RAW to NT EMF (see photo below, as you can see there are several print processors to chose from so you may need to try a couple of options to find the most compatible one.) 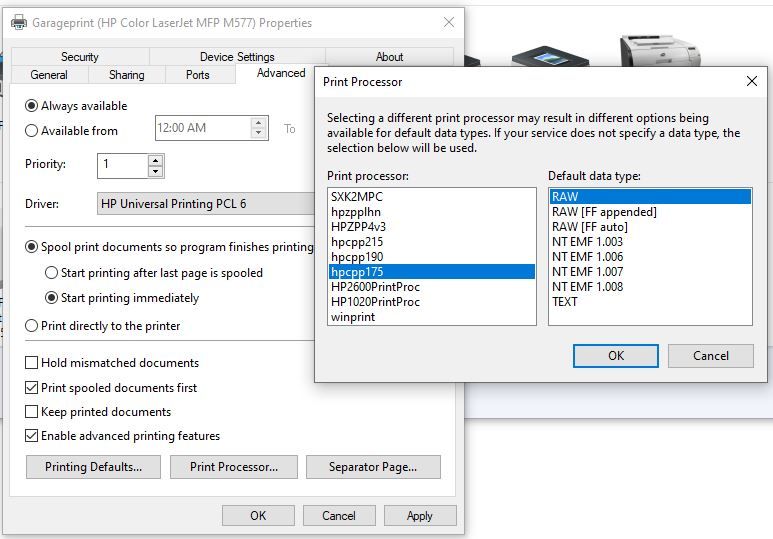 If you find the information provided useful or solves your problems, help other users find the solution easier by giving kudos and marking my post as an accepted solution.
Reply
0 Kudos
Scott_Chicago
New member
5 4 0 0
Message 3 of 8
224
Flag Post

Thanks for the help. Unfortunately I tried changing processors and nothing happened. I do remember having this same problem on a laptop running windows 7 and never had it resolved. It ran fine with XP though.

Have you tried an older UPD driver or the PCL 5 driver? I have some archived ones I can post up on Dropbox if you want to try.

If you find the information provided useful or solves your problems, help other users find the solution easier by giving kudos and marking my post as an accepted solution.
Reply
1 Kudo
Scott_Chicago
New member
5 4 0 0
Message 5 of 8
207
Flag Post

Since I've read someone solved this by using an older PCL 5 driver while the 6 didn't work I'll give that try, thx.

Hello again Repairatrooper, can you send me the PCL 5 driver please? not sure where to get it...thanks!

Thank you! It worked! Had to use the older PCL 5 drivers to get it to print.