I have just bought a HP Pavilion 15 n-278sa laptop. It comes with a single 3.5mm port which is used for both audio out and line in.

The laptop will work fine when outputting sound through the jack and a pair of headphones. However when i try to use the same port as a line in to record sound from an external device i am having some problems. I am trying to connect my mixer to the laptop using a standard lead, red & white one end and 3.5mm jack on the other.

At first I was not getting any change whatsoever under the Recording tab in Sound settings. It just says 'not plugged in' under the microphone. After doing some research I found that the lead I was using, a 3 section plug, would not work and that was the reason there was no change when i plugged it in.

I bought a 4 section plug & eureka, the laptop recognised the lead & showed this on the Recording tab. I thought my problem was sorted but this was not the case at all.

As soon as I plug the red & white end of the lead into the output on the mixer, the laptop screen displays the 'not plugged in' message again as though I have unplugged the lead at the 3.5mm jack end.

This makes no sense to me whatsoever?!? How can it recognise the lead is plugged in with no problems but then go back to not recognising it as soon as the other end is plugged into an external output?!

Surely there must be a way of rectifying this as currently its impossible to record any sound on the laptop from an external device, in this case, my mixer.

The main reason I bought this laptop is so I can record the mixes I do. It is literally of no use to me with this problem. I had no issues with this on my old laptop as it had separate 3.5mm jacks for input & output.

Please can someone advise me of a way around this problem.

I would like to take a moment and thank you for using the forum, it is a great place to find answers. For you to have the best experience in the HP forum, I would like to direct your attention to the HP Forums Guide First Time Here? Learn How to Post and More.

I understand you are trying to connect your mixer to the notebook. After connecting  the appropriate adapter  it was showing correctly. Once you connected the mixer it disappeared.

Here is a link to YouTube, which has  a selection of videos on connecting a mixer to a notebook or laptop, that may assist you.YouTube /connect mixer to laptop

As it was seen correctly before you connected the mixer, the notebook is working correctly. You will need to contact the manufacturer of the mixer for instructions on connecting it to a notebook with one input/output port.

I've got a similar problem.  I have just got a new Pavillion 15-p004na which has got the 'combination' jack port.  I previously had a Pavillion Dv-6 which sadly failed.  This had separate microphone and speaker audio jack ports.  I successfully ran a cassette tape deck into the Dv-6 and was able to record tapes as MP3 files using Audacity software.

When I connect the same tape deck to the Pavillion 15 I get the 'you have plugged a device into the audio jack' message on the task bar but no signal is apparently received by the laptop.  I have checked the Control Panel>Sound Settings - see this screen shot: 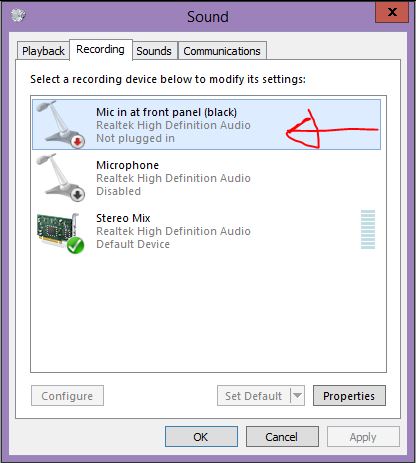 You will see that the -Mic in- says "Not plugged in" even tho' a jack (2 section) is in the socket.  I have had no problems inserting a speaker jack (3 section) into the combined audio jack and listening to sound from the laptop.  The other microphone is disabled to prevent recording of un-wanted 'room' sound.

I'm very disappointed that my expensive new laptop won't do what my old one did 'out of the box'.

Thanks in advance for any help you can give,

Thank you for your query, I will do my best to assist you.

I grasp that you are trying to connect a tape deck to your notebook.  Your tape deck has 2 cables and your notebook has a combination jack,  When you connected one cable into the combo jack  it did not install.

You will need to look at obtaining a special cable that will allow you to connect the 2 cables on one end and one connection to your notebook.  I suggest inquiring at a retail store if this will work or not, but I believe it will.  Here is a link to a document on cables that may be a guide for you.

Everything you were afraid to ask about Cables  by TweakHeadz Lab.

I hope this helps

Thanks for your reply and the link to the article about cables.   Maybe a 3 section jack plug would work but, to solve the problem, I took a slightly different approach which probably gives me better quality recordings than using the microphone jack.  I have purchased a USB sound connector unit (an "Audio Grabber").   This works well and I have made some reasonable quality recordings from old (30+ years) cassette tapes.

Same problem here with my NEW x2-k010nr. I just sent it back to HP to see if they can figure out their own product with Microsoft glut ware. I think both companies could not find their butt with both handsl  I have not heard from HP since I sent the pc back to them to solve the  problem. DO NOT WASTE YOUR TIME. This is the worst experience I have had with any pc.

Ham123 ps: the only answer is for both these companies to go bankrupt!!!!

Been there done that; same problem with my NEW ,x2-k010nr, laptop. After screwing around for days with HP, India etc.

I sent it back to HP custom care service and hope to hear from them in my life time. Do not waste you life with these two corp's the only thing they understand is bankruptcy!! Send your pc back as soon as possible and put pressure on these two dumb corp's until they are bankrupt! Sorry to say that is the way to solve the problem.

I am having the same problem, just i am using a microphone and headset with a combo jack. i get the same error i have made my own forum posts but no reply yet so i thought i would go around posting on other forums just to get someone in the staff team to get onto fixing this problem. i have already waited 3 weeks to receive my combo jack in the mail im not waiting any longer. even funnier is that the support team told me to buy this exact combo jack and said plug and play do your thing guess they were wrong

HP Recommended
I too have the same problem which has been very frustrating. I am trying to record on the laptop from a mixer using a RCA (red and white) cable to 3.5mm jack into the dual headphone/line in port on the right side panel of my brand new HP Pavillion. I bought this laptop for the sole purpose of recording my turntable sessions and I am very very dissatisfied. I too cannot get the recording tab in the sound settings section of windows 8 control panel to recognise my mixer. It says that it's not plugged in and I haven't got it to go further than that. Please tell me there is a way to get this working easily.
Was this reply helpful? Yes No