When attempting to boot, the computer either gives a black screen or what appears to be memory corruption (possibly of VRAM, randomly colored pixels throughout the screen). Occasionally, I'll be able to get it to boot to Manjaro KDE (my OS), around 1 time in 30 or 40. However, when using the operating system, the problem will return, with the screen becoming corrupted/shifted and all input freezing. The BIOS is inaccessible most of the time, with the screen becoming corrupted or the Caps Lock key flashing before it can be accessed as explained below.

The Caps Lock key gives three long followed by two short blinks, which according to this article suggests that "the embedded controller times out waiting for BIOS to return from memory initialization," or possibly a general system board failure.

As my computer does not have a removable battery, I followed the suggested protocol (by the HP Virtual Agent) of disconnecting the AC adapter and all connected peripherals, holding the power button for 15 seconds, and then reconnecting the AC adapter and powering back on. I also took the computer apart, removing each of my 2 RAM sticks one at a time, as well as testing with an extra 4 GB RAM stick that the computer originally came shipped with. Using the HP Hardware Diagnostics UEFI, I ran processor, memory, and system board tests, all of which passed. None of these solutions appeared to help.

Here's a general idea of what happens, captured from within the BIOS (the issue appears to be universal-it's happened within the OS as well). This is very rare, however: I usually can't even get into the BIOS or the OS at all. The colored lines and pixels do change in pattern, which would be kind of cool to watch if it wasn't my computer. 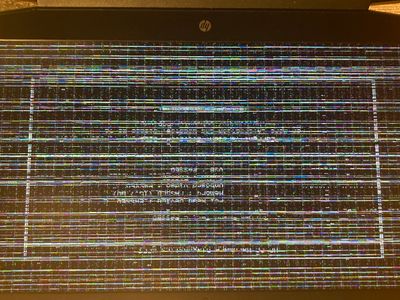 This product is out of warranty (I purchased it in August 2020 for around $900 to my recollection), which appears to mean  that it is no longer eligible for official HP support. With that said, if that matters at all, I've always been careful with it, keeping it in a case when I go to school, and I've never dropped it. Is there anything that I can do to fix it, or do I have to buy a new computer? Thanks for all of your help in advance. Please let me know if you want any more information.

I appreciate your efforts to try and resolve the issue, and in order to fix this issue,  your computer needs to be serviced.  As we have limited support boundaries in the support community as of now,

As this is a hardware issue, I'd suggest youContact HPin your region regarding the service options for your computer.