It has been a while since anyone has replied. Simply ask a new question if you would like to start the discussion again.
Highlighted
dharnnycee
New member
5 4 0 0
Message 1 of 13
7,046
Flag Post

I got an Elitebook 2540p(corei5, 4gb RAM)fairly used which has lasted for me fairly 2 years now.

I slept off while using it yesternight, luckily for me it went to sleep to save power.

Buh unluckily for me, I couldn't wake. So I had to remove the battery and try a hard reset thinking it was going to come on. But to my suprise, it didn't. The only LEDs on were the hard drive, wirless and charging LEDs. Each time I try to to power it on, the power LED doesn't come on.

I'm stranded here because I have a work to deliver 4days from now.

I'll be grateful for a quick response.

my guess is the power ac was lost and the batter died, not sleep , it died , battery discharged.

the power button does nothing

my w10 comments are only to tell you HP does not support w10 on this platform, period,  and the ramifications of all that.

my  elitebook screams too on w10, but many things are dead, a list  10 things I have, but my guess is you have no need for those 10 things (like the HP security package is dead  and more)

my guess now , I cant watch it fail.,

or power jack cracked, at mobo.

and BIOS is dead due to no power , now.

forget my w10 comments its not cause, for sure, just a heads up on facts related to w10.

the 40p is LED screen I think, not CCFL that love to die.

the goal is first to get BIOS working can you,  step above and if that works what (see the diagnostic is bound by logic)

BIOS ok and its  CMOS coin cell battery ok , the PC can boot any thing.

we next boot a Linux disk (free) to prove the PC is ok and that he HDD is ok.

if BIOS works run the HDD test in the BIOS pages....

first. if BIOS is ALIVE that is.

here is my elitebooks , doing HDD test this is BIOS screens,

what happens with the power key

if silent, the power pack is dead.

or its power does not reach the Mobo.

your mobo has this horror I see.

see that power jack, unlike my nicer 8540w, it has no flex cable, protecting this.

and push power button each time,  if power turns on this jack below the solder pins are cracked.

seen  vast LT do that,,, all really, but never mine. mine has the HP protector , jumper there. (a flex buffer i call it)

if you can hear the fans spins as you flex this point of entry the jack is bad.  (so common)

tell more,  so far i know almost nothing yet.

and the power lamp dead.

The power button does it's work by switching on the system but the fan rolls for a moment and stops, the screen doesn't light up at all.

well there are 2 paths here 3 counting get it repared in a shop.

that is a test.

why not do simple tests.

and have a spare power pack,  i travel all over the world now, and carry 1 extra pack and 1 extra battery.

my trips last for 1 full month too.... retires guys can do anything... love it.

2: buy a voltmeter test the 19vdc power at the PC mother board edge,  if that is good the problem is deeper.

if that edge power jack is ok,  some fail, its common,  I avoid PCs set up that way, sure do.

for that very reason.

a 65watt or more pack works

the pack is bad, or the input wire to it are broken inside the plastic inslation,

on both ends,  of the pack

but what matters only is the 19vdc deal on the mobo , it MUST ARRIVE THERE.

or NO power no joy happens.

no PC runs lacking full power, none.  (even solar power is possible but is power non the less)

the fan stalling tells me BIOS is shutting down early,  its programmed to run the fan fast until the OS can take over,

The BIOS assumes you are running freeDOS, (HP sells them like this) and FREEDos does not control fans out of the box.

so BIOS runs the fan and watches for overheating, so runs it fast.

some go fast the roll to 1/2 speed, onces it sees it has some control of temperatures, of CPU and GPU chips

so the power is bad. (there are other causes,  eg., shorts on things connected to the MOBO) im not teaching A+ certs here.

is it too much to get a new power pack or flex the cables ends like   I asked.

that be simple no?

or use a voltmeter.

if 10vdc the pack is bad or mobo has a short. (we strip them all down to find this, ask of motivated)

the desktop and laptop do have thing in common

the Laptop has many voltage regulators that send proper voltages to all chips.

and  charger chip, to battery.

the laptop turns on, mine has  tiny smart processor just for power controls, that can flash LED codes.

this tells the Power chip to turn on.

the chip turns on all power, and the CHECK that power is at spec, (means voltages are in spec)

if any rail  or any regulator in the MOBO is in over load status or over voltage it detects that and shut the PC off.

this magic prevents the expensive chips from blowing up.

the BIOS works only when full power happens and sustains, and the runs POST.

the BIOS loads and sends messages to the screen.

so if power is weak into any PC the power processor sees that and stalls.

a tech knows that and finds out of the ac pack is good first.  we tests it.

if that passes we see if the makes it fully onto the mobo...

or we use a good charged battery to see if LT runs that way.

if looking for just wild guesses?, IDK try a new power pack is my one answer here.

even remove ram all 4 and try them 1 by one. the key here is keep it cool do not run fan remove or heatsinks defeated. 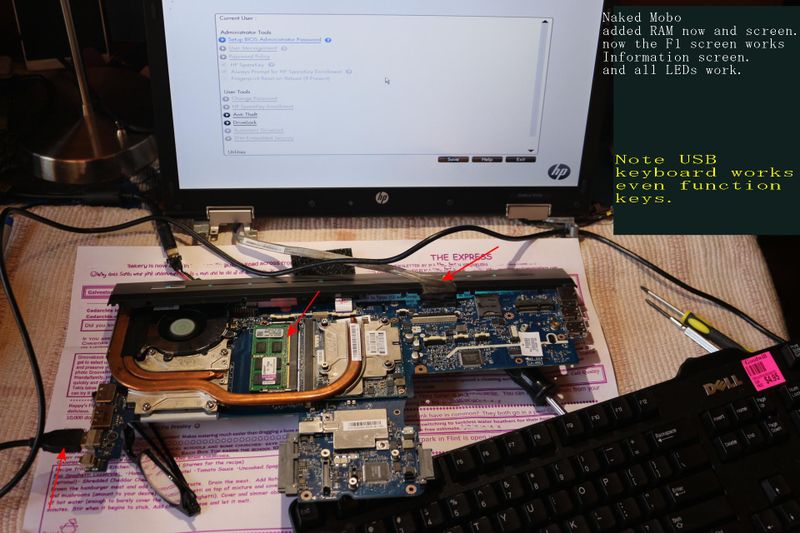 Thanks for your help.

But I took it to a repair tech and he said it's got to be liquid damage.

But I'm not sure if there was anytime at all liquid got into it.