My Laptop, a supposed powerhouse, is getting seriously bogged down every time I am on a Google Meet video call. After about 15 minutes or so the thing just becomes unusably slow.

I've only noticed this happening over the last month or so.

This does not happen on Zoom or even MS Teams video calls.

I've done some investigation, and it appears as if my CPU gradually clocks down to about 600MHz during the course of the call. See the attached image. 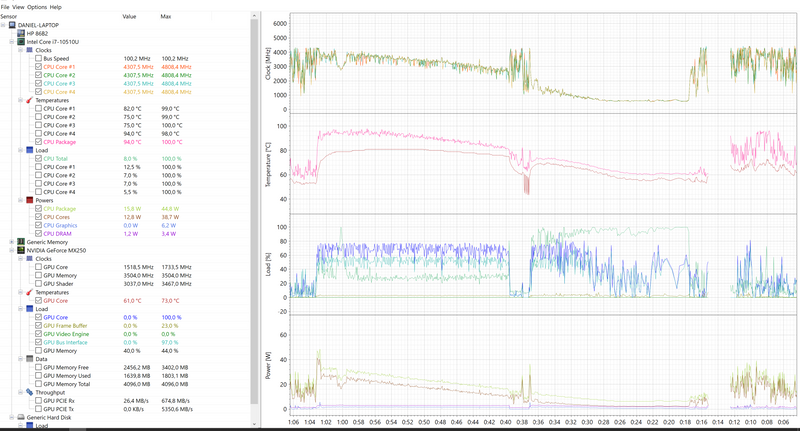 The spike in the middle is me moving from one call to another. The gap in the graph near the end is a system reboot.

The laptop is not overheating and thus thermal throttling, as you can see my temperatures are lower during a google meet call, compared to idle!

I only have a couple of browser windows and tabs open. There is nothing resource intensive running.

I've tried changing the HP Command Centre power settings, it makes a difference then after a while things go downhill again.

Any help here would be appreciated. Under current covid conditions I am on video calls most of the day. Not being able to use my machine for that makes it pretty useless.

Thanks for providing me with some troubleshooting. I have done most of these already in an attempt to resolve my issue, but as requested I will do them again and report back on what happens.

I have now done all the things you asked me to.

I will report back if this resolves my problem. I first need to have a couple of long video calls again before I can know for sure.

Echo_Lake, I'm afraid your assistance has not helped me.

I had a 20 minute google meet call today, and here are the stats during that time: 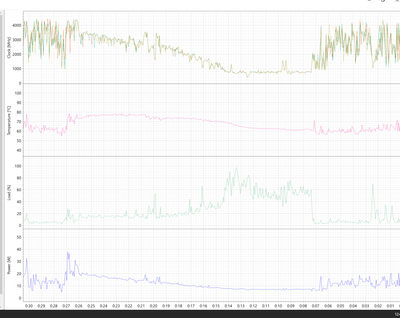 My laptop became almost unusable for the last couple of minutes during the call.

It's clear that for some reason my machine lowers it's performance during the call, and not because it's thermal throttling or anything.

I would request you to contact our Support and our Support Engineers should be able to Remote into your computer and sort this out. HP Support can be reached by clicking on the following link: www.hp.com/contacthp/

Thanks for pointing me in this direction. I am afraid it was a dead end. I was advised by the website that I need to make use of the WhatsApp chat functionality, and I did so. See the below chat log: 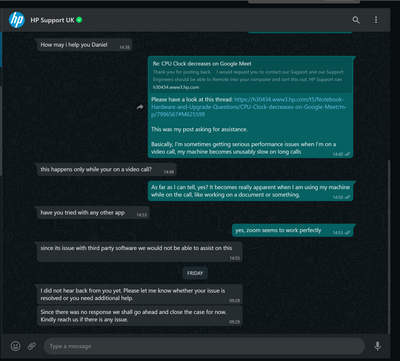 I was not really interested in engaging further with them after such a flippant dismissal of my query.

I think some updates to my situation might also help everyone.

I had a 40min Google Meet Call this morning. Performance seemed fine, and it appears as if my CPU clock did not dip below 2GHz. 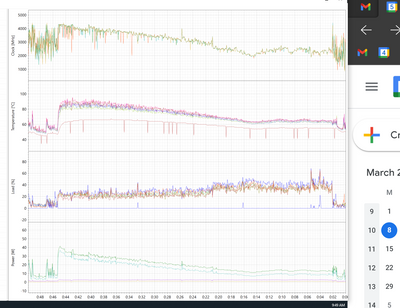 During this time, my laptop did get physically crazy hot, especially around the right side vent. I don't have a thermometer to measure, but it's borderline uncomfortable. I will not be able to put it on my lap while using it like this. I have ensured that it gets adequate airflow.

I am developing a suspicion that it's the integrated Intel graphics that is getting very hot, and causing the CPU to thermal throttle, even though the CPU itself is not extremely hot. I disabled hardware acceleration from within my browser's settings, and this seemed to help to some degree. Last week I had a Zoom call and had similar crappy performance, until disable hardware acceleration from within Zoom, then things got better.

Looking at the Windows Task Manager, I can see there are things still making use of the integrated GPU. The following screenshot was taken after the call. During the call the GPU usage for the "Client Server Runtime Process" and the "Desktop Window Manager" was above 50% together. I am not sure why these things use the GPU, and what their purpose is. Maybe it's normal. But I am really starting to suspect that whenever the integrated Intel graphics is being used, that it rapidly overheats and then my machine's performance tanks.

I appreciate your efforts to try and resolve the issue. This sounds like software conflict with CPU drivers, I would suggest performing system factory reset will put the computer back to the original factory settings in this way all corrupted and outdated software will be removed.

While doing the recovery there is an option to back up your personal files. If you have not previously done one now is a good time.

Hello @Echo_Lake - thank you for your patient assistance so far.

I have done a full format and reset last week. I completely wiped the machine and installed a fresh copy of win10 pro on it, using a separate license key and all.

This did not resolve my pains I'm afraid.

I've learned more things since then. It seems like certain types of video rendering is what is tripping up my machine. Google Meet and Zoom makes use of this video codec or something. I can launch multiple tabs of webgl demos and things on Edge, and my machine could not care less, rendering them all at 60fps. But the moment I get on a video call, the framerate drops and everything starts falling apart. When this happens, the "Desktop Window Manager" process starts eating 30-60% of my gpu capacity.

As a test, I disabled my internal nvidia gpu, so that only the Intel UHD gpu is there to process things. This appears to have made things better, but I'm not sure yet.

I'm going to run some GPU benchmarks and re-install the nvidia card, then report back with my findings.

I am glad to know that you managed to isolate the issue. Please reach out again for any further assistance.

Have a nice day ahead.